A couple of weeks ago I wrote an article for the Unz Review entitled âThe Empire should be placed on suicide watchâ. As always, I also reposted it on my blog. One of the commentators, J.L. Seagull posted a comment which intrigued me. He wrote:

(â¦) we continue to be trapped in an illusion that we are still a massive power and can simply âpull throughâ the current state of things, as if it is a little speed bump rather than the beginning of the end.

I agree with the Saker. All that is needed is a single, concrete military failure for that hallucination to be totally shattered. John Michael Greer described precisely how this can happen in his book âTwilightâs Last Gleaming.â If the American military were to fail, the illusion of a united country would dissipate before our eyes and the country would be gone within weeks â either in a peaceful breakup or a violent one, depending on how Washington would attempt to respond.

This got me very interested in the book he mentioned. While I personally had a pretty clear idea of how the US could completely collapse and break-up, I had never heard of such a hypothesis discussed in details in an English language text, and even less so in a fiction book. I ordered the book and two days later I began reading it. And what a fascinating book it turned out to be. 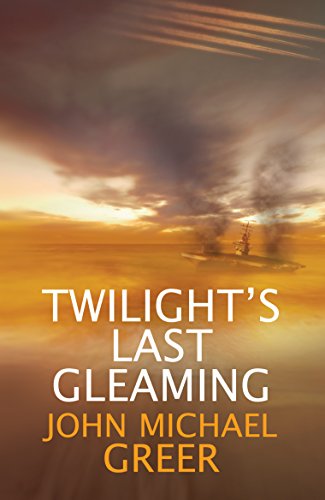 I don’t want to give away the entire plot as I hope that many of you will decide to get the book, but I will just say that I find the book highly realistic: it begins by a supposedly âeasyâ military attack by the US military on a weak and more or less defenseless country which turns into a disaster due to a fundamental miscalculation. At that point, the USA does exactly what the opposing side predicts and doubles-down and that turns out to be a fatal mistake which, through a domino effect, ends up in the dissolution of the USA.

[Sidebar: those who will not read the book or don’t care about finding out the details of the plot can go and check it (spoiler alert!!) by clicking here]

The book is highly realistic in the sense that the author clearly did an excellent job researching his topic and because each âdomino fallâ is, by itself, credible. Truth be told, the author does assume that each time before the next domino falls the President commits yet another blunder or, at least, does not take correct action. Is that realistic? Well, when I see the kind of Presidents the US has had in the past couple of decades I would say that yes â this assumption is realistic. Still, what Greer’s describes is a âperfect stormâ and we can all hope that in the real world such a crisis could be averted.

There two aspects of this book which I find the most remarkable.

First, Greer clearly points to a mindset of imperial hubris as the main cause for the eventual collapse of the US.

Again, I don’t want to go into the details because the book is a real page-turner and I hope that you will read it with as much enjoyment as I did.

I think that Greer ought to be commended for his courage for pointing out at two sources of US weaknesses which are considered as sacred cows by most US authors: arrogance and technology. Instead of seeing them as a source of strength Geer correctly identifies them as a source of weakness for the USA. This will probably be very counter-intuitive for many, and border on crimethink for some.

I think that it was the correct thing to do to hope that Trump could take action to avoid the kind of disaster the book describes. His campaign promises clearly indicated that another foreign policy was at least considered. Now that the Neocons and the US deep state have thoroughly crushed him Greer’s book takes on a new quality â the one of possibly being prophetic, at least in its general features (the book was written in 2015).

There is another topic which Greer discusses in his book, the one of a possible constitutional convention. While the idea of a constitutional convention has been floated around by all sorts of people and interests groups â all for different reasons â very few understand the immense danger of such an exercise. If you are not familiar with the topic, I would highly recommend the very interesting Solari Special Report on this topic with Catherine Austin-Fitts and Edwin Vieira Jr (you can listen to the audio of the show or read the PDF transcript). Greer does a great job showing how such a convention could result in a complete break-up of the United States.

I had never read a single book by Greer and I knew nothing about him. I imagined him to be some kind of ex-military guy who know wrote fiction books. To my immense surprise, the turned out to be, according to Wikipedia, a person who âserved from December 2003 to December 2015 as the Grand Archdruid of the Ancient Order of Druids in America, and since then has focused on the Druidical Order of the Golden Dawn, which he founded in 2013â and a specialist of the occult! I guess that this explains his, shall we say, ânon-mainstreamâ views but still, that was quite a surprise for me.

In conclusion â the book is well written, immensely entertaining and, I think, very thought-provoking. I highly recommend it.

If you are interesting in finding out more about the author, check out his blog here:

It is interesting too, well worth a visit.

Truth About Tanks: How NATO Lied Its Way to Disaster in Ukraine
Scott Ritter
• 308 Comments • Reply

← The Trump Administration Goes Neocon-CrazyA Multi-Level Analysis of the US Cruise... →
Current Commenter
says:
Current Date at Time Now
Leave a Reply - Comments on articles more than two weeks old will be judged much more strictly on quality and tone
Cancel Reply
Commenting Disabled While in Translation Mode