Joe Biden enjoys a double-digit lead over incumbent President Donald Trump because he promises a return to normalcy â not the platonic ideal of objective normalcy in a country that doesn’t torture or spy on its citizens or let them starve because their coding chops are a few years out of date. Americans desperately want to resume “normal” political life as Americans knew it before the last four years of manic presidential tweetstorms, authoritarian strongman antics and pandemic pandemonium. As Michigan voter Katybeth Davis told the Guardian, “I just want it to be over with. I really do.”

Be careful what you wish for. Things could get even crazier under Biden.

Even though it’s only a few weeks away, I am hesitant to call the election. Biden has a huge lead in the polls, but Trump has an ace in the hole: an unprecedented volume of mail-in ballots due to the COVID-19 pandemic, which will run predominantly Democratic and provide attractive targets for Republican attorneys to drag out state vote counts past the Dec. 14 Electoral College certification deadline, which would trigger the obscure 12th Amendment scenario where 50 states each get one vote for president in the next House of Representatives, in which case Trump would win even if Biden were to win the popular vote by a lot.

But let’s assume Biden prevails. Let’s say it’s a blue-wave election and the Democrats expand their majority in the House and take control of the Senate. What happens next? Revolution, maybe.

Revolution would certainly be likelier under Biden than under Trump.

One of history’s least-discussed ironies is a counterintuitive pattern: It is not the vicious tyrants who are overthrown by angry mobs but well-meaning liberal reformers who promise to fix a broken system and fall short of expectations.

A Biden administration would face several daunting existential challenges. Unlike former President Barack Obama, whose high approval rating at inauguration prolonged his political honeymoon into his second year, Biden will enjoy little to no support from Republican voters or elected representatives. Progressives will pressure him from the left. Worse, he will inherit problems that have been neglected or exacerbated for so long that no solution will be able to come fast enough.

A president who will have achieved victory by campaigning against his predecessor’s mishandling of the coronavirus pandemic will be expected to quickly turn around the ongoing medical and economic disasters with lightning-quick results. Like Obama, Biden has promised to add a “public option” to the Affordable Care Act. He’ll need to do that right away. That’s only the beginning: The ACA will collapse unless Congress vastly increases premium subsidies to middle-class patients and orders national Medicaid expansion.

The $600-a-week supplemental unemployment benefits that both parties allowed to expire during the summer will have to be replaced in some form. There will need to be meaningful broad-based relief for distressed renters and homeowners facing eviction or foreclosure. Without an infusion of cash, millions of people who formerly belonged to the middle and working classes will become homeless, adding to social and political instability. Billions will have to be pumped into the economy in the form of direct stimulus checks to every man, woman and child. The alternative is economic collapse.

The presidency, of course, is about more than policy. Many Americans who believed in exceptionalism a few years ago are wondering aloud whether the U.S. is literally over and done. During times of crisis, leaders are called upon to reassure citizens that a wise and steady hand is at the helm and that a team of intelligent and innovative advisors is running the show behind the scenes.

Can Biden deliver? On most fronts, probably not.

The Democratic Party is too beholden to its corporate donors to enact the FDR-style stimulus and social programs that are required to dig us out of an economic hole filled with tens of millions of newly unemployed workers and 1 out in 5 businesses that have gone broke. Biden comes out of the Clinton/Obama/Democratic Leadership Council austerity wing of his party. His instinct will be to spend as little as possible in order to try to balance the budget.

“When we get in, the pantry is going to be bare,” says Ted Kaufman, who would run the transition office that would select Biden’s top personnel. “When you see what Trump’s done to the deficit … forget about COVID-19, all the deficits that he built with the incredible tax cuts. So we’re going to be limited.” Kaufman, a former Delaware senator, promises that Biden won’t significantly increase federal spending.

The streets are already seething. Austerity will bring things to a boil.

The Soviet Union didn’t collapse under Josef Stalin. It couldn’t have. He would have ruthlessly crushed any meaningful opposition. Nikita Khrushchev and Leonid Brezhnev presided over graduated liberalization, but it was under Mikhail Gorbachev, architect of perestroika, that the USSR went out of business. Gorbachev, arguably the best, brightest and most decent premier the Soviet system could allow to come to power and the best the Russian people could hope for, failed to deliver the improvements in living standards and personal freedoms people wanted and needed. It was precisely the fact that he was so excellent yet couldn’t deliver that exposed the corruption and incompetence inherent to the system.

Neither Khrushchev nor Brezhnev nor Gorbachev were the problem. The system itself was. It had to go.

Similarly, the French Revolution couldn’t have succeeded under Louis XIV; the Sun King was too brutal and autocratic. Louis XVI attempted numerous reforms to make life better for the French, including the free distribution of grain, slashing the royal budget and the abolition of torture and servitude. He granted equal rights to Jews and Protestants, tried to tax the nobility (they refused) and began a transition toward parliamentary monarchy as in Great Britain. But the reforms were insufficient; internal forces were intransigent; and resentments had built up for too long. The French were hungry and angry, so Louis XVI lost his head to the guillotine.

So it went in Russia. Although Czar Nicholas II was a bit of a clueless dolt, he recognized the crisis and desperately tried to save a collapsing system. He introduced civil liberties, worked to increase literacy, granted representation to local districts throughout the country and modernized the empire’s infrastructure. Again, it wasn’t enough. He destroyed the economy by squandering the treasury on wars of choice, refused to consider democratization and ultimately succumbed to the resistance of shortsighted Russian aristocrats. Lenin and the Bolsheviks had long argued that the Russian government was corrupt and unwilling to provide for the needs of the people. Only when Nicholas II’s reforms proved to be too little, too late did they agree and rise up.

Like Gorbachev, Louis XVI and Nicholas II, a President Biden would disappoint at the worst possible time. 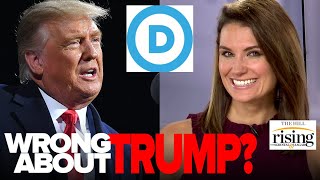 Biden Will Fail to Bring Back "Normal" Politics. Whatâs Needed Now Is a Populism of the Left
Jonathan Cook
• 48 Comments • Reply Second Place In the "I Hate Racism" Contest
Eric Striker
• 37 Comments • Reply
← President Trump Neither Needs Nor Deser...When a Country Reeling from Crisis Turn... →
Hide 36 CommentsLeave a Comment
"Deluge After the Donald?"
• 36 Comments
Commenters to Ignore
Commenters to ignore (one per line)

← President Trump Neither Needs Nor Deser...When a Country Reeling from Crisis Turn... →
Current Commenter
says:
Current Date at Time Now
Leave a Reply - Comments on articles more than two weeks old will be judged much more strictly on quality and tone
Cancel Reply