Instead of Saying "Anti-White Racism," Conservatives Should Just Say "Anti-White"
Andrew Anglin • September 1, 2022
• 1,400 Words • 56 Comments • Reply
âRacismâ is a word that should really just not be used ever again by anyone on the right. Recently, people on the right, led by Donald Trump, Tucker Carlson and others, have started referring to the Democrats as âracistâ for being anti-white. This isnât necessarily wrong, but itâs confusing and pointless. If youâre talking about... Read More

The Death of Historical Accuracy
Dinesh DâSouzaâs Movie, âDeath of a Nationâ
Boyd D. Cathey • August 17, 2018
• 2,300 Words • 292 Comments • Reply
In case you havenât heard, there is a new âconservativeâ film out; it is titled âDeath of a Nation: Can We Save America a Second Time?â Its director and screenwriter is Dinesh DâSouza, the word-measuring figure who occasionally shows up on Fox to talk in pious tones about âconservatism.â He is the movie producer who,... Read More 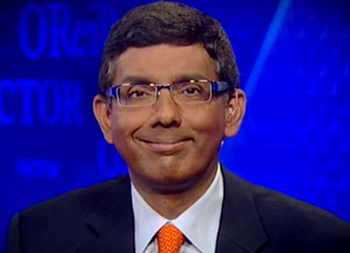 Dinesh DâSouzaâs Epic Doozie
Ilana Mercer • August 14, 2015
• 800 Words • 155 Comments • Reply
There are certainly good things about Dinesh DâSouzaâs film "America: Imagine a World Without Her," as sharp-eyed critics like Jack Kerwick have observed. But those donât matter much for this reason: The central question asked and answered by the film maker is premised on an epic error of logic. But first, in honor of Bad... Read More

Dinesh's America
Paul Gottfried • July 19, 2014
• 1,900 Words • 38 Comments • Reply
It seems that the prolific and effusive America-apologist Dinesh DâSouza has succeeded big-time with a movie about America, which was taken from a book that proclaims the same theme. As a âconservative,â Iâm supposed to swoon over this movie and the book that preceded it, predictably put out by the GOP publishing house Regnery. Both... Read More
"Dinesh D\'Souza" Items Across Entire Archive
PastClassics