STILL No Non-Chinese Deaths from Coronavirus, But the WASHINGTON POST Wants You to Rat Out Your Neighbors Anyway
Lance Welton • February 8, 2020
• 1,300 Words • 175 Comments • Reply
Earlier by Lance Welton: Do You Know All Coronavirus Victims Appear To Be Chinese? Thought Not! I have previously reported the case of Dr Noah Carl, a young Cambridge University political scientist whom the once-august university fired for publishing peer-reviewed research on the subject of âraceâ and for collaborating with like-minded academics. One paper of... Read More

Some Countries Are Just Prone to Scientific Fraud. So Are Their Immigrants to the West
Lance Welton • November 23, 2019
• 1,400 Words • 33 Comments • Reply
Scientific fraudâfalsifying scientific data or manipulating the scientific evaluation processâhas become a serious problem. At best, it is a threat to public confidence in science. At worst, if the fraud is not revealed, then public policy could be shaped by bogus data. This problem is universal. But there are distinct national patterns. In particular, fraud... Read More

Does the West Have A âGenetic Interestâ In Supporting Chinaâs Uyghurs?
Lance Welton • October 12, 2019
• 1,500 Words • 48 Comments • Reply
See, earlier, by Linda Thom: Unrest In UrumqiâA Californian Draws A Dark Lesson For Her Own State Thereâs an old stereotype that âall Chinese people look the same.â However, what people really mean is that Han Chinese people, who make up 91% of the population of the Peopleâs Republic of China, look the same. There... Read More
MAY DIARY: Canada Road Trip; the Courage, Intelligence and Beauty of Faith Goldy; Deb's Days Numbered; ETC.
John Derbyshire • June 4, 2019
• 4,400 Words • 62 Comments • Reply
What better way to welcome summer than with a road trip? The Mrs and I closed out the month with a nine-day tour around Lake Ontario. Kind friends in upstate New York allowed us to use their house as a base camp. We drove up there from Long Island, stayed overnight with them, then headed... Read More

WHATâS WRONG with CHINAâA Study of Unchanged National Character
John Derbyshire • February 18, 2018
• 2,900 Words • 666 Comments • Reply
The Chinese sure can be exasperating. Paul Midler writes in his new book Whatâs Wrong with China: (Laowai is the commonâinformal, non-hostileâChinese term for a foreigner, equivalent to Japanese gaijin. Pronunciation here. During my own China days in the early 1980s the usual expat term for the syndrome under discus 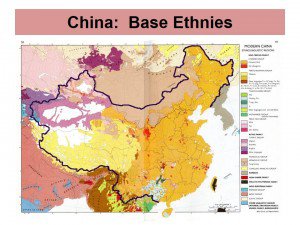 On China, America, and the Chinese in America
John Derbyshire • May 4, 2014
• 3,000 Words • 2 Comments • Reply
[This is the text of a talk I gave to the American Renaissanceconference on April 26th, 2014. The talk was organized around PowerPoint slides, links to which are scattered through the text. As is always the case, the delivered talk differed somewhat from the text here. AmRen will be posting the talk on on their... Read More
"Chinese" Items Across Entire Archive
PastClassics