Like many Lynch fans, I was slow to warm to Fire Walk with Me. I never thought it was a bad movie, just an unpleasant one. I missed it in theaters when it was released in 1992 and saw it only on VHS. I bought the DVD, but I donât think I ever watched it. Then I bought the Blu-ray, which I never watched until after I finally saw the film on the big screen in a film festival. Then it hit me: Fire Walk with Me belongs in a special category of films like Vertigo and Grave of the Fireflies: dark films that are so well-done that it is hard to enjoy them.

I have trouble ranking David Lynchâs work. Blue Velvet is easy to place at the top, Inland Empire at the bottom. But between them, there are only two categories: the mixed, including Dune, Lynchâs Twin Peaks episodes, and Twin Peaks: The Returnâand the excellent, which includes everything else Lynch did, including the Twin Peaks pilot and Fire Walk with Me.

There are several reasons why Fire Walk with Me flopped.

First, it wasnât as light as Twin Peaks. It lacked the quirky characters and offbeat humor of the series. Kyle MacLaughlin and Peggy Lipton both felt this way about the film. So did the critics. So did the viewers. There are two reasons for this effect, one deliberate, one accidental.

The first thirty-three minutes of Fire Walk with Me are set a year before the Twin Peaks pilot in the town of Deer Meadow. Then the movie jumps ahead one year to the last seven days of Laura Palmerâs life.

Lynch conceived Deer Meadow as the anti-Twin Peaks: the people are ugly and unfriendly, the town is cheap and seedy, and the coffee sucks. Hapâs Diner is no RR: the manager is old and unpleasant, the waitress is old and unsavory, and there arenât any specials. The sheriff, his deputy, and his receptionist are polar opposites of their lovable equivalents in Twin Peaks.

FBI agent Chet Desmond is dispatched to Deer Meadow to investigate the murder of Teresa Banks. Chris Isaak is excellent as Desmond. He is a wholesome-looking, all-American type like MacLaughlinâs Dale Cooper. But Desmond is smug and condescending to his assistant, Sam Stanley (Kiefer Sutherland) and metes out brutal but well-deserved violence to the sheriff (in a deleted scene) and his deputy. (Stanley, however, is a nice guy, which is a pleasant inversion of Cooperâs assistant, Albert Rosenfeld.)

I found the whole sequence extremely droll, especially Harry Dean Stanton as Carl Rodd and Sandra Kinder as Irene the waitress (best line: âItâs what you call a freak accident.â). But apparently others found it off-putting.

Once the setting switched to Twin Peaks, Lynch filmed a number of scenes with favorite characters from the series: Ed and Norma, Lucy and Andy, Truman and Hawk, Pete Martell and Josie, etc. But he had to drop them due to the running time. (The extended and deleted scenes are available on the Blu-ray releases.)

This brings us to the second reason Fire Walk with Me failed. Once Lynch dropped the light moments from the final cut, naturally what remained was quite dark. The series worked because the darkness cast by the murder of Laura Palmer was offset by the lighter characters and subplots. When the Palmer murder was solved, the series became silly and flopped. Fire Walk with Me suffers from the opposite malady: unremitting darkness.

Not only did Lynch drop the lighter elements of the series, he also put on screen what existed only in the backstory of the series: incest, rape, and finally the murder of Laura Palmer. Fire Walk with Me really belongs in the genre of horror, both supernatural and psychological horror, undiluted with the camp elements of slasher flicks. It was just hard for a lot of people to take. This is the view of Al Stroebel, who played the One-Armed Man. People were not prepared for the darkness.

Another reason for the poor reception of Fire Walk with Me is the Christian religiosity of the film. Laura Palmer speaks of being abandoned by a guardian angel, falling through endless space, and bursting into fire. In her bedroom, there is an illustration of children with a guardian angel. Laura looks on in horror as the angel disappears from the picture.

In the terrifying scene in the train car where Laura is murdered, Ronette Pulaski prays: âFather, if I die now, please see me. Donât look at me. Iâm so dirty. Iâm not ready. Iâm sorry. Iâm sorry.â Then Ronette has a vision of an angel. Then her bonds become severed. The One-Armed Man bangs on the door of the train car to get in. Ronette tries to escape, is knocked unconscious, and falls from the train. But she survives.

When Laura is murdered we hear Cherubiniâs Requiem. At the very end, Laura and Dale Cooper are in the red room/Black Lodge. Laura is seated. Cooper stands near her protectively, with a benign expression. Then Laura has a vision of an angel, a different angel than the one seen by Ronette. Laura cries but then through her tears begins to smile and laugh. It is a moment of catharsis, of redemption. Laura has died, but her soul was saved from the possession that turned her father into a monster. Again we hear Cherubiniâs sublime music. The End.

Most movie critics are allergic to this sort of stuff. It may explain the boos and hisses when the film was screened in Cannes. (Robert Engel, the co-author of the script, denies it happened.)

A fourth element that some found off-putting is the relentless hermeticism of the movie: the blue rose, the mysterious ring, the room above the convenience store, the Red Room, the One-Armed Man, the Little Man from Far Away, Mrs. Tremond/Chalfont and her grandson, the Formica table, Judy, the monkey face, the disappearance of Chet Desmond and brief reappearance of Philip Jeffries (David Bowie), and, of course, the creamed corn. I find it fascinating and plan one day to tie it all together in a commentary, but for a lot of moviegoers, it was a bit much.

Finally, anyone who watched the series knew what was coming in the movie. People who donât like spoilers couldnât really look beyond that fact. 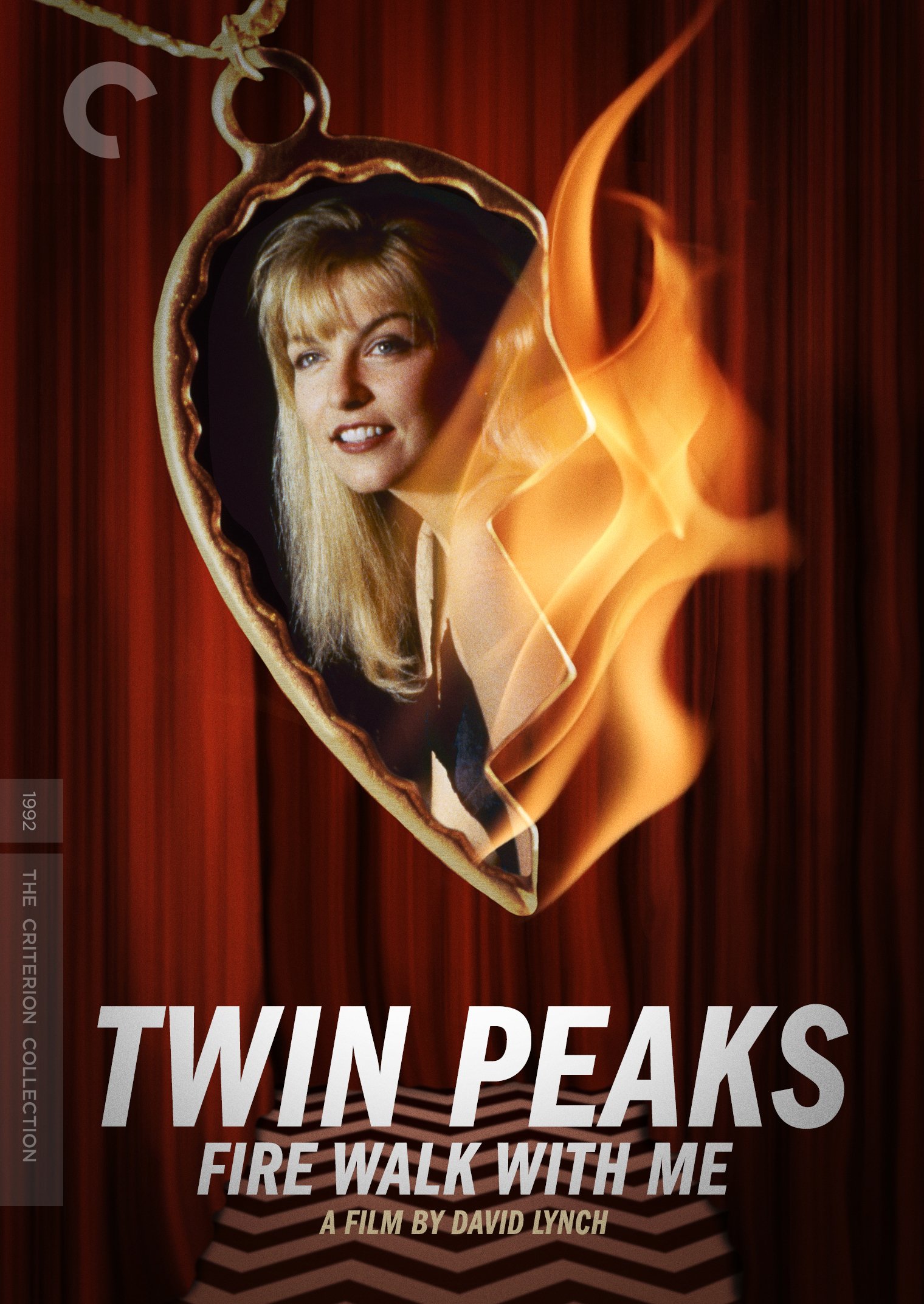 But now that you know what you are getting into, I urge you to give Fire Walk with Me a chance. Ray Wise, Grace Zabriskie, and Sheryl Lee give outstanding performances.

First, there is Laura Palmerâs dream induced by the mysterious picture given to her by Mrs. Tremond/Chalfont. Lynch is one of cinemaâs supreme masters of the dream sequence: more than half of Mulholland Drive is a dying womanâs dream. In Mulholland Drive, Lynch brilliantly constructs a wish-fulfillment dream that collapses in on itself, ultimately because reality is very different. In Fire Walk with Me, the dreamâs logic is less psychological than metaphysical. It is revelatory. Laura is remembering and collating experiences, but there is something more: a message from outside her consciousness entirely. The false waking (Laura dreams she has awakened) is particularly effective.

Second, when Leland and Laura Palmer are driving, they are menaced by the One-Armed Man who screams to Laura âItâs your father!â (He also screams to Leland âYou stole the corn!â) The revving engines, squealing brakes and tires, and Badalamentiâs keening electronic music will have you on the edge of panic.

Third, there is the terrifying murder, which in terms of technique and effect should be ranked with Hitchcockâs shower scene in Psycho. Again, the music and sound design will take you from hell to heaven and back instantly.

Lynch made Fire Walk with Me because he wanted to go back to the world of Twin Peaks. So did his audience. But instead of delivering damn fine coffee and cherry pie with a scoop of nostalgia on top, the logic of the story led him into a Stygian darkness where the critics and audiences did not want to follow. Thatâs a shame, because once you walk through the fire, the angels win out in the end.