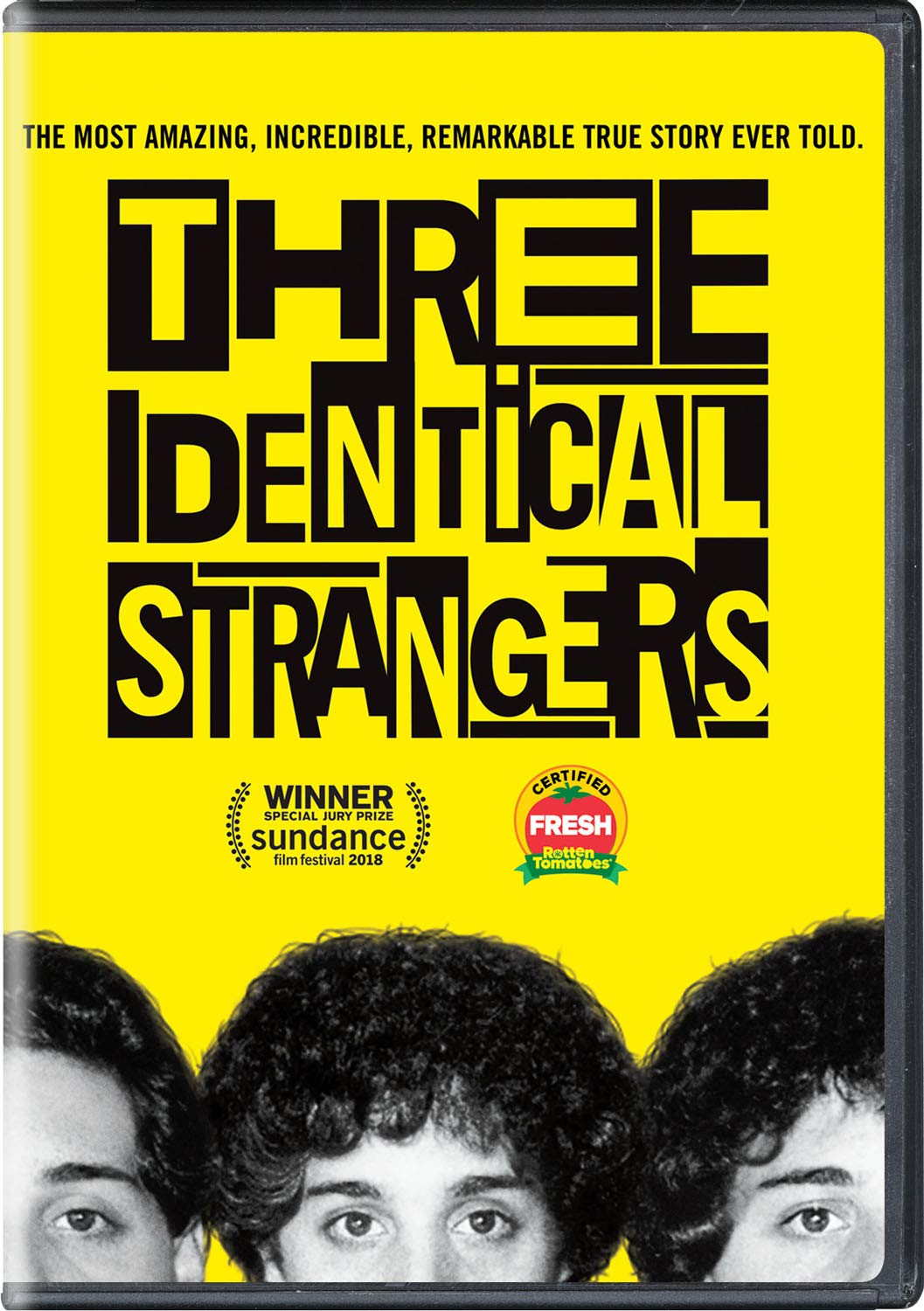 Three Identical Strangers is a 2018 documentary directed by Tim Wardle. It premiered at the 2018 Sundance Film Festival, where it won the U.S. Documentary Special Jury Award for Storytelling. You can now watch it online at Amazon.com.

The documentary tells the story of Edward Galland, David Kellman, and Robert Shafran, identical triplets who were separated shortly after birth. (There was actually a fourth brother, who died at birth.) Born to an unwed Jewish mother, the brothers were placed by the Louise Wise Adoption Agencyâwhich specialized in Jewish adoptionsâinto three rather different Jewish homes, the Shafrans, headed by a doctor; the Gallands, headed by a school teacher, and the Kellmans, headed by a shopkeeper, all of whom had different levels of education and income.

The boys were reunited by accident when they were 19 and became a media sensation. The story of their reunion is quite touching. The boys had never experienced blood kin before. And beyond that, they were genetically identical, so they were not just meeting their brothers, they were meeting other selves. Naturally, they shared a lot in common: their expressions, their gestures, their reactions to the same events. They knew their brothersâ thoughts and could complete their sentences. They all wrestled in high school. They had same tastesâin colors, cigarettes, drugs, alcohol, and women.

To make up for lost time, the triplets got an apartment together in New York City. (One image shows them sleeping in the same huge bed.) Later, they opened a very successful restaurant called Triplets.

This segment of the movie is quite entertaining and heartwarming, and it is an excellent way to introduce normies to biological determinism and Genetic Similarity Theory.

Of course this particular story is not the only case of identical siblings raised apart. There is now a quite vast literature on the subject. The best summary of these studies is Nancy Segalâs Born TogetherâReared Apart: The Landmark Minnesota Twin Study (2012). I also recommend her highly entertaining popular books, Entwined Lives: Twins and What They Tell Us About Human Behavior (2013) and Indivisible by Two: Lives of Extraordinary Twins (2007). These studies provide crushingly persuasive evidence of fine-grained hereditary determinism, which refutes the âblank slateâ theory of environmental determinism.

Blank slatism, of course, is the foundation of a host of modern political ideologies and social engineering projects. If people basically have the same potential, then different group outcomesâfor instance, low black IQ and high black crimeâmust be due to inherently discriminatory social environments, which can be identified by social science and corrected by social engineering, so outcomes will be equalized. The failure of generations of egalitarian uplift programs is simply attributed to increasingly occult forms of social discrimination.

But if heredity is more important that environment in determining factors like intelligence and criminality, then modern egalitarianism is a foolâs errand. Multiracial societies will inevitably be unequal societies, with all the disharmonies inequality entails.

After about 30 minutes covering the tripletsâ reunion, the media sensation, and their early life together, the documentary takes a dark turn, or actually two of them. The themes are entwined in the film, but it is best to review them separately.

Naturally, the triplets shared negative traits as well as positive ones. They all suffered from depression; at least two of them spent time in mental hospitals; and one of them, Eddie Galland, killed himself in 1995. All three boys had different experiences growing up in households with different sets of adopted parents and siblings. But apparently Eddie had been the most alienated.

The other dark theme is far more pronounced. Naturally, the adoptive parents wondered why the triplets were separated, so they went as a group to the Louise Wise Agency and were told by its directors that the boys were separated because it was hard to place a set of triplets. It seemed plausible enough.

But when Dr. Shafran returned to retrieve his umbrella, he saw the board uncorking a bottle of champagne and toasting, as if they had just dodged a bullet. The whole âGentlemen, hereâs to evilâ quality of the toast led the families to conclude that the agency was hiding something. So they contacted lawyers with the intent of getting to the truth.

But after initial interest, various New York law firms declined to represent them, citing conflicts of interest. It was claimed that associates at the firms were seeking to adopt children from the Louise Wise Agency. It seems plausible, given that we are talking about law firms in New York City. But it was not unreasonable to suspect that very powerful people might be engaged in a coverup. Eventually the families dropped the issue.

Then investigative reporter Lawrence Wright discovered that primarily in the 1960s, the Louise Wise Agency, working in tandem with the Jewish Board of Family and Childrenâs Services, had been engaged in a study of identical siblings, who were adopted into different home environments, then carefully observed over the years as they matured. The parents of the cildren agreed to this. They were told that it was a policy of the agency to study the development of the children, but they were not told that they had identical siblings. All told, five sets of identical twins in addition to the triplets were part of the study.

The study was overseen by two psychiatrists, Viola W. Bernard and Peter B. Neubauer. Neubauer seemed to be the principal psychiatrist. Only he is discussed in the documentary. Neubauer was an Austrian Jew who fled from the Nazis. Neubauer studied medicine in Vienna and Bern, emigrated to the US in 1941, and worked as a child psychiatrist. He was a Freudian and worked closely with Freudâs daughter Anna.

Judging from the documentary, everyone involved in the study was Jewish: Neubauer and his staff, the agencies that made it possible, the adopted children, and the adoptive families. Nevertheless, the experiment was likened to something done by the Nazis. Apparently, we are supposed to think that Dr. Neubauer was the Jewish Dr. Mengele, who also took an interest in identical siblings.

The children and their parents were of course scandalized. But it is really not clear if anything unethical took place. First of all, a crucial piece of information is lacking: was the policy of separating identical siblings and not telling the adoptive parents dictated by the study? Or did the policy already existâbecause it really was difficult to place sets of twins and tripletsâso that all Neubauer did was to collect data that would otherwise have gone unknown?

The latter seems far more likely, given that âseparated at birthâ stories are widespread, but the Neubauer study was apparently unique. I would, of course, argue that it is unethical to separate identical siblings. But given that it was an accepted practice at the time, was there anything unethical about collecting potentially valuable scientific data?

The strangest thing about the Neubauer study is that the findings were never published. Neubauer did publish a book, Natureâs Thumbprint: The New Genetics of Personality (Reading, Mass.: Addison Wesley, 1990), co-authored with Alexander Neubauer, which surely drew on his studies. But Neubauerâs research papers were presented to Yale University and placed under seal until 2065.

These papers surely do not record Mengele-like enormities. So why put them under lock and key? One of Neubauerâs assistants speculates that maybe people arenât ready to learn just how much of their lives and choices are controlled by heredity. This seems quite reasonable, but the massive literature on other identical siblings âseparated at birthâ already establishes that point quite well. (The assistant, by the way, is a colossal liberal. She herself is probably not ready to grapple with the political implications of refuting blank slatism, given that the blank slate ideology is the foundation of the modern Left.)

Neubauerâs sample size was not large, but as far as I know, nobody else followed the development of identical siblings in different environments from birth. So perhaps his studies reveal something profoundly disconcerting, something worth covering up. Interestingly enough, Neubauer had his subjects filmed, and one of the reasons this documentary is so striking is simply seeing the triplets on film. I think it is quite reasonable to think that something deeply discomfiting is being covered up.

Neubauer came from the Freudian school, and Freudian psychology has little place for heredity. But this would not really explain why Neubauer would cover up his findings, because if he were an orthodox Freudian, he never would have embarked upon the studies in the first place.

A similar coverup takes place at the end of Three Identical Strangers. For despite the massive evidence of hereditary determinism presented by the triplets, they and members of their own family are not comfortable with the idea that nature is so powerful. One family member claims that she thinks that nurture is powerful enough to overcome anything. They believe this, of course, because they want to believe that Eddie could have been saved from suicide.

Of course, different contingencies made a mark of the three boys. They grew up in different families. They married different women. One had appendicitis. One killed himself. But in a very real sense, they were the same person living three different lives, which diverged in countless ways. But if they had switched places, they probably would have reacted in pretty much the same ways to the contingencies that separated them. Today, one of the brothers is heavier than the other. They wear their thinning hair differently. But because they so bitterly regret Eddieâs suicide, they cling to the faith that if he had just been nurtured a bit differently, he would still be alive. They seem blame his death on his father, who was known as a disciplinarian. It strikes me as grotesque, but they might even be right. If Eddie were alive, chances are heâd think the very same thing.

I highly recommend Three Identical Strangers. It is an ideal way to introduce people to hereditary determinism and Genetic Similarity Theoryâas well as the motives that make people shy away from their ultimate political implications.