Twelve Monkeys (1995) is Terry Gilliamâs last great movie. It is a masterful work of dystopian science fiction, with a highly imaginative plot, a tight and literate script, fantastic steampunkish sets and props, and compelling performances from Bruce Willis, Brad Pitt, and Madeline Stowe. Gilliam is usually far too ironic and self-conscious to deliver emotionally satisfying work. But in Twelve Monkeys, we see stylistic elements and themes from earlier Gilliam filmsâTime Bandits, Brazil, The Adventures of Baron Munchausen, The Fisher Kingâapplied to much darker material with such virtuosity that it no longer seems labored and calculated. Nor does it smother real feeling.

Iâd like you to watch this film, so no major spoilers. Most of what I will say can be inferred from the trailer. In the back story of Twelve Monkeys, practically the whole human race was wiped out by a virus in 1997. The survivors live underground, in totalitarian lockdown, under a Permanent Emergency Code, ruled by a politburo of scientists, a whole committee of Dr. Strangeloves. 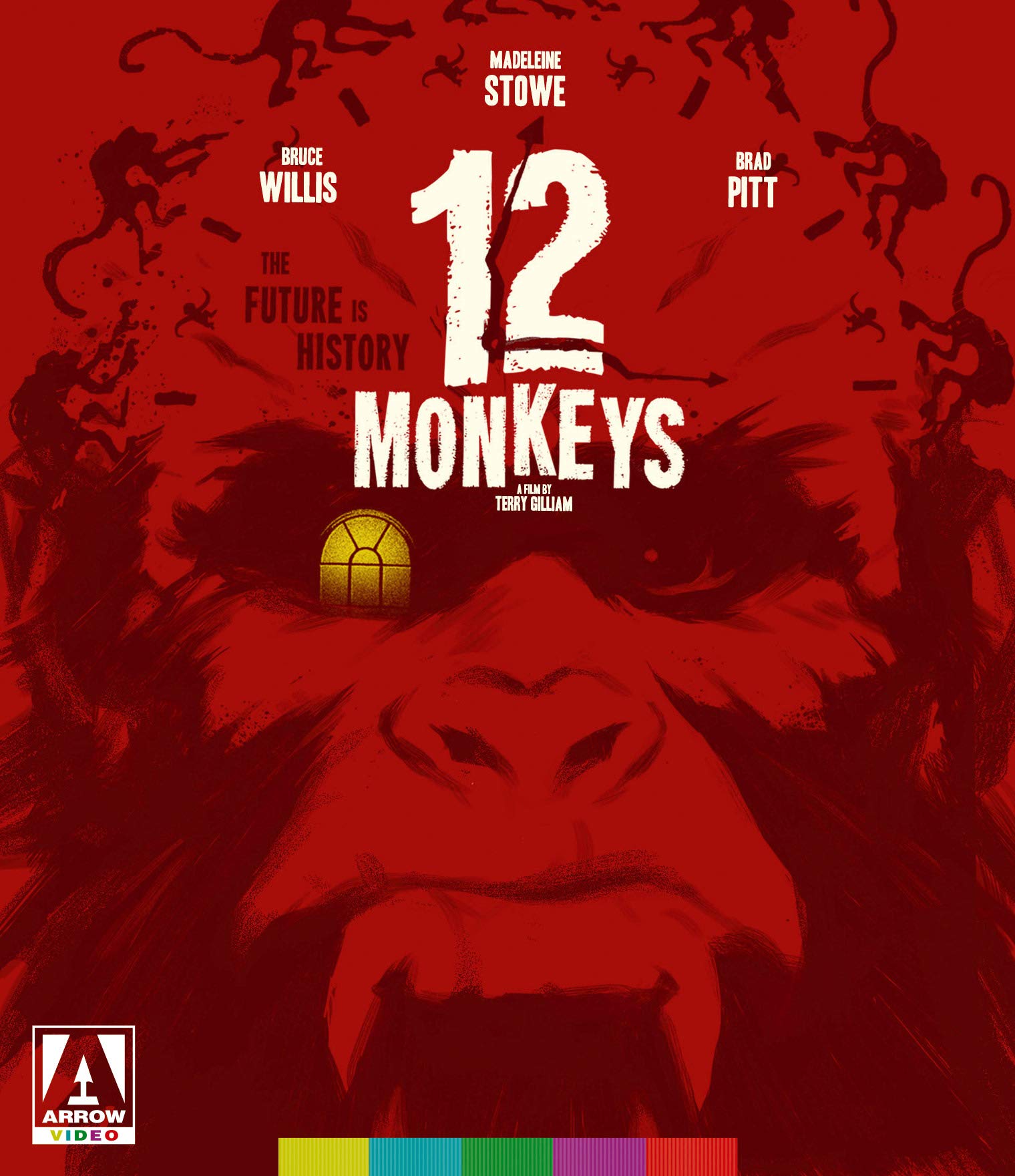 In 2035, the scientists somehow invent a way to travel back in time. They wish to send someone to the past, just before the outbreak of the plague, in order to . . . No, they donât want to prevent it. If the plague never happened, none of them would be ruling over the pitiful remnants of the human race. Instead, they simply want a pure sample of the virus, before it mutated. Their motives are never made clear. Is it for pure research? Would an earlier strain of the virus allow them to create a cure?

Bruce Willis plays James Cole, a prisoner, who has been pressured into âvolunteeringâ to be sent back in time. But the equipment is a little tricky, so he first ends up in Philadelphia in 1990âsix years too earlyâwhere he is arrested and confined to a mental institution, because thatâs what one does with people who claim to have come from the future to prevent the human race from dying in a pandemic.

Cole meets a sympathetic psychiatrist, Dr. Kathryn Railly (Madeline Stowe), and a mental patient Jeffrey Goines (Brad Pitt), who is a radical environmentalist and animal rights advocate. Cole tries to escape to complete his mission, but he is captured and locked in a cell, from which he mysteriously disappears. Apparently, the scientists have put implants in his molars that allow them to pull him back into the future, where he is debriefed and then returned to the past, first ending up in the trenches of WWI, where he is shot in the leg, then finally ending up in 1996.

Six years after her encounter with Cole, Dr. Railly has published a book on the âCassandra complexâ: people like Cole who warn society of impending disasters but are not heeded. After Railly gives a lecture on her book and signs copies, Cole kidnaps her. He needs her help. He now believes that the virus will be released by Jeffrey Goines and a radical environmentalist group called the Army of the Twelve Monkeys. Cole is afraid that during their time in the mental hospital, he actually gave Goines the idea of wiping out the human race with a plague. (If you are going to construct stories around time travel, you might as well milk it for every paradox.)

Railly, of course, is terrified. But she does not go to pieces. Sheâs a doctor. She tries to understand Cole and convince him to let her go as he drags her through his quest for the origin of the virus. Philadelphia in 1996 turns out to be almost as dystopian as Philadelphia in 2035. After some harrowing misadventures, with Railly, Cole is pulled back into the future.

When the two are apart, a delightful role reversal takes place. Railly comes to believe Cole is not a madman. He really is from the future. Cole, however, comes to think that heâs actually mad. He does hear a mysterious voice that is never explained. The scientists also, frankly, act a bit crazy. And really, doesnât the whole story sound a bit insane?

When Cole is returned to the past, he seeks out Railly because he wants her to cure him, only to discover that she has taken up his mission with the manic intensity of a true believer. You laugh when you see it, but the real delight comes in retrospect, when you see that it was completely inevitable.

After Cole and Railly get back on the same page, they go after the Army of the Twelve Monkeys, only to find . . . Well, Iâm not going to say any more about the plot, save that there are many more twists and turns for you to enjoy.

Twelve Monkeys isnât a âdeepâ film. It doesnât invite us to ponder philosophical or theological issues. It doesnât seem to be an allegory for anything else. It doesnât need to be. The world it creates and the story it tells are highly satisfying in themselves: by turns surreal, terrifying, funny, and moving.

The lead performances are remarkable. Bruce Willis is compelling as a man who is heroic despite all his doubts, fears, and failings. Brad Pitt is charismatic and hilarious as Jeffrey Goines. But Madeline Stowe steals the film. She is not only beautiful, but she is highly intelligent, so she is completely convincing as a psychiatrist.

Twelve Monkeys is not just intellectually stimulating and emotionally compelling, it is also visually striking from start to finish, with imaginative sets, beautifully constructed shots, and a gauzy glamor that bring to mind Hitchcock. (One of the settings is a Hitchcock film festival.)

Twelve Monkeys is set within a materialistic, scifi universe, but what you see is almost never what you get, because madness and false memories can systematically estrange us from reality. Gilliam methodically mirrors events in the âreal worldâ with movies, television shows, and commercials, placing us all in the world experienced by madmen, who see portents, intelligible patterns, and hidden intentions where sane people see only chaos and coincidence.

In fact, I canât think of a single false note in the entire film, not even the music. Given this filmâs cinematic forebearers and touchstones, I was not expecting Paul Buckmasterâs score, which riffs off Astor Piazzoliaâs Argentine tango music. But it works.

Even though Twelve Monkeys was released in 1995, it seems quite topical in the age of Corona Chan. So if you are looking for some more lockdown viewing, I highly recommend it. It is a depressing vision of the future, but it will make you feel lucky. James Cole had a lot more to complain about than we do, and he bore it far more admirably.