David Wnendtâs 2015 film Look Whoâs Back (Er ist wieder da) is based on Timur Vermesâ 2012 novel of the same name about Adolf Hitler being mysteriously transported to modern Berlin and becoming a viral media sensation. Look Whoâs Back is a fascinating and funny film, but its intended message is hard to fathom. Is the movie a satire of modern society, a satire of the modern media, a warning against recrudescent fascism? If it is entirely satire, it is too broad and all-encompassing so that one does not know where the filmmaker stands, and for what. As I read it, however, the net effect of this film is to make Hitler seem like a much more rational and compelling figure than the carpet-chewing madman to which we are accustomed. This, in turn, undermines the filmâs attempt to smear National Populists like Marine Le Pen and Geet Wilders by linking them to Hitler. But surely this was no part of the Wnendtâs or Vermesâ intentions.

Look Whoâs Back strikes me as a strange mashup of Jerzy Kosinskiâs only good story, Being Thereâin which a mysterious cipher rides other peopleâs projections into a position of powerâand Network, Paddy Chayevskyâs brilliant satire of television, in which an ambitious and unscrupulous female producer exploits Howard Beale, a TV-anchor turned mad prophet and tribune of populist rage. Only in this case, the cipher is invisible not because he is unknown but because he is overexposed, supposedly dead, and people refuse to believe their lying eyes. 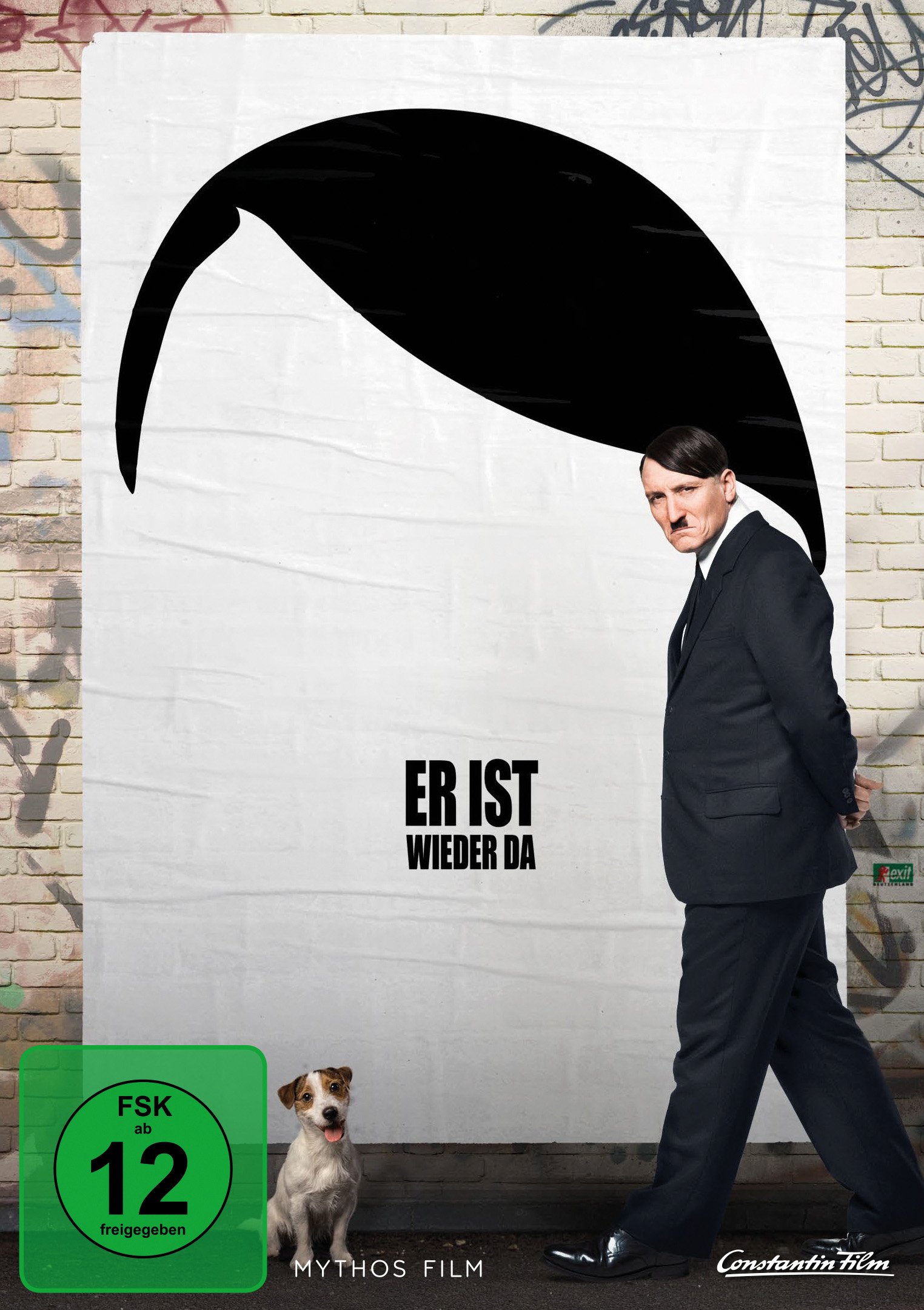 The basic story of Look Whoâs Back is quite simple. Through some miracle, Adolf Hitler (Oliver Masucci) has been transported from April 1945 to 2014. He wakes up in a Berlin apartment complex near the site of the old Chancellery. He then has the sort of comic misadventures one would expect of a guy dressed as Hitler wandering around present-day Berlin. Naturally, nobody thinks he has come back. Instead, they take him to be Hitler impersonator, i.e., a madman or a clown. People want to take selfies with him and do the Hitler salute. Parts of the film are presented as unscripted interactions with real people. If this is true, it seems remarkable how few negative reactions he receives. Frankly, I think it is all fake.

Hitler befriends a newsstand owner and begins to catch up on the last 70 years. He is horrified to learn that Poland still exists, and on German territory no less. Hitler regards Angela Merkel with contempt and regards her party as a pale imitation of National Socialism. But he puts a great deal of stock in the Greens.

Hitler then teams up with Fabian Sawatski (Fabian Busch) who is a bit of a loser, living with his mom and dreaming of being a director while relegated to delivering mail and making coffee at the offices of the MyTV network. Fabian is convinced that this Hitler impersonator will be a huge success and wants to come along for the ride. Criss-crossing Germany, Hitler talks to ordinary Germans about the evils of immigration and race-mixing and the sham of liberal democracy. He finds many receptive listeners. Again: Is this for real or just a morality play? Is it a warning that even the slightest deviation from the liberal democratic consensus will lead straight to You Know Who?

If this is the intended message, then why does the filmmaker portray Hitler as level-headed, reasonable, and even humorous? Why not just use the ranting TV Hitler we have seen a thousand times before? Vermes and Wnendt know that this image of Hitler was constructed by extracting the impassioned climaxes from what were often long lectures filled with facts and arguments. Vermes, by the way, is quite masterful at capturing Hitlerâs voice and style, as ably discussed by Counter-Currentsâ own James OâMeara, and this is carried over into the film with hilarious effect even when Hitler encounters such minor modern oddities as a granola bar.

Hitler hits the big time when Katja Bellini (Katja Riemann) takes over MyTV. She thinks Hitler will be sensational, but her resentful underling, Christoph Sensenbrink (Christoph Maria Herbst) thinks he can oust her by engineering a public backlash against putting Hitler on a TV satire show. Sensenbrink urges the writers to come up with the most offensive jokes possible. (Example: Q: What did the Jewish pedophile say? A: Want to buy some candy?)

But Hitlerâs monologues are not the rantings of a genocidal madman. Nor are they comedy routines, although they have a biting wit. Instead, they are candid and heartfelt meditations on the banality of modern culture, the failure of liberal democracy, and the need for meaning in life. Hitler becomes a viral media sensation.

But then footage of Hitler shooting a small dog that attacked him comes to light. The whole thing strikes me as deeply fake, as Hitler was a dog lover. But it is used to great effect. The audience turns on him. Hitler is kaput. Bellini and Sawatski are aus. Sensenbrink takes Belliniâs job.

But then . . . Hitler comes back. Hitler is, after all, a best-selling author. So Hitler holes up at Sawatskiâs momâs apartment and writes his second bestseller, Look Whoâs Back. In a hilarious satire of the modern image makeover, Hitler donates money to animal charities, appears on talk shows, and even manages to get beaten up by skinheads.

Meanwhile, the networkâs profits plummet without Hitler, which sets up a scene in which Sensenbrink does a parody of Hitlerâs famous Downfall tirade. (It is notable that the only ranting in the movie is not Hitlerâs but Sensenbrinkâs.) One of the idiots at the network suggests hiring Hitler back, because âNobody can stay mad at Hitler forever.â Surely Jews would disagree.

Which brings us to another aspect of this film that strikes me as deeply fake: Jews are mentioned from time to time, but always in ways that make them seem like they are essentially powerless, in need of protection, and readily dismissed when they start going on about the dangers of resurgent Hitlerism. Bellini wants Hitlerâs assurance that Jews will not be mocked, but Hitler takes her to mean that Jews are âno laughing matter.â A protest from Jewish organization is laughed off. When an elderly Jewish woman recognizes Hitler really is Hitler, it is dismissed as dementia.

This strikes me as deeply dishonest. A huge amount of modern politics in the West consists of placating âdeeply concernedâ Jews, even when they are transparently neurotic and manipulative. For instance, steps had to be taken lest space aliens be triggered into anti-Semitic pogroms when it was discovered that trees in Germany and buildings in America look like swastikas from above.

The film ends with Hitler, Sawatski, and Bellini making a movie of Look Whoâs Back. The worst-case scenario of someone realizing that Hitler is actually, you know, Hitler, is acted out in the movie and disposed of with a diagnosis of mental illness. The movie completed, Hitler and Bellini ride through the streets of Berlin in an open limousine while Hitler monologues on the rise of nationalism, populism, and xenophobia around Europe to a montage of images of demonstrations and politicians like Marine Le Pen and Geert Wilders. This, he claims, is an ideal environment for him to come back.

We are supposed to feel chills, but I felt rather angry at the attempt to stigmatize sensible European nationalism and populism by equating it with Hitler. Want borders? Youâre no better than Hitler! Want standards? What is this, Nazi Germany? Of course, America was not Nazi Germany before 1965, when we opened our borders; or before the cultural revolutions of the 1960s which declared war against all reigning norms and values.

Look Whoâs Back is a highly entertaining film, but it is deeply fake. The premise that Adolf Hitler could return to modern Germany, become a TV star, and then perhaps return to politics is meant as an insult to the German people. But surely there is no shortage of people in Germany who would scramble to engage in sadism and self-righteousness cloaked in the banner of anti-fascism if Hitler returned.

I suspect the truth would be closer to what we have been going through in America over the last few years when a real-life TV star became President. Donald Trump is no Hitler, but a large portion of the US population has gaslighted themselves into thinking Trump is Hitlerâs second coming and reacted accordingly. And Trump Derangement Syndrome is the merest shadow of the oy veying that would rend the very fabric of the universe if Hitler actually did come back.

Nevertheless, I highly recommend Look Whoâs Back. Oliver Masucci is a compelling Hitler, although they should have given him blue contact lenses. Katja Riemann is simply regal. Indeed, the entire cast is good.

Again, it is hard to determine the filmâs actual message. But liberals find it deeply disturbing, and Right-leaning individuals who are supposed to be scared away from National Populism by an association with Hitler might have exactly the opposite reaction. I have never believed that the triumph of National Populismâwhich is based upon universal, objective reality, not mere historical contingenciesârequires the rehabilitation of Hitler, but taking some of the sting out of the reductio ad Hitlerum canât hurt either. Try showing this film to normies and see how they react. The Northman: Our Roots, Evils and All
Gregory Hood
• 182 Comments • Reply
← âDeath My Bride"The Mandalorian →
Hide 19 CommentsLeave a Comment
"Look Who's Back"
• 19 Comments
Commenters to Ignore
Commenters to ignore (one per line)