In 2010, Christopher Nolan released Inception, one of the greatest science fiction films of all time. It is stunningly artful and imaginative, as well as dramatically gripping and emotionally powerful. (See my review here). Then, four years later, Nolan released Interstellar, which is almost as good. It may seem silly not to want to âspoilâ a film that has been out for six years, but if you havenât seen it, I want you to see it. Thus I am going to talk about the basic story and themes while skirting large chunks of the plot.

Interstellar is set sometime late in the late 21st century. Global technological civilization has undergone a collapse. There has been war, famine, and technological regression. And it is only getting worse, because some sort of blight is destroying plant life all over the globe. Those who do not starve will suffocate as the blight destroys the oxygen supply.

But the ultimate end is a closely guarded secret. Official policy in what remains of the United States is that things will get better, but the current generation are caretakers. They need to hold on, produce food, and have children to repopulate the earth. School textbooks teach that the moon landing was a hoax, while NASA works in secret on a way to perpetuate the human species on other planets. Plan A is to save the people on Earth by finding them a new home. Plan B is to send human embryos to a new world.

Nearly fifty years before the events of the film, a wormhole appeared near Saturn giving mankind a path to a new galaxy. NASA managed to locate twelve potentially habitable worlds. Ten years before the film present, they dispatched scientists to those worlds. They called them the Lazarus missions. Most of the scientists were never heard from again. But some promising data came back. Now they need to send a follow-up mission, which will be headed by Joseph Cooper (Matthew McConaughey).

Three planets show the most promise, named for the scientists who were sent to them: Miller, Mann, and Edmunds.

Millerâs planet is near a black hole. It is covered with shallow water, but the gravitational forces create mile high waves that relentlessly sweep its surface. There is no life. Because of its proximity to the black hole, time passes at different rates on the planet in orbit above it. The landing team is gone only three hours, but for the rest of the universe, 23 years have passed. The scientist who remained on the ship has grown old and the families of the landing party have, of course, changed dramatically. The children they left behind have become adults and have had children of their own, while people in their parentsâ generation have died. The whole sequence is enormously imaginative and deeply moving.

The next planet was explored by Dr. Mann (Matt Damon), who claimed that it was habitable. We never see the surface of the planet, because Dr. Mann has made his base on a cloud. The planet is surrounded by layers of frozen, solid clouds, which is again highly imaginative and surprising. Mannâs world is not, however, habitable. Dr. Mann has gone mad in his solitude. He sent back false data simply because he wanted people to rescue him. He was willing to risk the future of the whole human race out of sheer selfishness.

After being sucked into the black hole, Cooper is deposited back our solar system, near Saturn. He discovers that in the last half century, humanity has built an armada of vast space ships that will eventually pass through the wormhole to Edmundsâ planet, which will be humanityâs new home.

In an incredibly moving final sequence, Cooper meets Murphy, the ten-year-old daughter he left behind, now an aged woman surrounded by her vast brood of children and grandchildren. As a child, Murphy begged her father to stay and resented him for years after his departure. But she is at peace, because he helped save her and the entire human race. She tells him that he should not stay around and watch his own child die. He needs to go back out there, to Edmundsâ planet, where Dr. Amelia Brand (Anne Hathaway) is waiting in hibernation; he needs to find her, awaken her, and help prepare humanityâs new home.

Interstellar, like all of Nolanâs movies, is a deeply serious work. There are four themes that are especially poignant.

The first is the tension between rootedness and exploration. The world of Interstellar has officially given up on space exploration. They are pledged to be caretakers on a planet that is becoming uninhabitable. Their political and educational system is dedicated to constricting peopleâs horizons. Caretakers live within their limits. Explorers go beyond and set new limits. Cooper used to be a NASA pilot, but now he is a farmer, and he hates it. He wants to be among the stars, not scraping a living from the dirt. As Interstellar shows, however, on a dying Earth, one canât be a caretaker unless one is an explorer. To survive, one must aim at more than survival. But, then again, the ultimate goal is a new place to put down roots.

The second theme is the difficulty of saying goodbye, especially when Cooper leaves his children behind on a mission from which he may never return. A great deal of Interstellarâs emotional power derives from the pain of separation, exacerbated by the time differentials. (One of the best traits of James Grayâs Ad Astra was its meditation on what traits of character and beliefs would be necessary to sustain such explorers. See my review here.)

The third important theme is the role of lies in society. The school system teaches that the Moon landing was a hoax, but it funds NASA in secret. The ultimate fate of the Earth is top secret. Amelia Brandâs father, Professor Brand (played by Michael Caine), claims to be working on Plan A, but has concealed the fact that he has failed to solve the âgravity problemâ that will allow mankind to leave the Earth en masse. He lied to give people hope. The robots have an honesty setting, because it is understood that perfect honesty dissolves society. This a theme in The Dark Knight Trilogy as well. 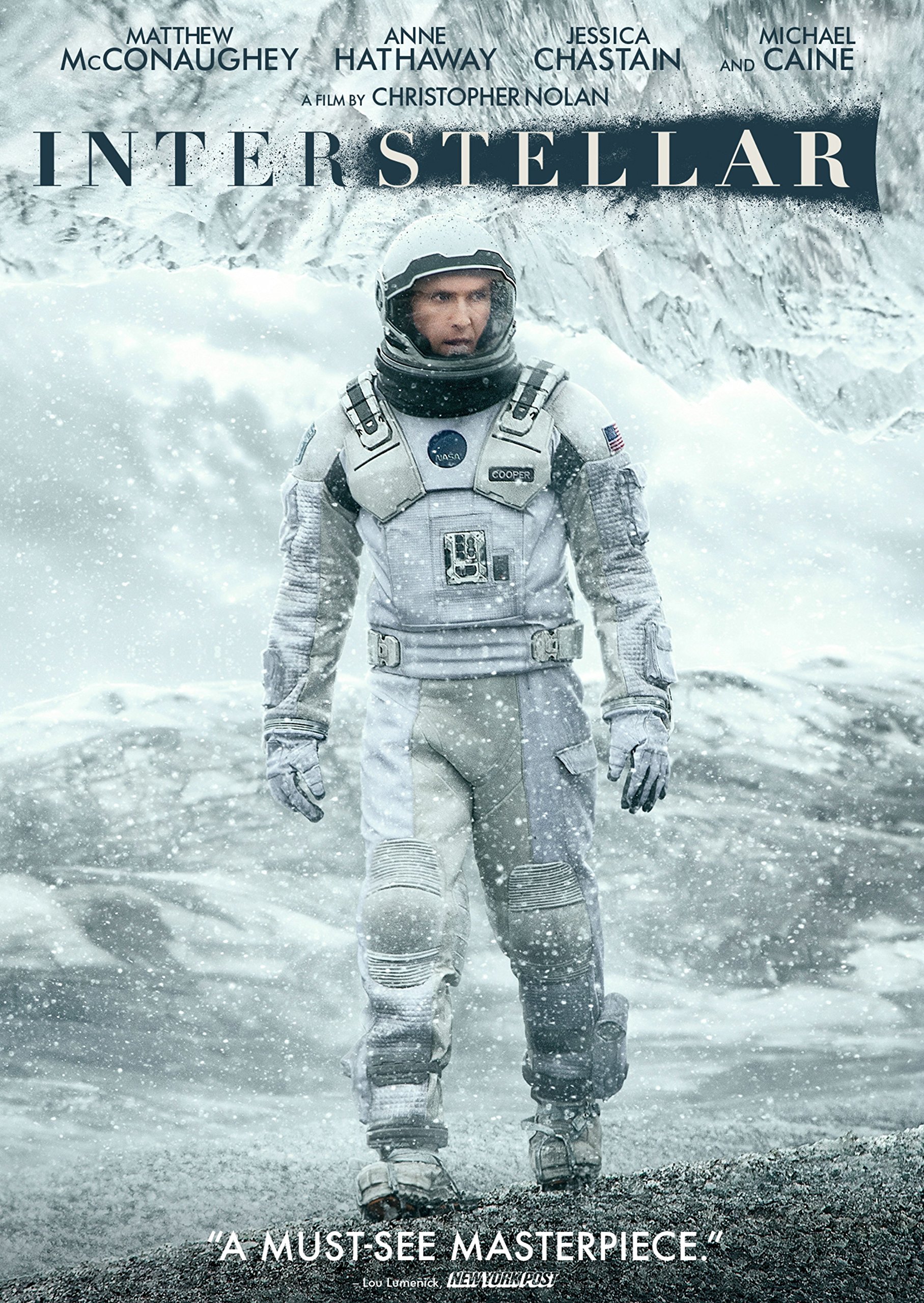 Finally, Interstellar is about racial survival, which is a particularly poignant issue for whites, since we are on the path to extinction. When faced with extinction, the feminist idea that having a career grants higher status than motherhood is quietly forgotten. Plan B presupposes that women will bear enough children to make exponential growth possible. And although Cooperâs daughter Murphy plays a very important role in saving all of humanity, she also has a large family surrounding her at the end of her life. (The adult Murphy is played by Jessica Chastain. The aged Murphy is played by Ellen Burstyn.)

Interstellar is not flawless. For some reason, McConaughey insists on speaking with a twangy, mush-mouthed accent that none of his other family use, so it just seems fake. Time travel and an almost literal deus ex machina also play important roles, which I found annoying. I have no scientific quibbles because this is science fiction, so the jargon only has to sound good. And it does.

But the virtues of this film are immense. The story is gripping, the script brilliant, and the acting is uniformly excellent. This is my favorite McConaughey role. Michael Caine, Matt Damon, Jessica Chastain, and Ellen Burstyn are all outstanding. The sets, equipment, and special effects are also quite dazzling.

Special mention is due Hans Zimmer. Frankly, I am not a fan, but this is his best score. To my ears, it sounds like the took the organ pedal from the opening fanfare of Richard Straussâs Also Sprach Zarathustra and turned it into a minimalistic but often emotionally shattering accompaniment.

Iâve said quite a lot about this movie, but I guarantee that if you watch it for the first time, it will still be filled with surprises. In a time of social distancing and immense anxiety over the coronavirus pandemic, Interstellar is the best kind of escape: imaginative, enthralling, inspiring, and cathartic.