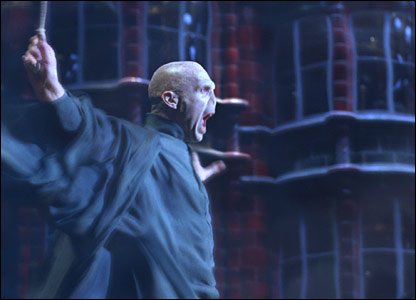 It is a word that was once buried, yet rises from the grave with increasing rapidity to haunt all ears who hear the two-syllable pejorative uttered. Uttered frequently by Black people in casual conversation though scrubbed completely from white peopleâs vocabulary, this one word holds more power than Little Boy or Fat Man, capable of destruction beyond words.If you have seen or read Harry Potter you are aware that Lord Voldemort is simply known as âHe-Who-Must-Not-Be-Namedâ for the following reason:

He-Who-Must-Not-Be-Named:Rowling got the idea for this from two 1950s London gangsters called the Kray Twins. “The story goes that people didnât speak the name Kray. You just didnât mention it. You didnât talk about them, because retribution was so brutal and bloody. I think this is an impressive demonstration of strength, that you can convince someone not to use your name. Impressive in the sense that demonstrates how deep the level of fear is that you can inspire. Itâs not something to be admired.” (TLC).

As soon as Voldemort took control of the Ministry in 1997, he reinforced this fear by putting a taboo on speaking his name. Anyone brave enough to say ‘Voldemort’ would have their locations immediately revealed to “snatchers” or other enforcement squads who would come and take you into custody (DH).

The word that was ceremoniously buried and is deemed an offense worthy of prosecution in New York City if uttered elicits a greater level of fear in the real world then the fictional Voldemortâs name conjured in the world inhabited by wizards and witches.White people cringe when they hear this word spoken aloud, frantically searching around them to ensure that no Black person was in ear shot. When they see this word in print, that same fear washes over them and a sense of trepidation follows knowing that reading âThe-Word-That-Must-Not-Be-Namedâ is the modern-day equivalent of sneaking looks at your dads Playboy. People have been conditioned to cower in panic at the word, even phrases that sound similar yet have no racial connotations, such as the word âniggardlyâ and this hysteria has now seeped into other terms such as âblack holeâ, âblack iceâ or other variations of using the âblackâ to denote negativity.The taboo surrounding âThe-Word-That-Must-Not-Be-Namedâ is firmly in place and remonstrations against the vernacular noose that goes around the neck of the white person daring to utter it are exceedingly rare.As in Harry Potter, few brave souls have the courage to stand up to Lord Voldemort and in Black Run America (BRA) few souls can be found who understand the rhetorical battle that has been won and the significance of what the fear surrounding âThe-Word-That-Must-Not-Be-Namedâ means.White people have capitulated to the power of BRA, and the one word that forever coerces this surrender is the power over âThe-Word-That-Must-Not-Be-Namedâ and efforts must be made to remove every reference to this word from the annals of history:

A classic turn-of-the-century English novelist whose works have been read by countless millions of people is having his work sanitized for a new generation of readers.

Joseph Conrad, whose “Heart of Darkness” and “Lord Jim” have been scrutinized by English students on multiple continents for decades, wrote a lesser known novel in 1897 called “The Nigger of the Narcissus.”

Now, in what critics are calling a blatant act of politically correct censorship, a Netherlands-based publisher has reprinted the novel under a new name: “The N-word of the Narcissus.”

The new version is the first installment of WordBridge Publishing’s classic texts series, featuring “texts with a message for moderns, made accessible to moderns.”

But some critics say updating a Conrad novel by replacing all mentions of the offensive term “nigger” with “n-word” is just as offensive as the word itself.

“It’s outrageous,” said Niger Innis, spokesman for the Congress of Racial Equality, a New York-based civil rights organization. “Are they going to go to Mark Twain as well and take out all of those references?

One should never underestimate the enabling powers of Disingenuous White Liberals (DWLs) and yes, they did in fact go after Mark Twain:

What is a word worth? According to Publishers Weekly, NewSouth Books’ upcoming edition of Mark Twain’s seminal novel “Adventures of Huckleberry Finn” will remove all instances of the N-word — I’ll give you a hint, it’s not nonesuch — present in the text and replace it with slave.

Race matters in these books,” Gribben told PW. “It’s a matter of how you express that in the 21st century.”

Unsurprisingly, there are already those who are yelling “Censorship!” as well as others with thesauruses yelling “Bowdlerization!” and”Comstockery!”

Their position is understandable: Twain’s book has been one of the most often misunderstood novels of all time, continuously being accused of perpetuating the prejudiced attitudes it is criticizing, and it’s a little disheartening to see a cave-in to those who would ban a book simply because it requires context.

On the other hand, if this puts the book into the hands of kids who would not otherwise be allowed to read it due to forces beyond their control (overprotective parents and the school boards they frighten), then maybe we shouldn’t be so quick to judge.

It’s unfortunate, but is it really any more catastrophic than a TBS-friendly re-edit of “The Godfather,” you down-and-dirty melon farmer.

Just like in Harry Potter, where anyone standing up to Voldemort will be instantly crushed, those who dare use âThe-Word-That-Must-Not-Be-Namedâ will find a fate just as severe as what awaits a Muggle , witch or wizard in the world of J.K Rowling:

A federal jury will be asked to decide whether it is acceptable for an African American person, but not a white person, to use the “n” word in a workplace.

U.S. District Judge R. Barclay Surrick has ruled that former Fox29 reporter-anchor Tom Burlington’s lawsuit against the station, claiming a double standard and alleging that he was the victim of racial discrimination, may go to trial. However, Surrick denied Burlington’s claim of a hostile work environment.

Burlington, who is white, was fired after using the “n” word during a June 2007 staff meeting at which reporters and producers were discussing reporter Robin Taylor’s story about the symbolic burial of the word by the Philadelphia Youth Council of the NAACP.

Burlington, who began work at the station in 2004 and is now working as a real estate agent, was suspended within days and fired after an account of the incident was published in the Philadelphia Daily News. He alleges that he “was discriminated against because of his race,” according to court documents. He claims in his lawsuit that at least two African American employees at Fox29 had used the word in the workplace and were not disciplined.

The dispute began after Taylor, who is white, used the phrase the “n” word during the 2007 staff meeting. She said participants at the burial had said the full word “at least a hundred times or more,” according to court records.

“Does this mean we can finally say the word n-?” Burlington asked colleagues, according to depositions.

Nicole Wolfe, a producer and one of the three African American employees among the nine people at the meeting, exclaimed: “I can’t believe you just said that!”

We at SBPDL have long looked at âThe-Word-That-Must-Not-Be-Namedâ with curiosity, knowing full well the power the word has, yet feeling uncomfortable letting it escape our lips.

No more. Defiance to BRA means âThe-Word-That-Must-Not-Be-Namedâ must be shouted aloud and one day, people will be mandated to say it 100 times over or for as long as it takes to forever remove the sting that the word holds.

A toleration of the continued censorship of âThe-Word-That-Must-Not-Be-Namedâ means the continued existence of a world where men and women possessing the grace and stature of those who frequent The Nightly News or Thug Report will be continually celebrated.

You canât bury the past, just as you canât bury a word. Attempts make the past more palatable to the current zeitgeist only show the fear in the hearts and minds of those who pull BRAâs levers. Those who can see grow in number, with each passing event like the Mayfair Mall incident showed.No act of defiance in BRA is greeted with such exacting repercussions as what awaits the person who dares utter âThe-Word-That-Must-Not-Be-Namedâ and expunging historical documents, fictional works and movies of such references to it forever ensures BRAâs hegemony over white people.

Race and Crime in America
The unspoken statistical reality of urban crime over the last quarter century.
Ron Unz
• 204 Comments • Reply
← #65. A Bad ManicureHow a DWL Views the World of Crime: Mod... →
Hide 28 CommentsLeave a Comment
""the-Word-That-Must-Not-be-Namedâ: Huck Finn, Joseph Conrad and the Dreaded N-word"
• 28 Comments
Commenters to Ignore
Commenters to ignore (one per line)

Save ListCancel
Endorsed Only
Trim Comments?
← #65. A Bad ManicureHow a DWL Views the World of Crime: Mod... →
Current Commenter
says:
Current Date at Time Now
Leave a Reply - Comments on articles more than two weeks old will be judged much more strictly on quality and tone
Cancel Reply