One of the most chilling stories I’ve ever read published is the following:

In search of even more money, they finally arrived at the unlocked Blackburn residence, withAmanda, then 12 weeks pregnant, and her 15-month-old son inside.Authorities say Taylor hit Blackburnwith his gunand stayed at the housewhilethe other two drove off to retrieve money from an ATM using her card. 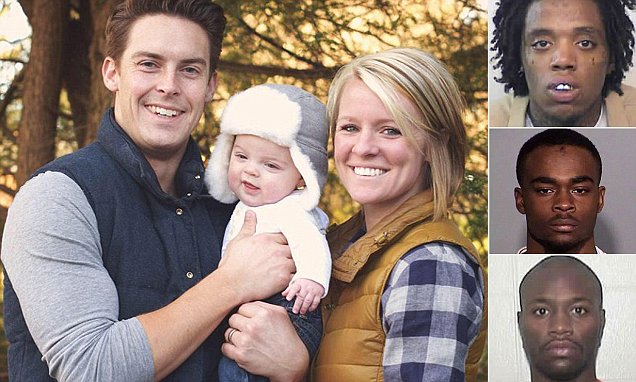 Amanda Blackburn, murdered by the three black males on the right

âTaylor stated that she charged at him and he shot her somewhere in the upper body so he would not be scratched,â the document states. âTaylor then told them that he leaned over her body and shot her in the back of the head. He leaned further, looked at her face, and watched her bleed.â [Suspected killer of pastorâs wife âwatched her bleed,â court document says, Washington Post, November 23, 2015]

She’s back in the news, courtesy of her surviving husbands testimony where he not only forgives the three black murderers of his wife and unborn child, but stresses he hopes he can bring them to Jesus “as a kick in the nuts… for the enemy.”[Davey Blackburn: Forgiveness is a decision: Pastor says he makes decision every day, The Indy Channel, April 24, 2016]:

Davey Blackburn says he’s decided to forgive the men who killed his wife.

Amanda Blackburn was killed in her northwest side home on Nov. 10, 2015, while her young son Weston sat just feet away in another room.

Before she was killed, police say she was beaten and sexually assaulted. She was pregnant with her second child at the time of her death.

In an interview with his former pastor on Sunday at the NewSpring Church in Anderson, South Carolina, Davey Blackburn said he had made the decision to forgive Taylor, Watson and Gordon.

“What I realized was that forgiveness isn’t an emotion. I wasn’t ever going to feel like forgiving them. Just point blank: You’re never going to feel like forgiving someone for doing something to you that’s irreparable,” Blackburn said. “What I realized is that forgiveness is a decision. And it’s not just a one-time decision. It’s a daily decision. I have to wake up and I have to decide to forgive. And here’s why I decided to decide to forgive. It’s because bitterness and unforgiveness is going to be a cancer to no one else except for me. And it’s going to eat me up inside if I hold on to that.”

He also said he hopes he can share his faith with the men.

“I really hope I get the opportunity to share the Gospel with these guys,” Blackburn said. “Imagine if these three guys met Jesus. Imagine the kick in the nuts that would be for the enemy.”

What type of sick world do we live in? I imagine a world where the three black males who sexually assaulted and murdered Amanda (and the child she carried) are publicly hanged next to the editors of the Indy Star , as a reminder of what happens to criminals and those who work 24/7 to protect criminality.

Davey: you can share the gospel all you want with the three black males who sexually assaulted and murdered your wife and the child she carried, but you can never take back the fact that your wife and unborn met the African culture Jim Crow was designed to protect white people from. [Why Davey Blackburn opted to forgive Amanda Blackburn’s killers, Indy Star, April 24, 2016]:

Recently, Davey Blackburn returned to the home where his wife was killed, he wrote in a blog post. He wrote that he reluctantly walked back into the room where he found her.

âThe morning I returned, I put worship music in my earbuds, laid down in the spot I found her, wept, prayed and worshipped,â he wrote.

Davey Blackburn and his son Weston now live with friends, he wrote in his blog. A question he gets all the time: How is Weston doing?

âHow is Weston going to grow up without his mom? Every time this thought came to my mind it was a like a dagger was being driven deeper into my stomach,â Davey Blackburn wrote.

But he wrote that his son is doing okay. He attributes that to a network of support from family and friends, and Westonâs age. At 15 months when his mother died, Davey Blackburn wrote Weston was not old enough to absorb the tragedy.

Noble, the pastor of New Spring Church, asked Davey Blackburn on Sunday: âHave you forgiven the men that killed Amanda?â

âAt the very beginning, when they had not been arrested, it was probably a little bit easier because they were faceless people. I had no idea who these guys were,â Davey Blackburn said. âThe first time I felt any kind of anger was when they arrested them, and I saw photos.â

He said he wrestled with the idea, eventually concluding that forgiveness is not an emotion.

âI wasnât ever going to feel like forgiving them,â he said.

Still, he said he decided to do it.

âBecause bitterness and unforgiveness is going to be a cancer for no one else besides me,â he said.

Bitterness and unforgiveness are not cancers, Davey; the cancer in America is the population that birthed the three males who sexually assaulted and murdered your wife and unborn child. It’s the cancer the editors/writers at the Indy Star go out of their way to excuse any and all dysfunction from this community and blame it on white people for discrimination, white privilege, or the legacy of slavery.

There is something very sick and degenerate about modern Christianity, with Davey’s strange theology standing out as a metaphor for why America is irredeemable.

Celestial reinforcements aren’t coming to save us or you, Davey.