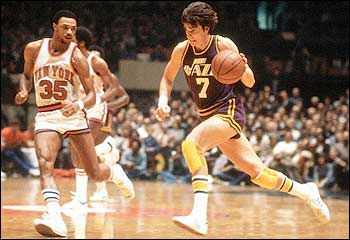 The NBA needs great white hopes, but that means Black players must pass them the ball

NBA All-Star Weekend is upon us again (and one does hope it won’t be a repeat of the 2007 All-Star Weekend in Las Vegas) and, finally, it has earned a worthy name – The Black Thanksgiving – that accurately nails the vibe surrounding the event:

So, you want to know about Black Thanksgiving?

First of all, what you need to know about Wilbon, whom I love, is that he has been known to exaggerate just a touch on occasion. But on this one, he’s on point.

But for most of the people who descend into town — this year it’s Los Angeles, with its still sparkling Staples Center and the surrounding “L.A. Live” area — it’s an opportunity to go wild (sometimes a little too wild, as happened in Las Vegas a few years ago) and get together.

Other folks have Tweetups. Black people have All-Star Weekend, or ASW. It’s a national holiday, sort of.

ASW is the only time of the year that people call me. I don’t say that to be maudlin, ’cause most of the time, I don’t want people to call me. (Dirty little secret: I don’t really like talking on the phone.) But they come out of the woodwork this time of year, because NBA players are royalty in Black America, and everyone wants to be near them. The old saying is that ballers want to be rappers, and rappers want to be ballers. That’s really, really true.

Basketball is a culture. It isn’t for everyone, though the game is loved by people of all colors. There is a rhythm to it, just as if McCoy Tyner was dribbling a ball instead of playing piano.

“Considering that the culture of basketball in a predominantly black league like the NBA is so strongly connected to African American culture, the NBA All-Star weekend has turned into a celebration of African American culture by extension,” says Todd Boyd, professor of critical studies at the University of Southern California School of Cinematic Arts.

Bill Simmons in his Big Book of Basketballcalled the sport a “Black game” and wrote fawningly over the athletes who have played in a sport just a hair’s breadth of legitimacy above professional wrestling. The NBA has become a “Black game” with the people charged with making the rules of the game deciding to favor an individual aspect over any team aspect of the sport (The same, by the way, in the NFL, with rule changes favoring speedier receivers and tiny corners).

Our friend Richard Lapchick – who always criticizes sports for a lack of the right kind (that’s the Black kind) of diversity – loves the NBA and gives it an “A” rating for diversity, though the league is 80 percent Black. He does attack, however, NCAA basketball for having Black players that earn such anemic grades compared to the white players who earn their grades and degrees.

Since the majority of NBA players lack the intelligence to last more than, at most, two semesters of college, the moniker “Black Thanksgiving” makes perfect sense. It makes perfect sense because of the utter thugnicity surrounding the NBA has reached levels that only World Star Hip-Hop can rival (the same could be said for football).

College Basketball thrives while the NBA withers because “the great white hope” has an academic advantage over Black athletes as well as rule book that dictates a more defensive game. The NBA thought that offense and slam dunks would bring viewers, though that hasn’t been the case. To understand why college basketball thrives, one would be wise to consult this fantastic data that shows the political inclinations of sports fans. Conservative, right-leaning people watch college basketball, while the NBA has incredibly left-leaning fans.

Look at Duke Basketball, Jimmer Fredette, the 2010 NCAA Tournament. All the evidence you need to understand that college basketball primarily utilizes the “white game” blueprint while the NBA has decided the “thugnicity” is the way to economic success and a wonderful way to celebrate a Black Thanksgiving. The problem is, however– at least for the NBA — is that white fans are heading for exists and leaving in droves:

No one wants to acknowledge why the NBA is losing popularity. Buzz Bissinger on why white fans have trouble getting excited about African-American athletes.

My editor thinks I should write something about professional basketball. The timing is certainly rightâthe National Basketball Associationâs All-Star extravaganza starts today in Los Angeles, culminating in the All-Star game on Sunday night.

The problem is, I donât really know what to say about the NBA other than I almost never watch it anymore.

I am not a basketball junkie and I have no desire to be one. There are maybe three players I would pay to watch. The first is LeBron James of the Miami Heat, because whatever you think, and I think a lot less after his free-agency melodrama despite writing a book with him, he is the best athlete in the world today. The second is Kobe Bryant of the Los Angeles Lakers, and the third is Kevin Durant of the Oklahoma City Thunder.

The game is in trouble and I donât think there is much dispute about that. Attendance was down last year and is slightly down so far this season. Although basketball is supposed to be a team game, it has become more one-on-one in the NBA than a boxing match. The style has changed and it is a definite turnoff.

But a major problem with the NBA, one that is virtually never spoken about honestly, is the issue of race. I have no hard-core evidence. But based on my past experience in writing about sports, I know that whites ascribe very different characteristics to black athletes than they do white ones. I also make a habit of asking every white sports fan I know whether they watch the NBA. In virtually every instance, they say they once watched the game but no longer do. When I ask them if it has anything to do with the racial composition, they do their best to look indignant. But my guess is they felt very differently about the game when Larry Bird and John Stockton were playing.

Based on various statistics, the percentage of African-American players in the NBA has remained relatively constant over the past decade, fluctuating between 72 and 75 percent. The number of foreign-born players has increased exponentially to about 18 percent. The number of white American players, meanwhile, has decreased from 24.3 percent in the 1980-81 season to roughly 10 percent now.

The one white American player today who comes the closest to being a star is Kevin Love of the Minnesota Timberwolves. He is averaging 21 points a game and 15 rebounds. He is on the West roster in the All-Star Game. Do you know anyone who would pay to see Love play?

It boils down to this: Are whites losing interest in a game in which the number of white American players not only continues to dwindle, but no longer features a superstar?

My good friend and colleague Stephen Fried, who has had season tickets to the Philadelphia 76ers for a decade and has written about the NBA, says he thinks my argument is more than simply terrible. âWhile racism is a part of America and American sports and always will be, I really don’t think the main problem with the NBA is racial, and I think it’s kind of racist and certainly reductionist to say it is,â Stephen told me.

In a piece for Parade magazine last year, he wrote that the NBA game needed to be significantly modified to regain its former popularity. In talking with NBA watchers, he came up with six solutions to improve play, including shortening the 24-second clock, increasing the number of fouls for a player before fouling out, and shortening the season.

They are good ideas. But I still believe race is a key deterrent in getting more whites reengaged and increasing interest. It has to do with racial stereotyping. Those stereotypes are wrong. They are malicious. But to act is if they do not exist is disingenuous. When I wrote the book Friday Night Lights about high-school football in Texas, I saw the racial stereotypes of some whites up closeâtheir firm belief that white athletes admirably succeeded because of hustle and hard work and brains, and black athletes succeeded solely on the basis of pure athletic skill. In other words, white athletes virtuously worked their tails off whereas black athletes simply coasted because they can.

White racism is always the evil problem behind any problem in America, even the lack of ratings for NBA games. Larry Bird tried to make the game whiter in Indianapolis but was attacked for being, well, a racist.

There is no shelter from the accusation of white racism, though the future of America continues to look more and more like the sad ending of the film Mars Attacks where a mariachi band plays the Star Spangled Banner. When whites are the minority, white racism will still be the trusty whipping boy for all of America’s problems.

If Black people can complain about the lack of Black people in baseball, is it not reasonable that white people will boycott the paucity of white basketball players by sitting on their wallets and changing the channel when ESPN highlights a league that represents a Black Thanksgiving every day?

The NBA will continue to lose popularity. It is solvent now because ESPN had decided to keep it on life support by broadcasting games and acting like people still care about a sport that lacks a great white hope.

Another theory as to why great white hopes are few and far between is courtesy of Pistol Pete Maravich. When he was drafted by the Atlanta Hawks, people thought he would revolutionize the game but his predominately Black team wouldn’t pass him the ball, deciding to practice reverse racism instead. He finally snapped, saying, “I hate you. I hate all of you niggers.”

Just like Peyton Hillis in the NFL, the Black players in the NBA don’t want to see a white guy succeed on their turf. If you have played any level of sports against Black players (high school, college or professional) you know this to be true.

Let the NBA have their Black Thanksgiving. The NCAA Tournament is a white man’s feast, where white players who have no shot in NBA captivate the nation.

Without ESPN, the NBA would be in serious jeopardy of having to fold many franchises that aren’t producing financially. Enjoy your Thanksgiving, Black people.

That white shadow that stalks the NBA will remain forever haunting a league that slides into financial ruin thanks to a bunch of overpaid thugs. All the while, Richard Lapchick will be courtside applauding a league the diversity of which he fanatically gives his seal of approval.