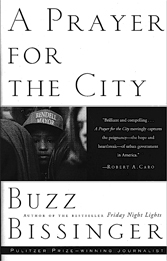 Buzz Bissinger, best known for writing the book “Friday Night Lights,” also wrote a non-fiction account of the decline of Philadelphia and the attempt by Mayor Ed Rendell to save the city.

He aptly named it a “Prayer for the City.”

Both knew the degree to which the question of race swirled through everything, since the vast majority of those living in public housing in the city were black. Both knew, because they were white, that anything they did, regardless of how much managerial sense it made, was likely to be treated with suspicions and contempt and accusations of racism. These ideas, more than mere suspicions, were vividly expressed in a remarkably candid letter that the mayor received from John Paone, the executive director of the housing authority until he left under fire in the spring of 1992.

Under the umbrella of confidentiality, Paone’s letter told a sordid tale of the forces that controlled a public institution supported by taxpayer’s money, a system of spoils in which three groups – tenant leaders, employees, and politicians – were guided by complete self-interest.

Race, Paone wrote, was used as an effective cudgel:

Another factor to take into consideration is that 95 percent of the all PHA tenants are Afro-Americans, they have been able to use racism as a weapon against successive administrations that have been predominately white and, thus have been able to frustrate reform. This is not to say you can’t have a white Executive Director, but you must have a minority Board Chairman and a significant number of minority senior staff members, including a minority Chief of Staff. (p. 191-192)

The best part of Buzz’s book Mayor Rendell (who was white) time in Philadelphia, is when he courted black clergy to stop the next Democratic primary from being a black-white bloodbath. “Being White in Philly” didn’t start in 2013…:

Rendall courted members of the city’s black clergy with a vengeance in the hopes of gaining their endorsement, and given the way they had related to the mayor in the pat, it seemed clear they were willing to listen.

At a meeting the previous February in the Cabinet Room, 18 of the city’s most powerful black ministers armed with a list of written demands had surrounded the mayor as he sat at the table. They knew how the game was played, for the first thing on their agenda was the statement that the “clergy here this morning is a cross section of denominations representing hundreds of thousand of voters.” They said they expected the mayor’s next appointments to both the Board of Education and the Zoning Board to come from their own list. They expressed their unequivocal support for the black police commissioner, Rich Neal (despite misspelling his last name)… They suggested that “serious attention be paid” to appoint an African American male as the superintendent of the city’s public school system. (p. 320)

The joys of living in a “Racial Democracy”…

Early in the book, Bissinger tried to strike a nostalgic chord, by mentioning the past glories of Philadelphia [well, the glories of white Philadelphia]:

Now, Philadelphia is the “first” city in America again for something — having its black mayor demand the 1st Amendment be scrapped:

In what is developing into an alarming challenge to free speech, Philadelphia Mayor Michael Nutter has requested that a state agency ârebukeâ Philadelphia Magazine and the author of an article titled âBeing White in Phillyâ for committing an âincitement to extreme reaction.â

One of the nationâs most prominent First Amendment scholars, UCLA law professor Eugene Volokh, told WND that the Democratic mayor is supporting âoutright suppressionâ of speech with which he disagrees.

The mayorâs letter claims that the article portrayed blacks âas an ethnic group that, in its entirety, is lazy, shiftless, irresponsible, and largely criminal.â

Worst of all, from the perspective of free speech advocates, the mayor accused the magazine of âthe sin of having allowed this article to be published.â

Philadelphia Magazineâs editor, who self-identifies as âcenter-left,â told WND he believes the mayorâs description is a âgross distortion of the piece.â

Volokh said the letter âshows that the mayor supports not just criticism of opinions that he disagrees with but outright suppression.â

“Being White in Philly” in 2013 is a glimpse into the future for what “Being White in America” will look like in 2020, with local governments forced to deal with inept black employees and corrupt black clergymen merely out for their own racial interests.

Equality has evolved in Philadelphia — it means white people aren’t allowed to have either self-interests or a voice in “The City of First’s” (The Philadelphia Human Rights Commission has expressed “concern” with the piece “Being White in Philadelphia” from ‘Philadelphia Magazine…).

And you wonder what life was like in the Soviet Union… shut your mouth whitey!

Funny though, Philly won’t be the first city to be destroyed by the Black Undertow.

Why People Canât Face the Truth
Jared Taylor
• 389 Comments • Reply
← Fourth Avenue HeartacheLife During Wartime: 98% Black Birmingh... →
Hide 36 CommentsLeave a Comment
""Being White in Philly" -- Didn't Buzz Bissinger Touch on This in 'A Prayer for the City'"
• 36 Comments
Commenters to Ignore
Commenters to ignore (one per line)