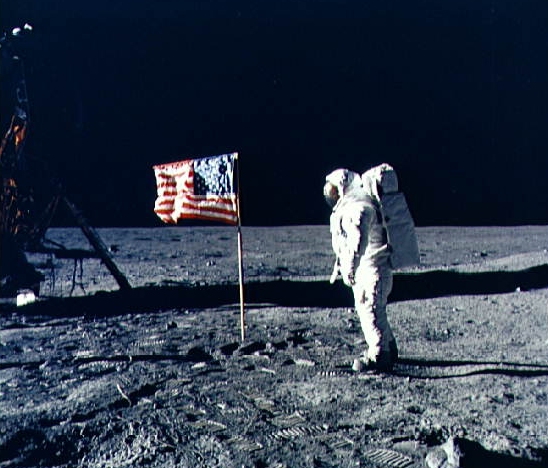 Black people look at the 40th anniversary of the United States sending three astronauts and their landing upon the moon with enthusiastic indifference.

Never has a moment captured the inherent differences between Black people and white people as much as when three white astronauts, the hard work of hundreds of white scientists and hundreds of thousands of years of evolution, culminated in the planting of the US Flag upon the moon on July 20, 1969.

If civilization and humanity originated out of Africa and white people are a recent evolutionary branch of the human race, how could they have beat Black people to moon, when Black people are a much older race upon this earth?

The “Out-of-Africa” theory of human migration is a source of pride for Black people, but paradoxically, a source of great angst, for if they have been around longer than white people, how come Black people weren’t the first to fly – like the Wright Brothers in North Carolina – or the first to come up with rocket science?

Black people look on this anniversary and moment when Neil Armstrong said, “One small step for man, one giant leap for mankind,” with utter dread: they were completely left out of the Apollo 11 mission to the moon and feel as if this is another example of Pre-Obama America that they inherently dislike.

The trip to the moon is not the culmination of mankind’s endeavors, but the culmination of European man’s dreams and ambitions. Black people believe that the white astronauts will impose cultural imperialism on the moon and subjugate any alien life form to the same insidious white standards that were imposed on the indigenous people that the ancestors of current white people imposed on Indians, Africans and other non-white; mainly slavery, colonialism, genocide, etc.

During the 1960s, the United States went to war with poverty through the programs of the Great Society, which hoped to eradicate poverty, improve literacy and help minorities through a litany of programs. That Great Society failed:

“But with the 1964 landslide of LBJ, liberalism triumphed and began its great experiment.

“Behind the Great Society was a great idea: to lift America’s poor out of poverty, government should now take care of all their basic needs. By giving the poor welfare, subsidized food, public housing and free medical care, government will end poverty in America.

…”The real disaster of Katrina was that society broke down. An entire community could not cope. Liberalism, the idea that good intentions and government programs can build a Great Society, was exposed as fraud. After trillions of tax dollars for welfare, food stamps, public housing, job training and education have poured out since 1965, poverty remains pandemic. But today, when the police vanish, the community disappears and men take to the streets to prey on women and the weak.”

Black people believe that if the $24 billion spent to go the moon – a vanity trip for white people to show of their technology – would have been spent on earth and for Black people, that the Great Society would have actually have worked!

“They were selected to go into space for the simple reason that they were the best men for the job, a criterion that today is often no longer enough, as Frank Ricci discovered. Todayâs NASA seems as interested in trumpeting its commitment to multiculturalism and diversity as in the exploration of space, a commitment that would have struck the men who actually planned and achieved multiple landings on the moon as simply irrelevant to what they were doing.”

Black people look at the accomplishment of Pre-Obama America with scorn; landing on the moon pales in comparison to the greatest achievement in mankind’s history – the election of a Black person, Barack Obama, as president – and all white achievements prior to this event aren’t worthy of study.

The New York Times on July 21, 1969, wrote about the event and pointed out the absurdity of going to the moon when so many people in the “Great Society” were being left behind:

“For all his resplendent glory as he steps forth on another planet, man is still a pathetic creature, able to master outer space and yet unable to control his inner self; able to conquer new worlds yet unable to live in peace on this one, able to create miracles of science and yet unable properly to house and clothe and feed all his fellow men, able eventually to colonize an alien and hostile environment and yet increasingly unable to come to terms with the nurturing environment that is his home”.

Thankfully, the “Out of Africa” theory might be correct as Black people in Africa now have a desire to explore space, at least according to Uganda’s president:

“Africans must travel to the moon to investigate what developed nations have been doing in outer space, Ugandan President Yoweri Museveni said Saturday.

“The Americans have gone to the moon. And the Russians. The Chinese and Indians will go there soon. Africans are the only ones who are stuck here,” Museveni said, addressing a meeting of the Uganda Law Society in Entebbe.

“We must also go there and say: ‘What are you people doing up here?’.

“Museveni urged the assembly of Uganda’s top lawyers to support East African integration, arguing that one of the region’s goals should be to develop a space programme.

“Uganda alone cannot go to the moon. We are too small. But East Africa united can. That is what East African integration is all about,” he said. “Then we can say to the Americans: ‘What are you doing here all alone?’.

Black people have had no desire to go into space until the glorious coronation of Barack Obama, which resulted in a Black person being made head of NASA. Uganda wants to go to space, but they lack the resources and technology to create a bottle rocket, let a lone a spaceship.

Space exploration will always be seen as remnants of Pre-Obama America and therefore, unworthy of admiration and a waste of time and precious money that could have been put to good use in the inner cities of America.

Stuff Black People Don’t Like includes space exploration, because the greatest accomplishments of exploring the final frontier came B.O. (Before Obama), and are not recognized in the new Black person calendar.