In the Anglosphere’s increasingly globalized media landscape different publications naturally seek out their own specific market-niches.

The New York Times promotes the official narrative of the establishmentarian mainstream, though larded these days with an increasingly irritating dollop of “wokeness.” The Financial Times and the Wall Street Journal provide the most authoritative daily business reporting, as well as news coverage that is generally more sober and less skewed than that of the Times. And London’s Daily Mail has doubled-down upon its tabloid roots to attract enormous worldwide traffic by covering stories too “hot” for its more staid rivals, or presenting these same events in a much more populist and candid fashion, rather than sanding off the rough edges.

The Mail‘s journalistic strategy has been extremely successful, and an outlet once obscure to everyone outside the British Isles has been transformed into a global media powerhouse, attracting more than twice the traffic of the Washington Post and five times that of the Wall Street Journal, with its total readership sometimes approaching that of the Gray Lady itself.

A perfect example of the Mail‘s boldness came a couple of weeks ago when it was the first and only Western media outlet to cover the remarkable public statements of Prof. Jeffrey Sachs of Columbia University, a very high-ranking academic who had served as chair of the Lancet’s Covid commission.

In May, he had co-authored an academic paper in the prestigious PNAS journal declaring that the Covid virus had clearly been produced in a lab, and calling for an independent investigation into its possible American origins. A few weeks later, he spoke even more plainly at a think-tank conference in Spain, and at the beginning of July a short clip of those remarks went super-viral on Twitter, attracting more than 11,000 Retweets and a million views:

These public revelations by an establishment insider of such high standing surely deserved worldwide banner-headlines, but instead they were totally ignored almost everywhere in the mainstream media. However, the Mail broke this embargo of silence and its story quickly attracted a couple of thousand shares and over 1,800 comments:

Back in February, the publication had also run an article presenting new scientific evidence that a crucial component of the Covid virus came from a sequence previously developed and patented years earlier by Moderna, a leading American biotech company. Although there was no evidence that Moderna itself had any direct connection with Covid, these explosive facts seemed to establish that the virus was indeed artificial and also suggested its American roots, so that story was shared some 36,000 times on social media:

The Mail has built its success by its adhering to a policy of getting there “firstest with the mostest,” focusing on the big stories ignored by the rest of the media and breaking them before any competitor. But late last week, the same Mail journalist published a long article on the origins of Covid that seemed to completely violate that rule:

According to the article’s subtitle, “Two explosive new studies seem to tip scale back in favour of natural spillover despite lab leak concerns.” The academic papers described had demonstrated that the entire pattern of early Covid infections seemed to radiate out of the vicinity of the Huanan wet market and had no geographical connection with the Wuhan lab, which was located eight miles away. Such findings severely undercut the Lab-Leak Hypothesis, widely regarded as the primary alternative to the natural virus theory. 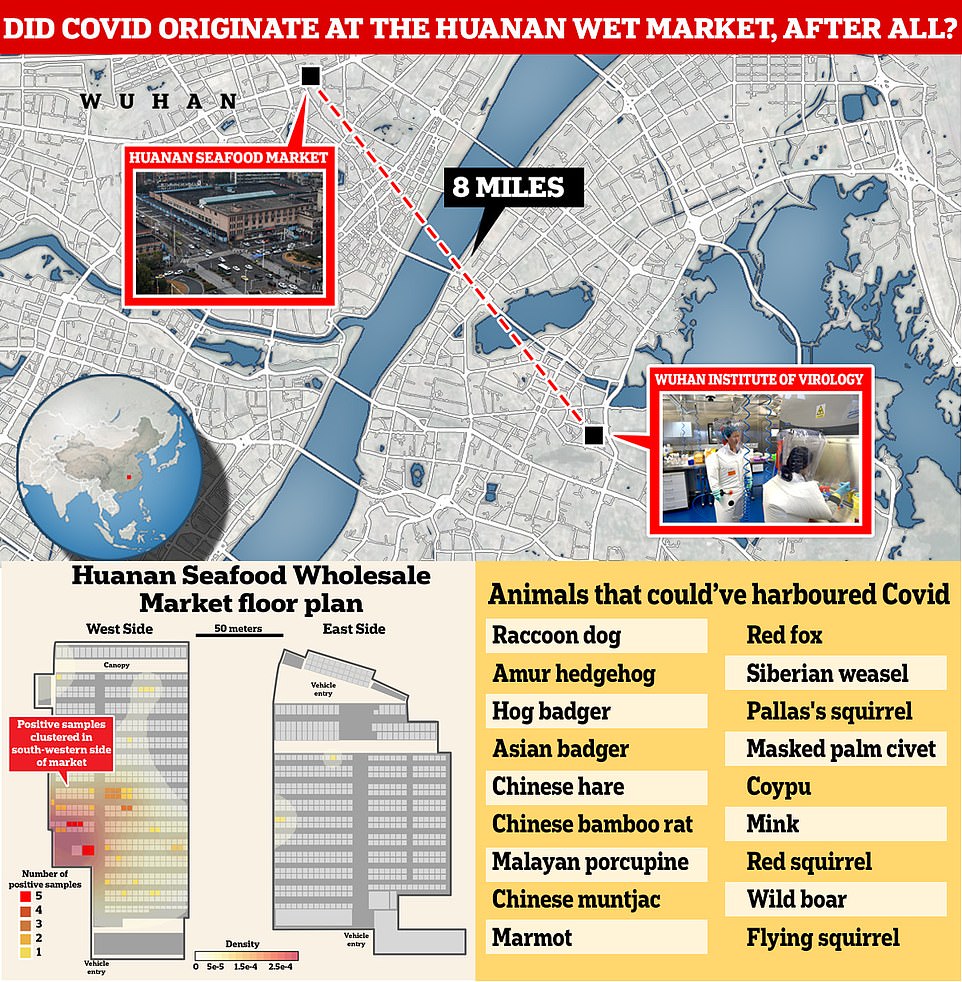 These studies were by top researchers and based upon my reading, they seemed quite solid, with important scientific conclusions. But they were released as preprints five months ago, and had already been featured in February on the front-page of the New York Times, whose article had a similar title and parallel conclusions to those of the Mail.

I very much doubt that Mail built its global readership by merely following in the wake of the Times, let alone doing so with a five month time-lag.

Instead, I suspect that the Jeffrey Sachs story they had run a few weeks ago was just a little too “hot.” Suggesting American origins for the virus that has devastated the world and killed more than fifteen million people probably brought enormous pressure down on the Mail and its writers, so publishing this clone of a February Times article may have been offered up as compensatory damage control.

Yet oddly enough, if the Mail had merely added a couple of extra paragraphs, the result would have been a hyper-explosive new story fully worthy of its best muckraking traditions. One of the earliest sentences of the article reads:

A second study claims to have pinpointed the exact date the first animal-to-human infection occurred â November 18, 2019 â after carrying out genetic analysis on hundreds of samples from the first human carriers.

However, as I’ve repeatedly emphasized in my own writings, we also know when America’s Defense Intelligence Agency first reported the Wuhan outbreak:

According to these multiply-sourced mainstream media accounts, by âthe second week of Novemberâ our Defense Intelligence Agency was already preparing a secret report warning of a âcataclysmicâ disease outbreak taking place in Wuhan.

So it therefore appears that America’s secret DIA report warning of a potentially “cataclysmic” disease outbreak in Wuhan was written before the first person had even been infected in that city, and several weeks before any symptoms would have appeared.

The implications of this massive discrepancy in timing are rather obvious, yet have been totally ignored by the Mail, the Times, CNN, and every other Western media outlet that has now reported on these important new scientific studies.

Fortunately, although the West dominates the global media, such dominance is not absolute. The bitter Ukraine proxy war between Russia and NATO has opened a few doors to other media opportunities, and due to some fortuitous timing, I was just interviewed by Russia’s Sputnik News, a major publication that draws 20 million website visits per month.

This provided me the first opportunity to present my Covid theories in a mainstream media outlet, and I naturally included mention of the striking Wuhan timing anomalies revealed by those new scientific studies. So feisty Sputnik has now scooped the suddenly faint-hearted Daily Mail on a matter of potentially world-historic importance:

The Russian government has publicly claimed that it seized evidence in Ukraine proving that the Pentagon was funding local biolabs developing biological weapons for use against Russia. As Glenn Greenwald and Tucker Carlson have emphasized, the admissions made by Victoria Nuland in sworn Senate testimony seem to support those allegations.

If the American government were so totally reckless as to be preparing biowarfare attacks against a country whose enormous nuclear arsenal could quickly incinerate the bulk of our population, it is easy to imagine that some officials would also have considered much smaller-scale attacks against other international adversaries, attacks that would have had the advantage of maintaining plausible deniability.

For more than two years, I have been publishing a series of articles arguing that there is very strong evidence that the global Covid outbreak was the result of an American biowarfare attack against China (and Iran) by rogue elements of our own national security establishment.

If this reconstruction is correct, then more than a million Americans have now recently died due to the reckless and illegal actions of their own government, an event of monumental historic importance. The incident would rank as America’s own Chernobyl disaster, but a thousand times greater in global magnitude, perhaps having similar political consequences for the survival of our own American regime.

Quite a large number of highly-regarded figures in mainstream American policy and journalistic circles are certainly aware of my hypothesis, and many of them privately regard my analysis as reasonably plausible. However, not a single one of these individuals has dared to publicly discuss it, with the topic remaining totally excluded from virtually all of the alternative media let alone its mainstream counterpart.

Indeed, I have been reliably informed that a prominent national journalist wanted to obtain a copy of my recently published Covid book but was too fearful of buying it on Amazon, or even merely reading the individual articles on my website.

Fortunately, my trilogy of Covid biowarfare video interviews from earlier this year are easily available on Rumble and these can be freely shared on social media. They provide nearly four hours of discussion on the topic, and have attracted very strong viewership, accumulating well over 800,000 total views, including more than 300,000 views during July. So perhaps this Sputnik interview will merely become the first of many.