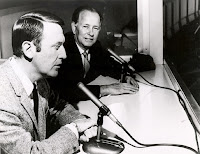 Baseball on the radio is one of the most authentic sounds of the American spring and summer. Double plays are turned, the bottom falls out of breaking balls, pitches are tapped foul, nubbed, dribbled tomahawked, drilled, driven and crushed. Pitchers look in, check runners, shake off signs, go in to their windups, batters check their swings, chase pitches, lay downs bunts, flail, are way ahead of, caught looking and rung up.

The beauty of the game on the radio is that for the knowledgeable listener, a good broadcaster can create a very complicated scene with just a few brush strokes. The first baseman is holding the runner at first, the infield is in, left and right fielders are covering the lines to protect against the extra base hit, the center fielder is playing deep and shading towards left, and the pitcher is throwing out of the stretch, one out, runners on the corners. A very complicated scenario has just been described and can be completely seen in the mind.

Brilliant folks can follow chess matches in their heads, but for the rest of us, baseball does the trick. Baseball is too obvious for television; it is the perfect sport for radio. Listening to football, basketball, soccer or hockey on the radio leaves far too much out, too much missing. A good pair of baseball announcers can paint the complete picture, while discussing the finer points of the game, or talking about a fishing trip.

So much of American culture is self-conscious, all too aware of its roots on the other side of the Atlantic, but not baseball. As ridiculous as it can seem to see a seventy year old man in a baseball uniform running toward the mound to argue a call, within the baseball world there is nothing absurd about it at all, it is as it should be. And baseball never ceases to teach you something about the game. There always seems to be a scenario or an unwritten rule that surfaces from nowhere, in the event of a suicide squeeze the pitcher should throw at the batter, for example.

Watch recent immigrants to the US as they learn the nuances of football. By the beginning of their second season they are almost completely up to speed. Rare is the immigrant from a non-baseball country who is fluent in baseball before his fifth year. Irish bartenders in New York can pick up football in a few months, but even after years of watching games every day, they are not sure, lack the confidence, the language to describe the national pastime. You canât fake baseball.

As Spring races towards us, position players report, hope springs eternal and we all dream of some kid who will breakout and turn us into a contender. Here is a classic call to wet your appetite for the coming season.

The riff raff like mixed drinks, homeruns and big scoring games, but the purists love a pitchers duel. Great pitching and great defense is the ultimate treat for a true baseball fan, a Greg Maddux affair completed in less than two hours. Work done right, on time, neatly and with precision. Maybe the greatest pitched game in the history of baseball, a total of one hit and two base runners for both teams and a perfect game for Sandy Koufax. Bob Hendley of the Cubs AND Koufax had no-hitters into the seventh. Koufax would complete his. This was Koufaxâs fourth no-hitter, he would make it a perfect game, and Vin Scully made sure they recorded the top of the ninth. Below is transcription of Scullyâs call. That an Irishman from the Bronx was ever able to speak the English language so beautifully is a monument to Jesuit education. Here is a link to the audio version. Enjoy.

The following is transcribed from a tape of Vin Scully’s broadcast of Sept. 9, 1965, when Los Angeles Dodgers ace Sandy Koufax beat the Chicago Cubs, 1-0, with a perfect game. Cubs pitcher Bob Hendley threw a 1-hitter and lost.

Three times in his sensational career has Sandy Koufax walked out to the mound to pitch a fateful ninth where he turned in a no-hitter. But tonight, September the 9th, nineteen hundred and 65, he made the toughest walk of his career, I’m sure, because through eight innings he has pitched a perfect game. He has struck out 11, he has retired 24 consecutive batters, and the first man he will look at is catcher Chris Krug, big right-hand hitter, flied to second, grounded to short. Dick Tracewski is now at second base and Koufax ready and delivers: curveball for a strike.

0 and 1 the count to Chris Krug. Out on deck to pinch-hit is one of the men we mentioned earlier as a possible, Joey Amalfitano. Here’s the strike 1 pitch to Krug: fastball, swung on and missed, strike 2. And you can almost taste the pressure now. Koufax lifted his cap, ran his fingers through his black hair, then pulled the cap back down, fussing at the bill. Krug must feel it too as he backs out, heaves a sigh, took off his helmet, put it back on and steps back up to the plate.

Tracewski is over to his right to fill up the middle, Kennedy is deep to guard the line. The strike 2 pitch on the way: fastball, outside, ball 1. Krug started to go after it and held up and Torborg held the ball high in the air trying to convince Vargo but Eddie said nossir. One and 2 the count to Chris Krug. It is 9:41 p.m. on September the 9th. The 1-2 pitch on the way: curveball, tapped foul off to the left of the plate.

The Dodgers defensively in this spine-tingling moment: Sandy Koufax and Jeff Torborg. The boys who will try and stop anything hit their way: Wes Parker, Dick Tracewski, Maury Wills and John Kennedy; the outfield of Lou Johnson, Willie Davis and Ron Fairly. And there’s 29,000 people in the ballpark and a million butterflies. Twenty nine thousand, one hundred and thirty-nine paid.

Koufax into his windup and the 1-2 pitch: fastball, fouled back out of play. In the Dodger dugout Al Ferrara gets up and walks down near the runway, and it begins to get tough to be a teammate and sit in the dugout and have to watch. Sandy back of the rubber, now toes it. All the boys in the bullpen straining to get a better look as they look through the wire fence in left field. One and 2 the count to Chris Krug. Koufax, feet together, now to his windup and the 1-2 pitch: fastball outside, ball 2. (Crowd boos.)

A lot of people in the ballpark now are starting to see the pitches with their hearts. The pitch was outside, Torborg tried to pull it over the plate but Vargo, an experienced umpire, wouldn’t go for it. Two and 2 the count to Chris Krug. Sandy reading signs, into his windup, 2-2 pitch: fastball, got him swingin’!

Sandy Koufax has struck out 12. He is two outs away from a perfect game.
Here is Joe Amalfitano to pinch-hit for Don Kessinger. Amalfitano is from Southern California, from San Pedro. He was an original bonus boy with the Giants. Joey’s been around, and as we mentioned earlier, he has helped to beat the Dodgers twice, and on deck is Harvey Kuenn. Kennedy is tight to the bag at third, the fastball, a strike. 0 and 1 with one out in the ninth inning, 1 to nothing, Dodgers. Sandy reading, into his windup and the strike 1 pitch: curveball, tapped foul, 0 and 2. And Amalfitano walks away and shakes himself a little bit, and swings the bat. And Koufax with a new ball, takes a hitch at his belt and walks behind the mound.
I would think that the mound at Dodger Stadium right now is the loneliest place in the world.
Sandy fussing, looks in to get his sign, 0 and 2 to Amalfitano. The strike 2 pitch to Joe: fastball, swung on and missed, strike 3!

He is one out away from the promised land, and Harvey Kuenn is comin’ up.
So Harvey Kuenn is batting for Bob Hendley. The time on the scoreboard is 9:44. The date, September the 9th, 1965, and Koufax working on veteran Harvey Kuenn. Sandy into his windup and the pitch, a fastball for a strike! He has struck out, by the way, five consecutive batters, and that’s gone unnoticed. Sandy ready and the strike 1 pitch: very high, and he lost his hat. He really forced that one. That’s only the second time tonight where I have had the feeling that Sandy threw instead of pitched, trying to get that little extra, and that time he tried so hard his hat fell off — he took an extremely long stride to the plate — and Torborg had to go up to get it.

One and 1 to Harvey Kuenn. Now he’s ready: fastball, high, ball 2. You can’t blame a man for pushing just a little bit now. Sandy backs off, mops his forehead, runs his left index finger along his forehead, dries it off on his left pants leg. All the while Kuenn just waiting. Now Sandy looks in. Into his windup and the 2-1 pitch to Kuenn: swung on and missed, strike 2!

Two and 2 to Harvey Kuenn, one strike away. Sandy into his windup, here’s the pitch:
Swung on and missed, a perfect game!

(38 seconds of cheering.)
On the scoreboard in right field it is 9:46 p.m. in the City of the Angels, Los Angeles, California. And a crowd of 29,139 just sitting in to see the only pitcher in baseball history to hurl four no-hit, no-run games. He has done it four straight years, and now he caps it: On his fourth no-hitter he made it a perfect game. And Sandy Koufax, whose name will always remind you of strikeouts, did it with a flurry. He struck out the last six consecutive batters. So when he wrote his name in capital letters in the record books, that “K” stands out even more than the O-U-F-A-X.