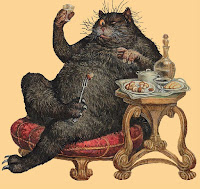 I have a good friend who is very intelligent. She is a highly educated scientist and I would say that her IQ is in the 135+ range. But not only is she very intelligent, she is unselfconsciously intelligent, which is a refreshing trait in todayâs self-congratulatory culture. Remember when athletes didnât jump up and down like little girls every time they did what they were being paid millions to do? Thank God for baseball, nothing like a 95 MPH fastball up and in to shut up a blowhard. But back to cats.

My friend is not only very smart and unpretentious, she is a genuinely good person, you could say she is very kind, maybe the âmost goodâ person I have ever known. She never makes grandiose statements, never gives big speeches, and her most common answer is âmaybeâ or âI donât know.â So yours truly feels like a stupid, pedantic and evil human in her presence, but thatâs another story.

She has a cat named Moshe. Moshe is a black cat with patches of white on his paws and neck. Moshe is a street cat, brought to my friendâs house as a lost kitten by the neighborhood kids. He is very wild and would just as soon bite or scratch you as purr in your lap. Moshe has something of Bulgakovâs foul mouthed, vodka swigging Behemoth. When Moshe bites me or scratches me, I usually give him a good swift kick in the ass, but we have, for the most part, learned to maintain a tense truce.

Now Moshe, like all cats, is very peculiar. He is fascinated by water, like many cats, and while eating is his biggest joy, there seems to be one thing that he enjoys more, and that is classical music. If Bach is on the sound system not even the shaking of his food bag will bring him out of the bedroom to eat. And he has a strange affinity for books. Don DeLilloâsUnderground, a serious tome, was on the widow sill for awhile and Moshe always rested his head on the book as if he were pondering DeLilloâs Cold War America. Watching this, I made the comment to my friend that maybe her feline companion had been a member of the aristocracy in a past life, but probably due to some homicidal tendencies was brought to the world as a cat.

In a rare, passionate outburst, she stated that I was completely wrong. Moshe had been a member of the aristocracy, but had lived such an exemplary life that he was brought back to this world as a cat and that cats are actually a superior life form to humans. My first reaction was a look of dismay, followed by âhe is a (fill in with your favorite colorful expletive) cat!!â

My friend, never one for big speeches, simply said that cats have good lives, donât have to worry about anything and have certain extra sensory powers. This is true. Cats are contemplative creatures, and maybe she is right, maybe they are contemplating consciousness itself as they sprawl under the radiator and look upon their flat mates with disdain. And cats do have an incredible efficiency of movement, an elegance that no human could ever even dream of matching.

But superior being! However, the more I thought about it, the more I lost confidence in my superiority to Moshe. Moshe is extremely cool, this is true. I could never hope to be so smooth. Next time he bit me I just slapped him instead of kicking him.

Now I love dogs, one of my best friends is a gold Lab, Leo. Leo is just about the best guy I know. He’s always happy to see me, the only friend I have who jumps up and down anytime I pop in on him. Leo has his priorities straight: hanging out with his buddies, eating, sex, and fighting, usually in that order. What more could you ask for in a friend? Thank God Leo canât drink or we would be inseparable. Now while Leo is the ideal male, he is not a superior being, he is just more perfect. He embodies human masculinity in its most pure form, but doesn’t transcend it. When I look in Leoâs eyes I see a great guy, but when I look in Mosheâs eyes I see something else, a different life form, which until recently, I assumed was a lower one.

One terrifying idea is Moshe, the size of Leo, strolling down the street. He wouldn’t just terrify me; he could terrify an entire village. Just beginning to imagine Mosheâs revenge on me if he were suddenly enlarged by a factor of five makes me tremble.

Now many of you cat lovers are probably pounding your desks saying âthis clown has never owned a cat!â, but that is not true. I have had two cats, or, I should say, I shared an apartment with a Persian male, Dashiel, I believe he was gay, and a perky Siamese gal, Piper, who loved running around the neighborhood at night. You never own a cat like you do a dog, the cat owns the apartment and lets you stay on with the condition that you feed them and clean their litter box. I have woken up in the middle of the night to have the eerie experience of seeing my cat staring straight in my eyes, convinced he was about to speak.

Slowly I was becoming convinced that maybe my friend had a point. Cats do have that special way of resting on you just where you ache and curing you with their purring. They donât speak, this is true, but the way they express themselves with their tails and ears is far more interesting than most spoken language. And while they are obviously slaves to their instincts, as we all are, they unselfconsciously accept their needs, and spend the rest of the day in a life that could only be compared to that of very wealthy, anarchist Zen monk.

It seemed every time I compared cat traits to human traits, the cat won. Cooler, completely efficient in movement, born without the need for clothes, of such a high social status that just the thought of work makes them nauseous, spiritually enlightened MDâs. What man could ever dream of having the quality of life of cat?

But what I most admire about cats is their penchant for striking the most bizarre, comically sublime poses. It is impossible not to watch them sprawled out on their backs, paws up, peering directly at you, and not think they are communicating something very profound, much more profound than any human dancer could ever transmit.

Last time Moshe bit me I just sucked it up- I am beginning to worry my friend might be right.