◄►Bookmark◄❌►▲ ▼Toggle AllToC▲▼Add to LibraryRemove from Library • BShow CommentNext New CommentNext New ReplyRead More
ReplyAgree/Disagree/Etc. More... This Commenter This Thread Hide Thread Display All Comments
AgreeDisagreeThanksLOLTroll
These buttons register your public Agreement, Disagreement, Thanks, LOL, or Troll with the selected comment. They are ONLY available to recent, frequent commenters who have saved their Name+Email using the 'Remember My Information' checkbox, and may also ONLY be used three times during any eight hour period.
Email Comment Ignore Commenter Follow Commenter
Search Text Case Sensitive  Exact Words  Include Comments
List of Images
List of Tables
List of Bookmarks 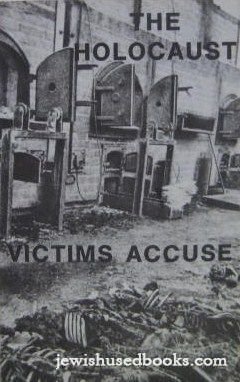 The sub-title of this book is “Documents and Testimony on Jewish War Criminals.” Its position on the “Holocaust” is a remarkable one. Rabbi Shonfeld belongs to an ultra-orthodox sect of Hassidic (or Chassidic) Jews who regard the state of Israel as a blasphemy. Their view is that Israel may only be founded when the Messiah comes, and, quite obviously, neither David Ben-Gurion, nor Golda Meir, nor Menachem Begin, are the Messiah. Throughout the text, “Israel” is written in quotation marks, in a style that echoes the habit of some Revisionist scholars who insist on writing “Jews” in quotes (since most modern-day Jews are not from Judea at all, but from Khazakhstan). From time to time, the author also refers to “Eretz Yisroel.” The text of the book consists of ten indictments against various wartime Zionist leaders, who in the author’s opinion, deliberately sacrificed their fellow Jews in the “Holocaust” so that the elite Jews could be granted passage to Palestine. He also condemns those loud-mouthed Zionists in the United States, who “stupidly antagonized the Nazi fuhrer … by making speeches and blowing shofar in front of the German consulate … and by calling for a boycott of German goods. ” The author also apologizes for having to use the term “Holocaust” since it “has been turned into a Zionist battlecry, which we abhor, but have been forced to use for identification purposes.”

The rabbi focuses on the Eichmann trial in Jerusalem, which was the first time Jewish collaboration with the Nazis was brought into the open. He condemns Romkowsky, the leader of the Zionist movement in Lodz, who became a ruthless tyrant when the Nazis put him in charge of the ghetto. A postage stamp bearing his portrait, and an inscription in Yiddish, is shown on page 23. On page 19 there is a picture of the Jewish police in the Kovna ghetto, looking every bit as sinister as the Gestapo in their black uniforms.

The author quotes the Zionist leader Chaim Weizmann, who at the 1937 Zionist Congress in London, stated that only the young Jews should go to Palestine. The aged and infirm would “have to accept their fate.” Henry Montor, of the United Jewish Appeal, said the same. He attacks the Holocaust folk-hero Abba Kovner, who sang his own praises so much on the witness stand at the Eichmann Trial that the judges had to intervene; much to Kovner’s chagrin. Contrary to the widely-held impression that Kovner was a courageous anti-Nazi partisan (and p set, to boot!) the author reveals that he was a collaborator, who handed over elderly Jews to the Nazis in order that youthful Jews-such as himself-could be granted passage to Palestine. He backs up his allegation with eye-witness evidence.

Weizmann again comes in for criticism regarding the Joel Brand affair. Brand was a Jew delegated by the Hungarian Zionists in collaboration with Eichmann to negotiate a trucks-for-Jews deal with the Allies in 1944. Weizmann, apparently, refused to see Brand when he arrived in Tel Aviv, and Brand was then arrested by the British.

Dr. Rudolf Kastner is castigated for his role in the trucks-for-Jews deal. Eichmann dressed him up in an SS uniform to take him to Belsen so that he could identify his relatives and friends, and secure their seats on the single train that would be allowed to leave. The rabbi alleges that Kastner bribed Eichmann, and that Eichmann used this money to set up home in Argentina after the war. The starvation in the Jewish ghettos is blamed on American Zionists who picketed the depots from where food parcels were being mailed. Their placards demanded “Stop sending food to the lands of the Nazi enemy!” The author further condemns the Zionists in “Eretz Yisroel” for murdering 250 Jews on board the SS Patria in Haifa harbor in 1940. The idea was to blame this bombing atrocity on the British mandatory authorities.

Despite much fantasizing about the “Holocaust” this book represents an important chapter in the history of the relationship between the Nazis, the Zionists, and the Allies, which has never before been published. A 28 page review of the book is also available from a Mr. M. Qureshi at PO Box 319, Perry, OH 44081, entitled The Great American Holocaust by Zionism (price not known).

• Tags: Holocaust
Also by this author
← Letter from BerlinThe Mendacity of Zion →
Current Commenter
says:
Current Date at Time Now
For this content material, only substantive commentary that is highly topical and written in a respectful manner will be displayed by default. Off-topic or vulgar comments may be ignored.
Cancel Reply

Subscribe to All Lewis Brandon Comments via RSS
PastClassics