Defense attorney and constitutional scholar John Remington Graham maintains that despite being two separate countries with different cultures and legislative interests, North and South had been held together by statesmen effecting compromises. Before differing interests could break them apart, hatred had to be fomented between North and South. He states his position clearly: âThe American Civil War likewise would not have happened if it had not been planned and fomented.â

Graham says that bankers, principally Rothschilds and Morgans, wanted a massive war that would greatly expand US national debt. By acquiring this debt and having legislation passed that would designate the debt as reserves for the issuance of money and credit, the banks would be able to use their power to expand or contract the supply of money and credit to control government and rule the country. As the quote attributed to Mayer Amschel Rothschild puts it, âGive me control of a nationâs money and I care not who makes itâs laws.â Graham concludes that âthe most important consequence of the American civil war was loss of the monetary independence of the United States. And that, as a practical matter, was also loss of political independence behind a facade of âfreedomâ and âdemocracy.ââ

To create the hatred necessary for war, the bankers financed John Brownâs Harperâs Ferry raid, the marketing of Uncle Tomâs Cabin, the 11-year long court case of Dred Scott, and a variety of other machinations that served to brew hatred awaiting a catalyst to set off war. Graham does not identify the catalyst. He argues correctly that it was not slavery and incorrectly that it was not the Morrill Tariff. 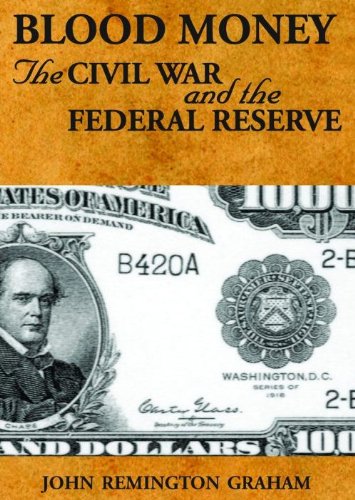 The new system of national banks created on the war debt permitted banks to make loans at interest on the basis of the bonds as reserves while simultaneously collecting interest on the bonds. The currency issued by state chartered banks was driven out of circulation.

Graham draws on the writings, speeches, and warnings of US Representative Charles A. Lindbergh, the father of the famous aviator, and J. B. Jones to make his case.

Himself a northerner, Graham sees the South as the superior civilization, as it was based in religion, morality, and chivalry in contrast to the money-grubbing North with its hidden agendas. The abolitionist movement was far stronger in the South than in the North. Graham reports that in 1832 the Virginia House of Delegates passed a resolution which lamented âthe great evils of arising from the condition of the colored population of the commonwealth.â

The problem with freeing the slaves was what would become of them. On the plantations they had food, housing, and medical care. If evicted, there were no welfare programs, Social Security or Medicare. To convert them into a free work force would require care and time. No one knew what to do. Lincolnâs solution was to send the blacks out of the country. After the South was destroyed by war, estimates are that one-fourth of the blacks died of starvation and exposure.

The North was more business-like in its approach. The North wanted the slaves as wage labor that did not have to be taken care of in old age, as the plantation owner had do do. Unlike the plantation, once the northern industrialists used up a person, the person could be discharged.

Being a civilized people, the southern people, Graham writes, had no idea of the barbarity of the North and âwere wholly unprepared to resist the juggernaut which had been ruthlessly bought to march against them.â

The war gave the bankers what they wanted. Moving on with his story of the development of their power, Graham explains how the Financial Panic of 1907 was orchestrated in order to set up Congress for the Federal Reserve Act prepared by a handful of bankers and their agents at Jekyll Island.

Graham provides reform measures and a legal basis for getting rid of the Federal Reserve, which has done the United States so much damage, and for restoring the coinage of money to the government of the people.

Seldom in 100 pages counting notes has there been so much information on how we have been deceived and used and how we can retrieve our fate from the hands of bankers. Grahamâs monograph, in a real free society in which all explanations were not controlled by the establishment, would become the catalyst for a new investigation of the War of Northern Aggression and its consequences. American Pravda: the JFK Assassination, Part I - What Happened?
Ron Unz
• 1,246 Comments • Reply
← The Case of Dred ScottHow Lincolnâs War Was Won →
Hide 156 CommentsLeave a Comment
"The Bankersâ Blood Money: Secession and Invasion"
• 156 Comments
Commenters to Ignore
Commenters to ignore (one per line)

← The Case of Dred ScottHow Lincolnâs War Was Won →
Current Commenter
says:
Current Date at Time Now
Leave a Reply - Comments on articles more than two weeks old will be judged much more strictly on quality and tone
Cancel Reply