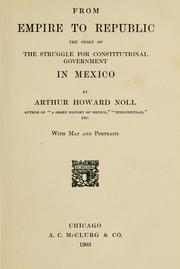 From Empire to Republic (1903)
by Arthur Howard Noll
The Story of the Struggle for Constitutional Government in Mexico
Show MoreShow AllFinding...Find More