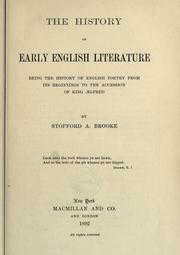 The History of Early English Literature (1892)
by Stopford A. Brooke
Being the History of English Poetry from Its Beginnings to the Accession of K...
Show MoreShow AllFinding...Find More