Iâve got an article up exclusively at Asia TimesâPentagon Looks Beyond FONOPs in the South China Sea— on the latest wrinkle in the US tussle with the PRC in the South China Sea: augmenting the maritime âFreedom of Navigationâ gambit with a new focus on the PRC threat to regional and US territorially-based interests.

The whole US maritime FON + UNCLOS + EEZ strategy had a pretty gaping loophole. These approaches explicitly exclude issues of sovereignty over above-sea-level claims. So the PRC retreated to the land, some of which it created through its island-building program, and has displayed a certain insouciance in observing the indignant FONOP sailarounds organized by the US Navy and, for that matter, Ash Carterâs attempt to goad them by releasing a picture of himself in an Osprey V22 tiltrotor above a US aircraft carrier in the SCS.

The event occurred in November 2015 (during a transit through the SCS by the Theodore Roosevelt, not the March 2016 operation in the SCS by the John Stennis; the carrier that’s supposed to be doing these stunts, the Japan-based Ronald Reagan is irrevocably contaminated with radiation from the Tomodachi operation and maybe has too many crew and/or safety issues to get on the water, so carriers from San Diego and the Gulf have to pick up the slack–that’s a story hook, journos) but now was apparently the time to share this heroic image with the world.

So, with the maritime strategy in danger of petering out, the US is now starting to hype PRC threats to the Philippines and to the US military assets that will be ârotated throughâ the base access rights granted under EDCA.

That was a theme in the blockbuster scoop in Navy Times that everybody should read for its unambiguous declaration of war by Navy China hawks against the lame duck and rollable Obama White House: that any PRC island-building on Scarborough Shoal would be deemed a threat to US military forces based in the Philippines.

One of the bases the US has obtained access to under EDCA is Antonio Bautista Air Base on Palawan Island waaaaaaaaaaaaaaaaaaaaaaaaaaaaaay out in the South China Sea (or as others prefer to call it, the West Philippine Sea), which was obviously chosen because itâs close to the Spratly Islands. 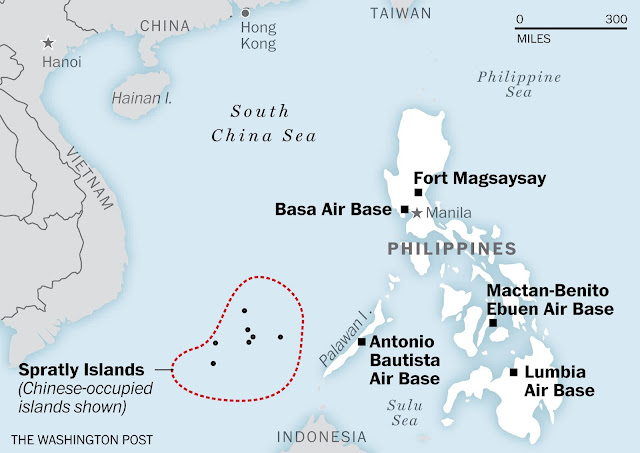 Ash Carter is expected to visit the base during his drop in on the Balikatan joint US-Philippine military exercise. The run-up to the exercise has included an inordinate amount of publicity concerning trial firing of the HIMARS mobile missile battery which can be equipped with a 300 km range GPS guided cruise missile.

There is some talk that the Philippines will be allowed to keep the HIMARS after Balikatan concludes, in fact at Antonio Bautista Air Base and, if fitted with the cruise missile option, could place the PRC outpost on Mischief Island within range. If so, I expect noble efforts from Western scribes to explain how the PRC is militarizing the Spratly environment.

I wouldn’t be surprised if the PRC “military capable” airfields in the Spratlys, even without the issues of radars and missile batteries, are deemed a credible threat to US forces at Antonio Bautista.

Another good argument for leaving the HIMARS in the Philippines is political: to feed the PRC threat narrative and try to pre-empt any anxious thoughts of appeasement by the various Philippine presidential candidates as the UNCLOS arbitration judgment looms.

There are interesting indications that the PRC is itself quietly talking appeasement in its private discussions with aggrieved regional claimants over fishing rights, and that perhaps local love for the US-backed confrontational maritime strategy is not universal in the Philippines and elsewhere.

High profile frictions with Indonesia and Malaysia concerning intrusions by PRC fishing boats into EEZ waters (and the potentially explosive allegation that a PRC hulking coast guard vesselâbasically a decommissioned frigate that still has a couple anti-aircraft gunsâentered Indonesian territorial waters to grab a fishing boat seized by an Indonesian fisheries enforcement vessel) to date have failed to yield the necessary pivot-boosting public outrage. Instead, they are being addressed discretely in private diplomacy between the PRC and the injured parties, an anathema to pivoteers seeking to draw Chinaâs aggrieved neighbors under the umbrella of US leadership.

One factor might be the desire of Malaysia and Indonesia to maintain freedom of movement in their dealings with China despite being berated by pivoteers for spinelessness (the US embassy in Jakarta arranged a publicized conference call by core pivoteer from the US Naval War College, Peter Dutton of âBe Nice and Shareâ fame, to give advice on dealing with the PRC that Indonesia, which stakes its regional identity on an independent honest broker/emerging power basis, perhaps did not appreciate).

Another factor may have been a generous supply of carrots from the PRC, anxious to keep the ASEAN countries divided or at least equivocal as PRC defeat on the UNCLOS arbitration looms.

The immediate response to the Indonesian incident was virtual panic at the PRC Ministry of Foreign Affairs, followed by a deep public silence.

A think tank with PRC affiliations in the United States (yes, they do exist) that counts the public face of PRC South China Sea strategy, Wu Shicun, as its adviser, published a piece in Global Times that posited the validity of âhistorical fishing rightsâ that override UNCLOS and would therefore survive a negative ruling on the Nine Dash Line.

The kicker was that the rights would be ânon-exclusiveâ in other words, the PRC could get a share of fishing rights in somebody elseâs EEZ, for instance at Scarborough Shoal.

Given the welter of overlapping claims and contention (in addition to its dustup with the PRC, Indonesia has been not only seizing but also blowing up over a hundred seventy fishing boats from Malaysia, Vietnam, Papua New Guinea, Taiwan, etc. to enforce its maritime domain), this might even be a form of consensual divvying up that all SCS claimants might like.

However, the Philippines window to avail itself of the PRCâs offer is rapidly closing as US policy drives its security policy and ramshackle presidential politics.

And I think the US would be loath to see expressions of bilateral comity around the South China Sea that would undercut its thesis that a united confrontational stance backed by US muscle is the best way to solve the complex problems in the SCS.

One sign that the DoD wants to draw a hard clear line with the US and the Asian democracies on one hand and the PRC on the other was Carterâs decision to snub the PRC and cancel his previously planned visit as part of his India/Philippines swing.

Carterâs Council on Foreign Relations speech on April 8 was, in fact, rather embarrassing in its over-the-top India adoration and cheerleading for defense co-production agreements, perhaps a sign that the bazaar is open and now, when the US needs public support for its PRC policy, is the time for India to dive in and scoop up the best deals on US defense cooperation.

The US wants the anti-PRC alliance to go to the next level, not wobble.

So it will be interesting to see what other provocations, in addition to visit cancellations, taunting helicopter photos, HIMARS, and more aggressive FONOPs are in the offing…and whether PRC fishery appeasement is allowed to gain any traction. The Ultimate Pivot Pricetag: A Luxury Resort on Scarborough Shoal
...With Its Own Floating Nuclear Power Station!
Peter Lee
• 13 Comments • Reply
← Maybe Cuba Should Have Kept Those Sovie...Ash Carterâs Asian Folly →
Hide One CommentLeave a Comment
"US Switch from âMaritimeâ to âTerritorialâ Narrative for SCS While PRC Explores Appeasement"
• One Comment
Commenters to Ignore
Commenters to ignore (one per line)