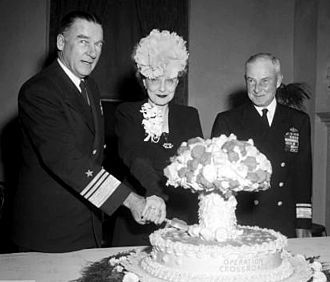 I have an article up exclusively on Asia Times, The Case of the Missing Nukesâ¦and a Disappearing US Mission in Asia, concerning an interesting and, I fear, transitory lack of tactical nuclear weapons in theater in Asia.

I see tactical nukes making a comeback in Asia, probably courtesy of the Long Range Stand Off weapon a.k.a. nuclear-tipped cruise missile that the Pentagon probably sees as the real game-changer in countering the PRCâs military buildup. I’m addressing that issue in depth in a separate piece.

I suspect the US Navy itself is happy to be out of the tactical nuclear business and, in fact, fears their return.

For one thing, surface ships do not do well in nuclear exchanges, tactical or otherwise, something that might appear obvious in retrospect but needed to be demonstrated to the overly-optimistic Navy brass by detonating a nuclear warhead amid a flotilla of derelict ships at Bikini Atoll for the benefit of Admiral Blandy.

I have a detailed write-up on the far-reaching significance of the Crossroads test (and the background of the legendary cake picture)here.

Second, judging by an appalling litany of Navy-related nuclear accidents compiled by the Federation of American Scientists, a pitchy platform on a slobbery ocean filled with enemy ships and other manmade and natural hazards is perhaps not the best place to store a nuclear arsenal.

Dozens of nuclear weapons were lost at sea over the decades because they were on ships, submarines, or aircraft that were lost. On December 5, 1965, for example, while underway from operations off Vietnam to Yokosuka in Japan, an A-4E aircraft loaded with one B43 nuclear weapon rolled overboard from the Number 2 Elevator. The aircraft sank with the pilot and the bomb in 2,700 fathoms (4,940 meters) of water. The bomb has never been recovered.

Hereâs a picture from the FAS piece showing the aircraft carrier USS Enterprise on fire in 1969 after a conventional warhead exploded, ignited some jet fuel & caused a chain reaction of munitions and fuel explosions.

In all, there were 18 munition explosions or detonations. Eight holes were blown through the flight deck and deep into the ship. It took in a little over three hours to extinguish all of the fires. This incident resulted in 28 deaths and 344 injuries. There were 17 aircraft damaged and 15 destroyed. The cost of repairing the structural damage to the ship and replacing the aircraft and other equipment was over 126 million dollars.

According to the captain, losing the ship was a distinct possibility. In addition to its 8 nuclear reactors, the Enterprise carried about 100 nuclear bombs.

Six years later, the aircraft carrier USS Kennedy, also with about 100 nuclear bombs, struck and almost sank the USS Belknap. The Belknapâs aluminum superstructure burned to the deckline in the resulting fire (helping convince the US Navy to move to all-steel construction), killing 6, and the fires were stopped within a few feet of the bunker containing the Belknapâs nuclear munitions (warheads for its Terrier SAM battery).

â¦and the loss of the USS Scorpion.

Even strategic subs, which I understand are supposed to stay aloof from the fray and lurk in safe, remote waters, have apparently had several accidents.

1974: The USS James Madison dives on top of a Russian attack sub that I guess was rather successfully shadowing it. 160 nuclear warheads on the James Madison. Number on Russian sub unknown.

1998: Collision between USS Kentucky & a US attack sub off Long Island; 192 warheads on Kentucky alone.

Thatâs just a sampling of what we know about. The FAS page has more.

And that’s just vulnerabilities exhibited in normal peacetime operations, without enemies shooting missiles, setting off bombs, firing torpedos, and whatnot. So maybe the US Navy on balance prefers that somebody else worry about storing and delivering tactical nuclear weapons.

Thirdly, nukes, especially tactical nukes, reduce the need for big, expensive conventional maritime platforms like aircraft carriers, destroyers, and so on, especially in dealing with a nuclear power like the PRC.

Because of the re-nuking of Asia, at least in US “defense” doctrine, that I anticipate, I view current Navy activities in the West Pacific as a dash by the US Navy to create a narrative supporting its relevance and enabling it to bulk up its position in the few years before the return of tactical nuclear weapons and growing local qualms about the wisdom of the pivot combine to sunset the Navy’s dominance of the China-containment narrative.

Make non-nuclear hay while the sun shines, in other words! The Doomsday Clock
Nuclear Weapons, Climate Change, and the Prospects for Survival
Noam Chomsky
• 50 Comments • Reply
← Everything You Think You Know About Sca...US Pivot to Asia Poised to Enter Nuclea... →
Hide 10 CommentsLeave a Comment
"US Navy No Likee Nukie?"
• 10 Comments
Commenters to Ignore
Commenters to ignore (one per line)

← Everything You Think You Know About Sca...US Pivot to Asia Poised to Enter Nuclea... →
Current Commenter
says:
Current Date at Time Now
Leave a Reply - Comments on articles more than two weeks old will be judged much more strictly on quality and tone
Cancel Reply
Commenting Disabled While in Translation Mode