My post on the competing strategies of Saudi Arabia and Qatar received a considerable amount of thoughtful comment and pushback by e-mail and on the Web, more than Iâm accustomed to receive for a non-China post from somebody who has only an informed laymanâs interest in the Middle East.

Maybe I came up with something worth thinking about. Well, even a blind hog finds a truffle every once in a while. [see note below]

More to the point, I think my post contributed to a crystallizing sense in the foreign policy realm that Saudi and Qatari differences are probably central to what has become the nagging Syrian conundrum, namely, why have the Western regimes, Turkey, and the Gulf Cooperation Council been unable to club together and crater the Assad regime?

From the moral imperative side of the equation, consider Libya. We interrupted Gaddafi in what the midst of what was much less than a counterinsurgency and more of a police action in pursuit of the armed rabble of eastern Libya. When the NATO no-fly zone was launched, only two or three thousand people had died, about a quarter of them in Gaddafiâs forces. At the time, correspondents in Washington were given a bullsh*t backgrounder claiming that intervention was required because of an impending massacre of up to 50,000 innocents in Benghazi. Post-war, there has been an embarrassing dearth of evidence concerning Gaddafiâs genocidal rage; Libyaâs Deputy Minister of Martyrs announced that the current count was 4700 rebel dead and 2100 missing, something of a drop from the 2011 estimate of 25,000.

Contrast this with Syria.

No matter who does the counting, there are tens of thousands dead in Syria, hundreds of thousands of IDPs and refugees shivering miserably through the winter, and if there was ever a case for getting off oneâs ass and doing a humanitarian intervention, Syria is now it.

If the grim mechanics of regime subversion rather than humanitarian intervention are oneâs cup of tea, on the other hand, all the elements are in place to implode the Assad regime: widespread popular dissatisfaction, a collapsed economy, a weary army, international sanctions, covert financial and material support of the rebels, an influx of hardened fighters, and safe havens in Turkey.

Despite the solidarity of the ruling elite, support from Iran, China, and Russia, and Assadâs bloody and successful obstinacy in repressing his domestic opponents, after close to two years of the baleful attention of Assadâs enemies in the West, the Gulf, and Turkey, Syria is a basket case.

But nobody has stepped up to say (to paraphrase Nigel Tufnel) Letâs turn it up to 11, pour in the money, arms, and fighters, maybe set up a no-fly zone and erase Assadâs air assets, and end this thing.Instead, the Syrian crisis lurches on, absent the external political will to finish the job or shortcircuit the insurrection with a negotiated transition.

Bernard at Moon of Alabama kindly excerpted my post and took issue with it. He is of the opinion that even the Saudis are losing their appetite for further butchery in Syria, and Assad may be able to cut a deal to get the Saudis and everybody else off his back (as heâs been trying to do for two years) and weather the storm.

I dunno. Bernard knows a lot more about the Middle East than I do and his post is detailed and quite persuasive. Butâ¦

I look at what the various players are saying (and not saying) and doing (and not doing) as reported in the Western language press, and I conclude the problem is that the get-Assad coalition canât get on the same page with Saudi Arabia or find a way to finesse a political settlement out of the bloodbath.

Looking at the political calculus, I find it hard to believe that the United States, after having spent over a year building up Assad as the latest monster of the century, is willing to suffer the loss of face that is involved in having him stay on as part of a deal. That, to me, is just not how the US operates. A key element of US foreign policy is the idea of credibility and being perceived as a reliable ally, one that does not stake out positions and then abandon them. US credibility took a hit in the Gulf countries thanks to the Obama administrationâs equivocal response to the Egyptian revolution (first trying to bolster Mubarak and then pulling the plug), and from the plainly stated US desire to pivot to Asia and its riches (and away from the Middle East and its headaches). I donât think the US is going to get out in front of the anti-Assad coalition and insist on a negotiated settlement.

Unless there is a united call from Turkey and the GCC, in other words, to let bygones be bygones and work with Assad or through Assadâs circle to end Syriaâs misery, the US canât moderate its Syria position until Assad is driven out of Damascus.

Also, Iâm afraid that the key foreign players are reaching the conclusion that the Syrian toothpaste is pretty much out of the tube and a negotiated settlement is just going to be Act I of years of chaos, violence, and misery. Putting Humpty Dumpty together again, in other words, is not a job for all the kingâs horses and all the kingâs men. Itâs a long-term project for Victor Frankenstein, and nobodyâs going to be very happy with the outcome. The overall feeling seems to be to let âer drift (while occasionally berating the Russians and Chinese for not stepping in to fix the mess) and turn to other concerns.

To my mind, Saudi Arabia has looked at this state of affairs and decided that the best policy is one of obstinately supporting the insurrection until Assad is driven out, no matter how protracted and nasty the process is.

I think Saudi Arabia is reacting to the US abdication of leadership to assert its own bloody-minded realist strategy for the Middle East (and, in the process, discredit Qatar as amateur soft power enthusiasts without the belly to do the dirty work needed to neutralize the Iranian challenge).

Perhaps Saudi Arabia is living the neo-con Clean Break dream in reverse. Instead of carrying the fight from Iraq to Syria, and then Iran, as Dick Cheney dreamed, militant Islamists backed by Saudi Arabia (or powerful elements within Saudi Arabia) are closing in on the overthrow of the Assad regime and creating the social, political, and military conditions for an anti-Maliki insurrection in Iraqâs Sunni heartland.

People whose memories of the Iraq debacle go back a few years will not be too surprised to learn that Fallujahâthe bloody and unbeaten heart of the Sunni insurgency against the US occupationâis back in the news.

Take it away, BBC:

Thousands of mourners gathered in the Iraqi city of Fallujah on Saturday at the funerals of Sunni protesters killed by army troops a day earlier.

The funeral processions were followed by renewed protests against Iraq’s Shia-led government.

On Friday, five people were shot dead and dozens more were wounded when the army opened fire on a protest.â¦The army had withdrawn from the city for the funerals, fearing further violence.

But in an apparent revenge attack, gunmen killed two soldiers and abducted three more on the outskirts of the city.

Sunni leaders in Anbar province, where Fallujah is located, had earlier told the BBC that they would attack army positions in the province if the government failed to bring the soldiers responsible for the protester shootings “to justice”.

One must, of course, insert the caveat that local Sunni elites displayed a visceral hostility to Saudi-backed AQ types by teaming with the United States during the famed “Anbar Awakening”. However, it should also be remembered that before partnering with the Americans, local Sunnis had had originally teamed with foreign jihadis in order to stick it to a hostile central administration, a pattern that they might revert to in this situation.

SCMP ran a Reuters picture of the funeral procession that gives an idea of the magnitude of the unrest in Fallujah. 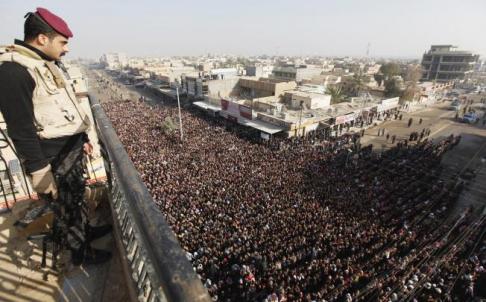 In case one needs a reminder of how the whole cycle of demonstration/repression/martyr/funeral rinse-and-repeat that drove the news cycle in Syria two years ago, Al Jazeera reports:

At the protest, the latest in a series of demonstrations against the government of Nouri al-Maliki, the prime minister, shouts of “Listen Maliki, we are free people” were followed by “Take your lesson from Bashar,” a reference to Bashar al-Assad, president of Syria.

Did I mention, by the way, that a suicide bomber killed 42 people in a Shiâite mosque inside Iraq yesterday?

With the prospect of the chaos in Syria slopping over into Iraq and endangering Malikiâs pro-Iranian administration, I donât think Saudi Arabia is going to be too interested in putting the brakes on Syriaâs headlong rush into collapse.

N.B. In the past I shrank from using the earthy metaphor âeven a blind hog finds a truffle once in awhileâ since it didnât seem to make any sense. Pigs, after all, are employed because of their ability to detect truffles underground by smell. Sight has nothing to do with it. However, TIL that truffles rely on mammals detecting them, eating them, and defecating them in order to spread and reproduce. Therefore, evolution (or the Creator, exercising His/Her/Its prerogative of making everything as bizarre and complicated as possible) selected truffles that emitted smells attractive to animals. Specifically, the truffles valued by gourmets emit an odor analogous to that of the male pig a.k.a. hog sex pheromone, making them an object of interest and pursuit for female pigs a.k.a. sows. That is why truffle pigs are sows. A blind hog (at least one of heterosexual bent) would be doubly disadvantaged in the search for truffles and it would be proper to describe him as uniquely fortunate if he were able to stumble upon one.