When the US destroyer USS Lassen finally executed its Freedom of Navigation sailthrough a.k.a. âThe FONOPâ within 12 miles of Subi Reef on October 27, the China hawks were ecstatic.

John Garnaut exulted that the United States had bested the PRC in a âseminal test of willsâ. On his Twitter feed plugging his piece he speculated that revealing the PLA Navy as a paper porpoise might encourage a rethink on Taiwan:

I wonder about the big prize, Taiwan, now the U.S. has finally called China’s bluff over its fake islands

The thinking here, presumably, is that the FONOP revealed the PRC would back down in any confrontation with resolutely brandished US military force, so the DPP could and should explore those Taiwan-independence scenarios without excessive concern that the PRC is really going to try to fight its way past the US 7th Fleet.

Unfortunately, the assumption that the United States had successfully defied the PRCâs red line in the SCS is a misconception born of some magical combination of goalpost shifting, misunderstanding, and wishful thinking.

Because there was no red line.

The PRC repeatedly declared it would frown upon, indeed not âcondoneâ a US Navy sailthrough that disregarded the (extremely murky) Chinese position on the inviolability of nearshore waters of its faux islands project.

However, it never said it wouldnât allow it.

The PRC current position is that the US, as befits the worldâs only hyperpower, gets to sail where it wants whether the PRC likes it or not. And as long as the keystone of the PLANâs power projection is a converted casino with balky engines masquerading as an aircraft carrier, thatâs how itâs going to be.

In any case, the defiant posture of China hawks was deflated by the revelation that the Lassen sailthrough fell under the heading of âinnocent passageâ i.e. an internationally-accepted hustling of a military vessel from Point A to Point B through some other countryâs seas for purposes of transit only (though âhustlingâ is something of a misnomer here; the Lassen apparently engaged in a âlingeringâ passage of several hours).

Indeed, the US action appeared to recapitulate a Chinese naval flotillaâs âinnocent passageâ sailthrough of US waters in the Aleutians in September.

In order for the Lassen operation to openly repudiate any PRC claims to territorial water rights, it would have had to engage in military operations deemed unacceptable in other countriesâ territorial waters: turn on attack its attack radars, perhaps, or launch a drone or a helicopter, maybe drop some sensors.

But that didnât happen, to the chagrin of proponents of the âFONOPâ. Via twitter, from the feed of an analyst who watches the issue closely:

.@MiraRappHooper & Klein: No certainty about FONOP yet, but innocent passage “worse than having done nothing at all” https://www.lawfareblog.com/what-did-navy-do-south-china-sea â¦

But it was true! Either through leaks of disgruntled hawks or background briefings by the White House to the Financial Times the story came out.

The revelations shrank the mighty FONOP to the puny dimensions of an âinnocent passageâ sailthrough.

According to five people familiar with the operation, the USS Lassen conducted what is known under international law as innocent passage when it sailed within 12 nautical miles of Subi Reef, which could leave the legal significance of the US manoeuvre open to different interpretations.

But that decision angered many Pentagon and Navy officials who think the US should adopt a more forceful stance.

â¦
Some critics suggested that the US operation was no different from when several Chinese warships recently made an innocent passage through waters surrounding the Aleutian Islands off the Alaska coast.

Mr Graham said that while most countries in the region were relieved when the US conducted the Subi operation, a âsense of anticlimaxââ¦

As befits the underpopulated insignificance of these small atolls in a rather large sea, it is very difficult to figure out what is actually going on there. And it would not be beyond the cupidity of various participants to make stuff up.

The administration could just as easily have leaked disinfo that the Lassen had defiantly dropped some sonobuoys and recorded the cries of polyps groaning under the oppression of the Red landfill, and thereby mollified the China hawk quadrant. Instead, theshortcomings of the FONOP were gracelessly and callously revealed.

If the info came courtesy of FONOP fans in order to embarrass the White House, it’s another indication of the borderline insubordination of the Pentagon hawks on the SCS issue and their inclination to try to drive policy execution their way through leaks to the press.

There is another possibility: that the Obama administration was willing to advertise its FONOP dysfunction through backgrounders by not one, not two, but five insiders.

In terms of the White House, there are, I think, a few things at work.

One, obviously, is that President Obama is not too interested in rocking the boat with China right now, what with climate change, cyber, & whatnot on the agenda.

Second, and perhaps less obviously, I suspect President Obama is not too interested in creating additional headaches for himself as he winds down his second term. The âinnocent passageâ FONOP threw a bone to the China hawks at home and abroad, but leaves it up to the next president, presumably Hillary Clinton, the creatrix of the pivot, to decide on the frequency and intensity of these operations over the long term.

Third, and my personal favorite, is perhaps President Obama also shares my opinion that the whole âconfront the PRC in the SCSâ strategy is stupid.

The obvious PRC riposte to enhanced US and ally presence in the SCS is not to resist prematurely; it is to massively muscle up the PRC military presence, not on the exposed islands, but in the Paracels, Hainan, and on the adjacent mainland.

The PRC just deployed J11 fighters to Woody Island in the Paracels, recently completed its aircraft carrier dock at Sanya on Hainan Island (700 meters; big enough for 2 carriers!), and is certainly looking at studding the coast with ship-killing missiles.

Considering the PRCâs geographic and marginal cost advantages in militarizing its backyard vs. the sizable expense of power projection enhancement into the SCS from outside, I leave it to interested strategists to decide whether sustained military superiority by the U.S., Japan, and their allies in the SCS via the pivot is something really worth betting onâ¦

â¦even if the US is able to return to Subic Bay in the Philippines and/or Cam Ranh Bay in Vietnam, prospects that certainly make the Navyâs heart go pitty-pat.

It seems inevitable that eventually the South China Sea will look as inhospitable as the Taiwan Strait, and a confrontation with the PRC over the SCS will require attacks to neutralize PLA capabilities inside PRC sovereign territory, a replay of the AirSeaBattle total war scenario that undoubtedly has fans among the Apocalypse Now! crowd but gives other people the heebie-jeebies.

The FONOP program didnât start this process; but itâs safe to say that it will accelerate the PRCâs militarization of the SCS and move up the day when the PRC finally decides it really is able to circumscribe the activities of the US Navy.

For what itâs worth, I think the South China Sea is not a flashpoint for World War III; instead I see it as the golden trough where PRC, US, Philippine, and Vietnamese militaries expect to glut themselves for a generation.

And if the PRC does finally issue an ultimatum to the United States on the activities of the US Navy in the seas surrounding China, hereâs hoping we wonât be around to see it. Because the PRC will only issue that ultimatum when itâs confident of prevailing, not against the cautious US civilian leadership, but against the China hawks in the US milsec quadrant.

I suggest a useful if not exclusive metric is the carrier race in the West Pacific. The US is shifting the focus of its carrier operations at San Diego westward to support the activities of the Japan-based Seventh Fleet; the PRC is pushing ahead with construction of its first domestically-born carrier with more undoubtedly to come; and Japan is pushing out two ships that masquerade as helicopter carriers but can quickly be converted into conventional aircraft carriers.

If and when the PRC has more aircraft carriers and overall lethal tonnage in the regionalseas than the aggregate of the US, Japan, and any other local ally that wants to pitch in, thatâs when we can expect a hard PRC challenge to the potency of the US Navy. 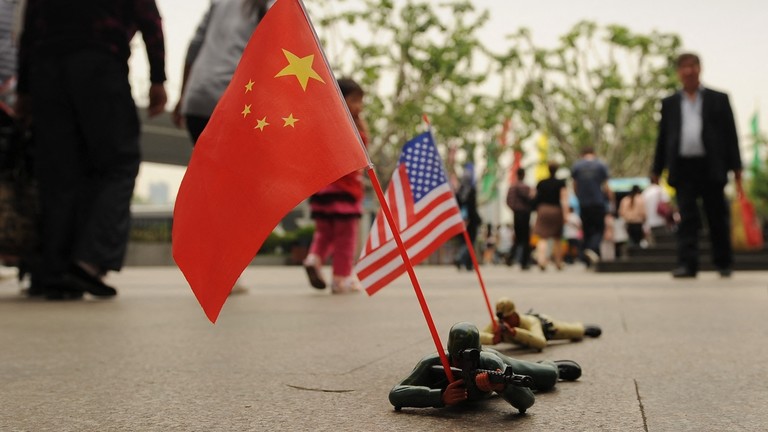 So Are We Doing This War with China or What?
Andrew Anglin
• 364 Comments • Reply
← Open Grave: Western Media Memory Hole P...Paris: Made in Libya, Not Syria →
Hide 5 CommentsLeave a Comment
"Manhood-Measuring FONOP in South China Sea Comes Up Short"
• 5 Comments
Commenters to Ignore
Commenters to ignore (one per line)