I expect the PRC government has a team of spooks and doctors whose main job is to monitor the Dalai Lamaâs public appearances for indications concerning his health. The Dalai Lamaâs April 8 visit to Tawang probably gave them something to chew on, because he didnât look that good to me.

He was mentally acute and spirited, but whenever he walked he was supported by two monks. 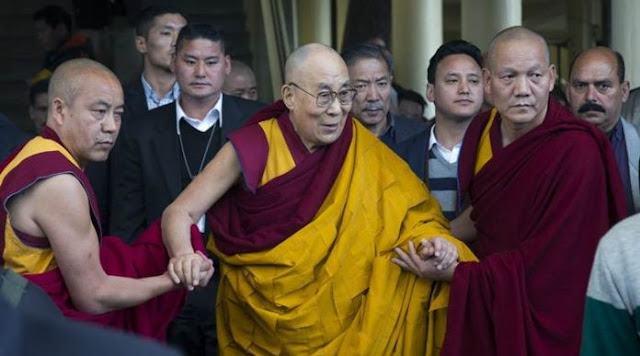 Watching him struggle after he got up from the platform after two hours of religious teaching at Tawang makes me think thereâs more going on than religious deference with the monk escort.

At the 2:33:00 minute point in this video you can see the Dalai Lama wrap up his talk, tuck his meds away in his little carry bag, and exit with some effort.

Last year the Dalai Lama received treatment at the Mayo Clinic for a month, presumably related to his prostate condition which Iâm guessing is more like prostate cancer. It looks to me like his physical condition had deteriorated.

Talking about the Dalai Lamaâs health is an unwelcome subject for the Tibetan diaspora and government in exile, since the CCP strategy is clearly to drag out any engagement until the Dalai Lama passes on, and deal with a position of strength in any talks with his successor.

The Dalai Lama has declared heâs going to live to 90 (heâs now 82), when he’ll finalize the succession issue. Maybe heâs got some supernatural insight, but you have to wonder.

If, as is bruited about, the Dalai Lama chooses the Karmapa of the Karma Kagyu lineage as his successor, the new Dalai Lamaâs clout will also be undercut by the fact that heâs not of the Gelugpa lineage that has dominated Tibetan Buddhist religion and politics for generations. The Karmapa had some of the sheen taken off him by an ugly controversy in which it was claimed he was a pretender and a Chinese Communist mole.

The rough edges have been smoothed off the Karmapa controversy by the death of the alternate claimantâs main champion, Shamar Rinpoche, and a change in attitude by the previously suspicious Indian government and intelligence service. On a broader stage, thereâs a move to redefine Tibetan Buddhism as an ecumenical movement, rather than a congeries of independent-minded and ferociously contentious and occasionally murderous monasteries and religious leaders.

One sign of this was the festooning of Tawang with Buddhist flags for the Dalai Lamaâs visit. The Buddhist flag I am referring to is not the traditional prayer flag but the colorful stripy thing, which is actually a relatively recent innovation. It was announced in Sri Lanka in 1885 with input from an American Buddhist (and Blavatsky Theosophist) enthusiast, Colonel Henry Steele Olcott and is supposed to symbolize the shared essential beliefs and potential for unity for a global Buddhist movement that transcends different traditions and teachings.

As a visual aid: 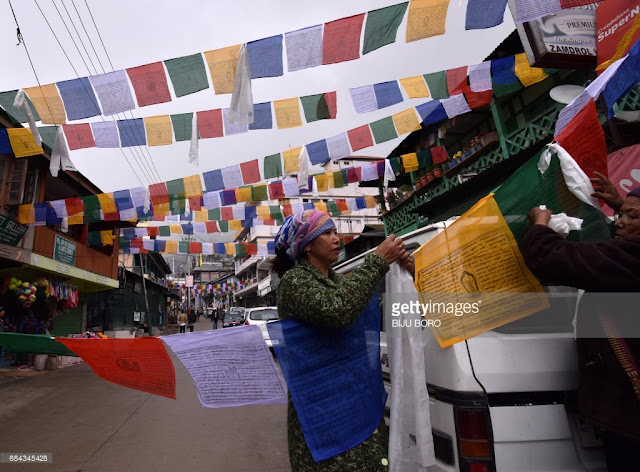 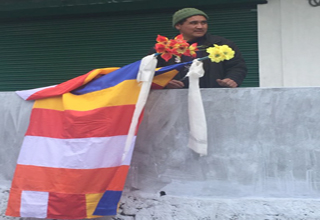 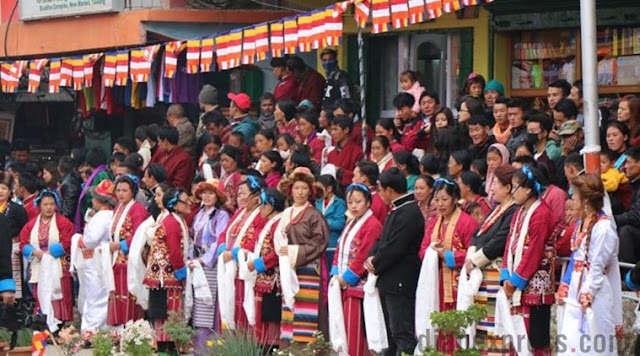 Buddhist, Tibetan, and Indian flags festooning the exterior of the Tawang monastery on the occasion of the Dalai Lamaâs visit, which presumably hacked off the PRC no end: 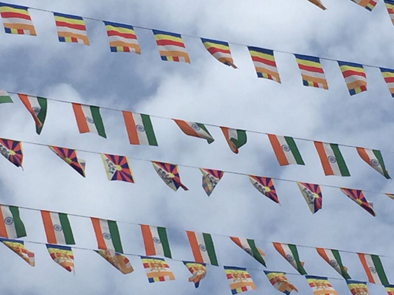 A sign that the âall Buddhists are brothers and sistersâ approach is working is the flourishing of the ecumenically oriented Tibetan Buddhist academy at Larung Gar in Sichuan inside the PRC.

Larung Gar was founded in 1980 by a rinpoche of the Nyingma lineage, but its curriculum also incorporates Gelugpa and other teachings. Perhaps its promise as a unifying, trans-lineage institution for Tibetan Buddhistsâand one less susceptible to the divide-and-conquer strategy China has employed for centuries, most conspicuously in the case of its promotion of the Panchen Lama– is why the PRC government restricts Larung Gar operations and is now tearing down parts of the immense favela of student housing that has grown up around the academy.

Hereâs my most recent video for Newsbud, where I discuss the Dalai Lamaâs visit to Tawang (and Xi Jinpingâs visit to Mar a Lago!) and conclude that the next Dalai Lama will probably turn out to be more of brand ambassador for Tibetan Buddhism, a Dalai Lama Lite, rather than a galvanizing figure like the 14th Dalai Lama.

In my video, I mis-state the dessert that witnessed Donald Trump’s announcement to Xi Jinping that he was pasting Syria with cruise missiles as “chocolate sorbet”. It was actually “the most beautiful piece of chocolate cake.” Global South: Gold-Backed Currencies to Replace the US Dollar
Pepe Escobar
• 143 Comments • Reply
← Ratf*Ck A Go Go! Atlanticists and MI5 G...Invasion of the Pretty People, Kamala H... →
Hide 26 CommentsLeave a Comment
"How Sick Is the Dalai Lama?"
• 26 Comments
Commenters to Ignore
Commenters to ignore (one per line)