Prime Minister Abe was compelled to get into Chinaâs grill about the Senkakus dispute in a Washington Post interview setting the table for his meeting with President Obama, claiming the PRC had a âdeeply ingrainedâ need to challenge neighbors over territory.

The PRC’s Ministry of Foreign Affairs laid into Abe:

âIt is rare that a countryâs leader brazenly distorts facts, attacks its neighbor and instigates antagonism between regional countries,â Chinese Foreign Ministry spokesman Hong Lei said. âSuch behavior goes against the will of the international community. .â.â. We have solemnly demanded the Japanese side immediately clarify and explain.â

Peopleâs Daily ran with the ball under the heading âHow Japan Misleads the USâ, proving that the PRC will not hesitate to take offense any time Japan makes an overt play for US strategic support against Chinaâand will avoid criticizing the US on the issue in order to work the wedge between Tokyo and Washington a little deeper.

I thought this might be a piece of ingenious Chinese self-consolation a.k.a. a lie, but it was true! as the WaPo confirmed in an article titled Japan says Abe’s quotes about China in Post interview were ‘misleading’:

âThere is no comment made by the prime minister as saying that China wants to clash or [have] collision with other countries,â Chief Cabinet Secretary Yoshihide Suga said. âAs I said, as the prime minister said, we value mutually beneficial relations with China based on strategic interests.â

The United States is unlikely to be impressed by the Japanese governmentâs transparent desire to present itself to the US as the unshakable axis of the pivot, while rather abjectly backpedaling vis a vis the PRC. Also, the prominent play that the Washington Post gave to this embarrassing story seems indicative of the bemused contempt with which the Obama administration regards the seemingly endless parade of Japanese prime ministers that it has witnessed over the last five years.

As long as Abe is going to try to play the pivot card, no matter how haltingly, the PRC will be happy for an additional excuse to grind away at Japanâs economic and political resolve, Sino-Japanese reset be damned.

Iâm not particularly interested in the Senkakus. By geographic logic, Iâd say they belong to Taiwan.

Here, courtesy of Wikipedia, is a map showing where the Senkakus/Tiaoyutai/Diaoyutai Islands are. 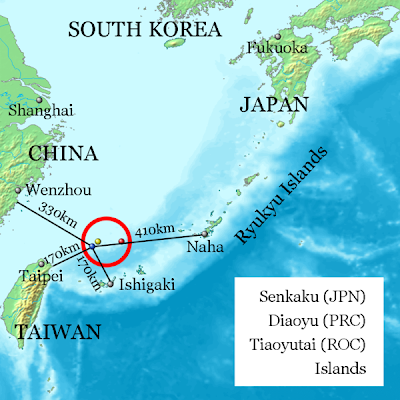 They are close to Taiwan and only close to Japan if one ignores the immense distance between them and the Japanese mainland and concentrates on some tiny islands in the Ryukyu chain instead.

This map doesn’t show it so clearly, but the islands are comfortably on the Eurasian continental shelf, and are separated from their purported Japanese brothers in the Ryukyu chain by the Okinawa Trough.

As Wikipedia tells us, the Senkaku contretemps therefore requires that the identity of the Okinawa Trough itself be put into play:

The existence of the Okinawa Trough complicates descriptive issues in the East China Sea. According to Professor Ji Guoxing of the Asia-Pacific Department at Shanghai Institute for International Studies,

China’s interpretation of the geography is that”…the Okinawa Trough proves that the continental shelves of China and Japan are not connected, that the Trough serves as the boundary between them, and that the Trough should not be ignored ….”

Japan’s interpretation of the geography is that “…the trough is just an incidental depression in a continuous continental margin between the two countries … and that any legal effect of the trough should be ignored ….”

Enthusiasts for ambiguity will be overjoyed to learn that the truth is somewhere in between! as can be gleaned from Okinawa Trough: Origin of a Back Arc Basin, a joint study of the seismic and magnetic characteristics of the geology of the trough by US and Taiwanese oceanographers.

The rock composing the bed of the Okinawa Trough is originally continental crust, so score one for Japan!

However, the Okinawa Trough itself was formed by ongoing, violent geologic action associated with the subduction (descent) of the Pacific oceanic plate into the Ryukyu Trench on the east side of the Ryukyu Islands. The heat and ruckus associated with the melting of billions of tons of oceanic basalt bowed up the continental crust into an arc, which then collapsed into the Okinawa back arc or trough.

This action was accompanied by the shattering of the continental crust structure of the local seabed, and intrusion into the seabed of the Okinawa trough of igneous rock melted off the Pacific plate as it disappeared into the earth’s crust.

As a result of the igneous upwelling, the Okinawa Trough seafloor is not stable as befits a hunk of continental crust that happens to be underwater. Instead, it is exhibiting the spreading effect characteristic of ocean basins, an effect which is continuing to this day, giving the Okinawa Trough an ever more dominant character as a dynamic, basaltic seabed as more of the melted Pacific plate wells up into it.

So the Okinawa Trough represents the border of the Eurasian continental shelf and the beginning of a transition zone of violent, high-speed geologic events associated with the Pacific plate’s subduction and the creation of the Ryukyu Islands out of volcanic activity, leaving the Senkakus by themselves on the continental shelf i.e. Chinese side of the equation.

So score one for China!

But some of the Senkakus are also volcanic, presumably created by localized upwelling from the Ryukyu Trench subduction process…and some are “rocky outcroppings”.

Call it a tie!

China took the step of claiming the Senkakus as part of the PRC’s continental shelf propers in a report filed with the UN’s Law of the Sea treaty organization.

Japan apparently thinks that China has the geographic upper hand, as it has asked the UN not to rule on China’s submission, as Reuters reported in January:

In a letter to the commission, Japan’s U.N. mission argued that China’s submission should not be considered.

Embarrassing for Japan, which has few claims to the Senkakus on the basis of propinquity, geology, or history, and has to rest its case based upon the acquisition of the islands during the less-than-fondly recalled extension of the Rising Sun brand into East Asia during the 1895-1945 period and the somewhat muddled circumstances of their retention when the Japanese empire was dismantled–and for the argument that China has no defensible claim on the Senkakus and therefore never attempts to advance them in international venues.

Nevertheless, historical, geographic, and geologic claims butter no parsnips when it comes to the hot-button principle of sovereignty.

I hold the distinctly minority view that principles, be they moral, legal, or geographic, should have no place in the Senkaku issue.

On principle, the PRC is determined to make Japan pay the maximum possible price for standing on principle to defend its claim to the Senkakus. So far, standing on principle has gained nothing for China, Japan, or the region other than contributing to a state of polarization that is extremely gratifying to proponents of simple-minded hairy-chested nationalism and to the guardians of US, Chinese, and Japanese defense budgets but is of little use to anyone who cares about peace and prosperity. I suggest that, if China and Japan canât agree on the Senkakus, they find something else they can agree on.

So can everybody just shut up about the Senkakus, already?

Unless we’re talking about their interesting geology, of course…

Truth About Tanks: How NATO Lied Its Way to Disaster in Ukraine
Scott Ritter
• 52 Comments • Reply