Stephen J. Sniegoskiâs The Transparent Cabal would be the book of the year in a less manipulated society than our own. I suggest as much in my introduction; and former Congressman Paul Findley, who wrote the foreword, lavishes equally high praise on this monument to diligence. Almost as interesting as the bookâs content are certain facts about it: for example, that the only publisher the author could find was the far rightwing Catholic IHS, and that political magazines, including âconservativeâ ones professing to be critical of our invasion of Iraq, would not touch Steveâs work with a ten-foot pole.

The question has occurred to me why the attack on AIPAC by J. J. Mearsheimer and Stephen Walt made a prodigious media splash, while Sniegoskiâs study, although it is selling well, has trouble finding reviewers. As I point out in my introductory comments, Steveâs monograph revisits some of the same themes as the earlier work, and it is also better focused. Unlike Mearsheimer-Walt, this criticism of American Zionists seems consistently packed with evidence, and, unlike the earlier study, it does not engage in vapid moralizing about how nice our foreign policy would be if AIPAC buzzed off and if all the âright-wingersâ took a powder. 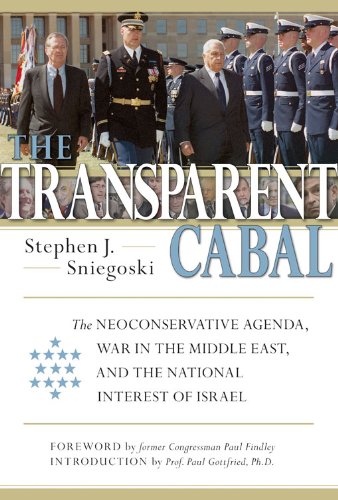 It is furthermore astonishing how this book has elicited such vitriol on Amazon, causing one AIPAC defender, who also admires the âwisdomâ and âpatriotismâ of our neoconservative ruling class, to compare Steve to the Nazis. This of course is not the only opinion thus far registered about the book. His publisher has complained that Steve is excessively moderate in his comments about the American war in Iraq.

Unlike Mearsheimer and Walt, who bestride our foreign policy establishment, holding forth from University of Chicago and Harvard, Sniegoski is not an establishment player. Now over sixty and having spent his entire career in the bowels of the federal bureaucracy, as a research assistant and librarian, his career typifies the fate of paleoconservatives who are silly enough to envisage an academic career. Such people, as Steveâs life amply demonstrates, should heed Oswald Spenglerâs advice (given in the 1920s) to the rising generation of young Germans, to go into engineering and commerce rather than the arts and philosophy.

Since having received at PhD in history at the University of Maryland in 1977, Steve has always had a thing for research. Over the years, he has accumulated piles of facts and quotations about those who have shaped and sold American foreign policy. For those who are dumping the review copies of his book because of his non-mainstream publisher or because of the authorâs insufficiently liberal-neocon establishment credentials, I would urge them to take a second look. There is nothing cranky about his work, which has much to teach the reader.

Despite the mention of Israel in the subtitle, this book is not for the most part about the machinations of Israeli politicians. It focuses on a particular group of Zionist superhawks in the U.S., who sometimes try to anticipate the wishes of the Israeli government but who at least as often do what pleases them. That is because the neoconservatives, those members of the pro-Zionist liberal establishment who now dictate foreign policy to the GOP, are in a powerful position. The war of choice against Iraq, according to Sniegoski, was not something the neocons simply concocted after 9/11. Nor was W the only chief executive whom Richard Perle, Douglas Feith, Paul Wolfowitz, and the other neocon insiders had been willing to sell their war plan to. They had been planning their offensive war since the 1990s, when they concluded after the first Iraqi war that the failure of Bush the Elder to topple the regime of Saddam Hussein had left intact a grave threat to Israel. They then coordinated their plan periodically with sympathetic politicians in Israel as well as in the US, until it became possible to put it into operation in 2002. The plan also goes back to the thinking that had motivated the Iran/Contra debacle in 1986, when Elliot Abrams and other neocon advisors to Reagan, using the perpetually warlike Ollie North as their pawn, had tried to provide the Iranian government with loads of arms. The thinking at the time, put forth by the AEI luminary Michael Ledeen, was that the U.S. should be leaning heavily toward the Iranians, against their Iraqi enemies. We would be following the Israelis, who had decided that Iraq, and not the Ayatollahâs Iran, was Israelâs primary enemy in the region. The arms plan also called for providing other supplies to the anti-Communist Contras, who were then fighting the Nicaraguan Sandinistas. This distribution of arms would give the complicated scheme a certain apparent merit within the context of prosecuting the Cold War. Within this covert operation, one could discover an idea that was then common to the Israeli government and the neocons, namely that since the Israelis had ceased to regard the Iranians as their chief enemies and had assigned this role to Iraq and its ruler Saddam Hussein, the U.S. should likewise support Iran against Iraq. At the time, I could not grasp what exactly were the âAmerican security reasonsâ that required us to make this switch, so soon after the Iranian hostage incident had occurred and while there were still vicious, daily attacks on âAmerican infidelsâ coming from the Iranian Mullahs. Sniegoski not only clarifies this move but explains how it was a preliminary stage to getting the American government to launch a full-scale attack on Iraq.

The Transparent Cabal showers its reader with a wealth of details, which are available in the footnotes as well as in his text. The book is not pleasant reading, although probably not more unpleasant to read than The Israeli Lobby in US Foreign Policy, and it is also a lot more informative. In his narrative, Sniegoski throws light on the intricacies of neoconservative relations, which even I, perhaps the worldâs foremost authority on this world-historical misfortune, did not know until I read Steveâs galleys. For example, I discovered there the pivotal role played by the professor of nuclear war, Albert Wohlstetter, who prepared young neocon âforeign policy experts.â A City College of New York graduate and World War II bureaucrat who subsequently landed up teaching international relations at that Straussian redoubt the University of Chicago, Wohlstetter had Paul Wolfowitz as both a graduate student and dissertation charge. He also exerted influence on the young Richard Perle, when Wohlstetter was teaching at UCLA and when Perle was attending high school in nearby Hollywood. Perle dated Wohlstetterâs daughter but Sniegoski suggests that may have been a pretext designed to ingratiate him with the father, who was already a major Cold War liberal advisor to Democratic presidents. In Wohlstetter, Perle and Wolfowitz found someone who prefigured their own concerns: pushing Wilsonian ideals abroad, the construction of a welfare state at home, and the politics of the Israeli Right whenever and wherever they could.

Sniegoski depends largely on sources that are widely available to even minimally literate adults; and he does this, as he makes clear, because he does not intend to pull any rabbits out of the hat. If his readers had been looking at the national press, as closely as he had, over the last thirty years, with an eye toward certain details, they would have discovered the facts he is now providing. The cabal Sniegoski looks into is âtransparentâ in two senses: One, readers could easily have picked it up if they had bothered to examine the available sources; and two, although those in control of the media knew the âcabalâ was there, they decided not to make a fuss about it. That is because those who control the public conversation about such matters are more sympathetic to the war-planners than they are to those who read this website.

Moreover many rank-and-file Republicans have had their brains so laundered by neocon advisors and journalists that they see the âunpatriotic Rightâ in anyone who disputes the neoconservativesâ proclaimed truths. That is why a friend of mine, Philippe Simennot, who teaches economics at the Sorbonne, is mistaken when he believes that Steveâs Sniegoskiâs work is going to have a significant influence on American public opinion. I suspect this text will have none. That is because the usual people remain in charge of the discussion, and to whatever extent they are willing to broach certain delicate questions about the mischief wrought by the neoconservatives, it must be done on their terms, without involving our side.

A final disclaimer may be necessary lest I be attacked for something I am not. I do not believe the âtransparent cabalâ is the work of that old anti-Semitic standby, international Jewry (nor does Steve Sniegoski). In fact there is no reason to think that most Jews even know this cabal exists. Nor I am I indicting most Israelis or the present government of Israel for what the neocons have been able to get away with in this country. I have also never denied that the overwhelming majority of neocon enablers are Christians and that many of them are found in the GOP. One reason neocons have been able to sow so much mischief is that they feed into deeply embedded American beliefs about democratism and âchosenness.â Their success points to weaknesses in American character that they have been able to exploit, because they are almost impossible to root out.

But in addition to these factors, one must take into account that the liberal media and liberal foreign-policy establishment are squishy soft on neocon journalists and propagandists, and whether we are taking about the New York Times or Washington Post, the liberal media have consistently provided their esteemed opposition with a forum. And one would have to be blind not to notice that sociologically and culturally neocon and liberal journalists are indistinguishable, whether or not they are Jews whose ancestors arrived from Eastern Europe and then settled in the same Eastern cities in the same time period. David Frum, Bill Kristol, and Jonah Goldberg all fit together like peas in a pod with their liberal debating partners (in a way that Sarah Palin does not.) And Sniegoski is on the money when he suggests that the hyper-Zionism and other peculiarities of the neocon intellectuals are not entirely disagreeable to liberals, who are willing to cut them a break because they are often equally paranoid about the same things. Liberals, and especially Jewish ones, have the same quirks and most of the same dislikes as do the neocons but in larger quantities. Therefore they would never allow our side to get a glove on their budsâand if we do so somewhere out of public view, they will make sure the public never notices.