The following text was delivered at a rally in defense of the Tenth Amendment, held at the statehouse in Harrisburg, Pennsylvania on March 16, 2009 and organized by Representative Samuel Rohrer. The rally was well attended and the hundreds of people who crowded the rotunda, and who were shown on TV, carried such signs as âGive Us Back States Rights!â and âGuns and Property.â Never has this author seen such an exuberant outpouring of what has been described as the âAlternative Right.â These were the members of the true conservative movement, who would never be invited on to FOX news or asked to write for National Review or the New York Times. In short, they are the real Right, which the media have worked energetically to keep out of view. May their number increase!

It might seem to some that our gathering today looks like an exercise in futility. Why should we bother to pay honor to an amendment that our courts, legislatures, and public administrators usually ignore or treat as mere decorative language? And why bother to remind the states, which now beg for federal grants and which run to conform to federal mandates, that the states under our founding document share with the federal branches a real right to govern? Certainly most of our states, the Commonwealth of Pennsylvania included, have no desire to take back those âpowers not delegated to the United States by the Constitution nor prohibited to the States,â because, put most plainly, our states have become cringingly subservient to Washington. I for one would be delighted if there were a level of government which would be willing to stand in the way of the expansion of federal power. That of course assumes that our states and their people still believed in our original constitutional principles. 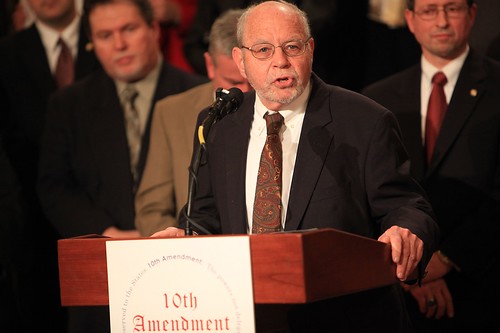 As it turns out, however, the Founders did not indicate any level of government except for the states, as a partner in their plan for shared sovereignty. Whether we like it or not, it is the states, as indicated in the Tenth Amendment and in the original articles of the Constitution, with which the federal executive and federal legislative are meant to co-govern. Therefore those who of us shudder with horror at todayâs centralized public administration need the states as the only constitutionally authorized bulwark against the consolidation of federal control. Even if most voters donât care about this centralization, those of us who do have a duty to call attention to those limits placed on federal power under our Constitution. Needless to say, if those limits were fully abolished, most of my fellow-academics would be rejoicing in the streets, providing that those like themselves were running the show. A constitution that allows progressive intellectuals to socialize the rest of us from a single center of power is one that they would surely welcome.

But this development would occur against everything the founders believed would result from their project in self-government. They assumed that the influence of the state governments would remain stronger than that of the central regime. Since the existence of the national government originally depended on state legislatures, to elect presidents and senators, and since âthe powers of the national government are few and defined,â as explained in Federalist 45, the Constitutionâs authors believed that Americans would look first to the states in order to protect the âlives, liberty, and property of the people.â

Clearly these constitutional architects did not foresee a time when states would become the mere creatures of federal power. Nor did they imagine that it would someday be necessary to push state governments into requesting the return of their original right to self-government. Least of all, could they have dreamt that American citizens would be gathering at some future time to insist that the states act like independent agents in relation to a federal bureaucracy that has no constitutional standing whatever. It is doubtful that our being here today will get things back to where they should be. But it can serve as a reminder that weâve noticed how badly our constitution has strayed. This has occurred with the tacit approval of a shamefully passive or indifferent public. It has further involved a political class that, with some exceptions, such as those who invited me here to speak, is all too eager to take charge of our lives and liberty. It is also the class that continues to help themselves to our property, the very institution that, according to the founders, American citizens would look to the states to protect. BALLOON DOWN! Beijing Biden Caves to Pressure and Bucks His Masters, Shoots Down Balloon!
Andrew Anglin
• 221 Comments • Reply
← Re: Frumbag & the BlowhardThe Last Word on Legalization →
Current Commenter
says:
Current Date at Time Now
Leave a Reply - Comments on articles more than two weeks old will be judged much more strictly on quality and tone
Cancel Reply
Commenting Disabled While in Translation Mode