A review of The Land We Love: The South and Its Heritage (Scuppernong Press, 2018) by Boyd Cathey

I must confess that I feel a bit awkward about reviewing Dr. Boyd Catheyâs outstanding anthology, The Land We Love: The South and its Heritage. I am, as the reader may notice, mentioned in the preface, along with Clyde Wilson, as one of the authorâs two most significant guides in preparing these essays. And despite the fact that unlike Clyde I didnât write the foreword, I do appear with this eminent Southern historian on the back cover, as one of several bloggers praising the many fine qualities of Dr. Catheyâs work. 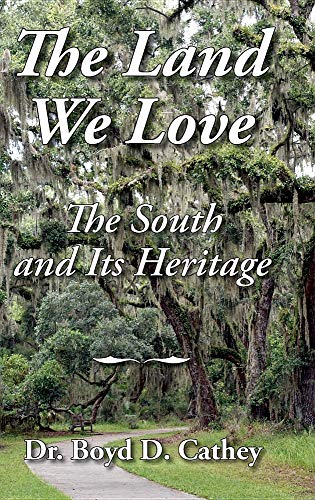 Notwithstanding my obvious conflict of interests, I did volunteer to review the book because it illustrates an observation that Iâve been making for the last forty years, namely, the most provocative writers for the onetime American conservative movement have been generally Southerners. Moreover, whatâs rendered them worth reading is that their perspective is unlike the one that has prevailed elsewhere in the US. Southern conservatives wrote and still do, if this book is any indication, with a tragic sense born of defeat, an ingrained sense of place, and an appreciation for older, European conservative traditions.

The Southerners to whom Iâm referring were and, remain even now despite their reduced numbers, the most relentlessly principled conservatives of my acquaintance. They conspicuously refused to bend their knee when the neoconservatives took over the establishment Right in the 1980s. Like Clyde and Boyd, they paid for their defiance by being marginalized by what Clyde mockingly described in 1986 as the âinterlopers.â But significantly the true Southerners whom the movementâs hired hands expelled, never changed their stripes and still show contentiousness as well as a deep sense of honor. Anyone who surveys the titles of Boydâs essays, e.g., âA New Reconstruction: The Renewed Assault on Southern Heritage,â âHow the Neoconservatives Destroyed Southern Conservatism,â âHow You Stand on the War Between the States: A Window into your View of the Western Christian Heritage,â and âMerchants of Hate: Morris Dees, the Southern Poverty Law Center, and the Attack on the Southern Heritage,â knows that the author has come to fight. He does so in essay after essay, attacking the SPLC as âmerchants of hate,â exposing its longtime head Morris Dees as a corrupt profiteer playing on usually baseless fears about âextremism,â and assailing the various detractors of the Southern cause.

Although the anthology under review covers other worthwhile themes, there are two topics on which Iâd like to focus. One, the author recognizes genuine conservatism, the presence of which he points out in his subjects. Presbyterian theologian and political theorist Robert Lewis Dabney, Southern literary scholar M.E. Bradford, the Agrarians, US Senator Nathaniel Macon of North Carolina, Robert E. Lee and Jefferson Davis are all cited as representing a well-defined conservative worldview. A sense of place, reverence for oneâs ancestors, deep reservations about an expanding commercial society because of the cultural change that follows in its wake, resistance to administrative centralization and an unbending principle of honor are all conservative characteristics stressed in this anthology.

A worldview enriched by these elements seems so imprinted in the conservatives under discussion that they could not have acted in any way that contradicted who they were. Thus Lee felt compelled to resign his commission in the Union Army and to defend his beloved state against invasion by the federal forces. He was first a son of Virginia, born to its first family, and then only a citizen of a larger political entity. Dr. Cathey cites Jefferson Davis, addressing the Mississippi legislature in 1881 and telling its members that despite âall that my country was to suffer, all that our posterity was to endure, I would do it all over again.â Despite all the suffering that Southern secession brought his region and him personally, Davis did not regret his struggle for Southern independence, because he thought it was a just (and constitutional) course.

Dr. Cathey has observed a conceptual parallel between those Spanish aristocrats and legitimists he has studied (and indeed written a dissertation on) and Robert Lewis Dabney, the stern Virginia Calvinist who ended his life in Texas. Like the great historian of the American South, Eugene G. Genovese, Dr. Cathey views Dabney as the full-package for those who are looking for a prototypical man of the traditional Right. Dabney was a defender of fixed gender distinctions and viewed the idea that women should vote as being laughable, perverse or possibly both. Dabney regarded universal suffrage as a monstrous conceit: although all members of a political society âbear an equitable relation to each other, they have very different natural rights and duties.â

Further: âjust government is not founded on the consent of the individuals governed, but on the ordinance of God, and hence a share in the ruling franchise is not a natural right at all, but a privilege to be bestowed according to a wise discretion on a limited class having qualifications to use it for the good of the whole.â Dabney also vocally opposed the introduction of free public education in Virginia in the 1870s. He considered such an enterprise to be an attempt by the state to supersede the authority of parents and the family. If the proposed reform took place, Dabney feared, the government of Virginia would be engaging in a âleveling actionâ âcountervailing the legislation of nature.â In such a measure Dabney discerned the early stages of what would later be called âsocial engineering.â

Dr. Cathey never states (nor would I) that a conservative worldview provides the only path to understanding social or political relations. What he does indicate repeatedly in his essays is that advocates of gay marriage, feminism, and massive government interference in the family are most definitely not âconservative,â even if they happen to be involved in the questionable media operation that goes by that name. He also revives the debate that the late M.E. Bradford, âarguably the finest historian and philosopher produced by the Southâ had with the Lincoln admirer Harry V. Jaffa on the pages of Modern Age in the 1970s. Bradford fiercely resisted Jaffaâs notion of America as a propositional nation founded on the overarching principle that âall men are created equal.â

Unlike Jaffa, who celebrated Lincolnâs crusade against slavery in the American South as a vindication of what was supposedly our foundational belief in universal equality, Bradford defended the social and cultural particularities of his region, and above all its right not to be invaded and reconstructed. Behind this debate, in my view as well as in Dr. Cathyâs, was Bradfordâs defense and Jaffaâs rejection of the âinherited traditionsâ of Southern society and the strict constitutional republicanism on which the Southâs relation to the federal union was based. Equally relevant was Bradfordâs obvious contempt âfor the abstraction equalityâ and for the imperative to which it led among our political and journalistic elites to âimpose our democracy and equality on the rest of the world.â

Dr. Cathey is right to perceive here a foreshadowing of the contention that later erupted between paleoconservatives and neoconservatives over a wide variety of questions. Although the followers of Jaffa, known as the West Coast Straussians (and named for Jaffaâs teacher Leo Strauss) are not necessarily the same as neoconservatives (Jaffaites tend to be much brainier), most of their ideas about the US as a propositional nation bottomed on the ideal of equality became neocon agitprop. The two groups, which Dr. Cathey treats as almost interchangeable, write for the same journals and attend the same conferences. Hillsdale College, which is run by a West Coast Straussian president Larry Arnn, rolls out the carpet for neoconservative but never paleoconservative speakers. In 2016 Boyd Cathey and I both had our names removed from a declaration of support for candidate Trump then running for president. It was a Jaffaite website that took this step. Needless to say, neoconservative names abounded on that declaration from which our names were removed. The reason for our shaming may have to do with the sides that were taken over the controversy between Bradford and Jaffa in the 1970s. The Jaffaites likely never forgave those who contemptuously dismissed the sacred doctrines of their teacher and who rallied almost instinctively to Bradford.

Two, Dr. Cathey devotes several commentaries to one especially dismal aspect of current white Southern political behavior, namely, the unwillingness of most Southerners, even the ones who are descended from gallant Confederate warriors, to rise to the defense of their ancestral monuments and memorials. Right now our author is deep into a legal struggle to keep the statue known as Silent Sam from being removed from the University of North Carolina campus. Dr. Cathey continues to be amazed at the reluctance of Republican politicians (who claim intermittently to be âconservativeâ) to keep Confederate monument from being dismantled. He quotes a commentary of mine that was posted on Daily Caller, contrasting the indignant response of Italian Americans to the efforts of the cultural Left to remove a statue of Columbus in Manhattan to the appalling indifference of many, perhaps most Southerners to the removal and defacing of their ancestral monuments. Note that many Southerners have a true ancestral connection to what theyâve turned their backs on. Like Dr. Cathey who mentions in his dedications two great-grandfathers and one great-great-grandfather who fought for Southern Independence, these self-hating Southerners have heroic ancestors whom they can celebrate. Instead they work to denude the South of its heritage or sit on their hands while others do the desecrating.

We should finally note that Italian Americans have much less of a familial stake in preserving Columbusâs monuments and reputation than Southerners have in the heritage theyâre now denying. The figure whom Italian Americans (most of whom are descended from immigrants from Southern Italy or Sicily) are honoring, has only a very distant relationship to them. He was a Genoese, probably of Sephardic descent, who sailed to Central America under a Spanish flag. Columbus for his celebrants is a symbol of their ethnic identity and group pride, but perhaps not much more. Lee, Jackson, and Forrest should mean much more to Southerners who have lived in their region for at least several generations. These were the commanders under whom their ancestors fought for regional independence, while Jefferson Davis was the honorable president under whom these ancestors served.

Paul Gottfried is the president of the H.L. Mencken Club, a prolific author and social critic, and emeritus professor of humanities at Elizabethtown College. American Exceptionalism, the South and the Brain Robbery of Conservatism
Boyd D. Cathey
• 71 Comments • Reply
← Charlottesville After A YearâAs An Ou...Joe Scotchie: Recovering Authentic (= P... →
Hide 260 CommentsLeave a Comment
"The Defense of Southern Conservatism"
• 260 Comments
Commenters to Ignore
Commenters to ignore (one per line)