What may be a declining force in American political life is the Tea Party movement, which in 2010 played a critical role in winning congressional seats and governorships for the economically conservative wing of the GOP. Since then, national support for this loosely organized movement has fallen precipitously. Between March 2010 and April 2011, according to Pew polls, disapproval for the Tea Party rose by 19%, while only 21 % expressed positive views about it. 49% of those polled held no opinion on the subject and were not even motivated to inquire. At the same time, support for Occupy Wall Street movement has held steady at 21% and is now almost equal to the popularity of its right-of-center competitor.

There are several factors that make these findings curious. One, the Tea Party has obviously declined in its confrontational relation to the two-party establishment since 2010. For the last several months Tea Party leaders Senator Jim DeMint and Governor Nikki Haley in South Carolina, Governor Chris Christie in New Jersey, Governor Janice Brewer in Arizona, and Congressman Paul Ryan in Wisconsin have been piling on to the Mitt Romney bandwagon, and self-identified Tea Party sympathizers have been doing the same in primaries in Florida, Colorado, Illinois, and Pennsylvania. Their support for the quintessential small-government candidate Ron Paul has been minimal, which should not be surprising. We are talking here primarily about Bush-McCain Republicans, who went on the attack against Democratic spending, and particularly against Obamacare, after the 2008 election. Tea Party demonstrators were mostly, according to polls, high on Medicare, which many of them are receiving, and have no desire to play around with entitlements. They are mostly objecting to Obamaâs expansion of government spending.

Two, the fact that Occupy Wall Street and Tea Party levels of popularity are roughly equal has nothing to do with how the two groups have behaved. Although the Tea Party rallies probably drew larger participation, the Anti-Wall Street demonstrators have been much more riotous. While the former made speeches and then went home, the latter took over entire parks and public squares in major and middle-sized cities and then camped out for months. They hectored passers by, made lots of noise and littered streets with debris. In Philadelphia and New York there were reports of violence and even rapes in Anti-Wall Street occupied areas; and in Oakland there was a standoff between demonstrators, who refused to vacate the downtown area, and the police.

This confrontation occurred in what may the most leftist city in the US. There is also an unsettling vagueness in what the demonstrators are calling for, beyond government control of corporations and free college education for everyone who wants to attend universities. Yet roughly the same percentage of Americans approves of this group as do those who identify with the less radical, more mainstream Tea Party.

The reason seems apparent. While the Tea Party stands for the GOP with budget-reductions, at least while the Democrats are in power, the Occupy movement represents cataclysmic change. It is the American precursor of what is happening in France, Greece, and elsewhere in Europe, where the public sector dominates political life. In France a fake conservative administration is about to fall to a Socialist one that promises to subsidize more teachers and expand public sector employment– and will pay for these extravagance by soaking the rich. In Greece the situation is even worse. EU subsidies there were lavished on increased public employments and added pensions; then riots occurred when the EU asked for repayment on its loans. In the US, we are assured by the media, President Obama is trying his best to shake down the rich, but he may not be doing enough to please millions of Americans. Like the Occupy Wall Street demonstrators, they want to end âeconomic inequalityâ by confiscating wealth and then having the government redistribute it to them.

Bread and the games will indeed be supplied but not much more can be taken from the rich, without drying up our investment sources. And Obama will not pay for the goodies that the public wants by creating real jobs. Like his Republican predecessor he will finance our appetites by convincing the Chinese to buy up our debts. This has been going on for years, and heaven save us if the Chinese ask for the money back. (Out of our national debt of \$15.7 trillion, the Chinese are holding \$2 trillion.)

It seems likely the power of public sector unions will continue to grow; and if this interest remains linked to other protests, for example, demanding amnesty for illegal immigrants, the Occupy movement will be only the rough beginning of what awaits us. By comparison the Tea Party demonstrators are weak tea indeed. They have all the extremism of senior citizens attending a church social gathering. 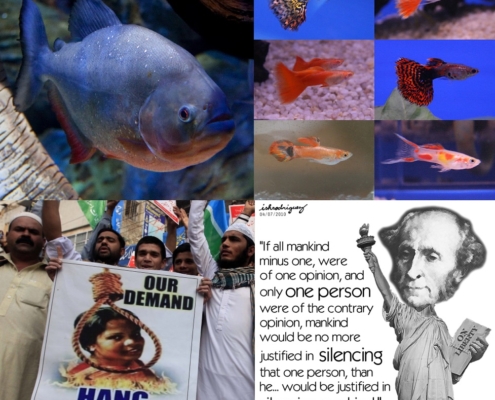 Why Are Americans Getting Stupider? What the Jewish-Controlled US Has in Common with North Korea
Jung-Freud
• 101 Comments • Reply
← Human Rights: the Useless FictionEuropeâs Composer →
Hide 18 CommentsLeave a Comment
"Tea Party vs. Occupy: Which Is Winning?"
• 18 Comments
Commenters to Ignore
Commenters to ignore (one per line)