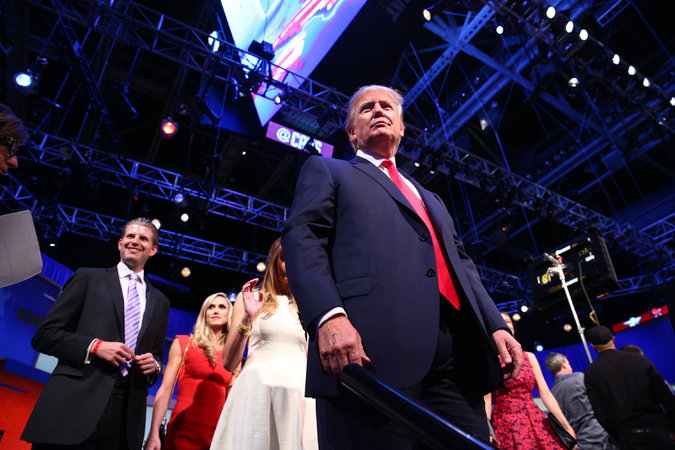 A young friend, who might be described as a journalist of the very independent Right (consisting largely of himself) just emailed to complain about how thoroughly boring he found the GOP talk fest in Cleveland last Thursday. I wrote back explaining that because of his callow youth (he is only 22) he doesnât know what a boring presidential debate sounds like. He should have been alive and sentient in 1976, to hear the âexchange of viewsâ (thatâs what it was called then) between the tongue-tied presidential incumbent Jerry Ford and the Peanut Farmer with the quasi-Southern twang Jimmy Carter. That televised gas session gave boredom a new meaning! The two contenders droned on about nothing for what seemed several hours, and it was hard to figure out what they were supposed to be disagreeing about. The only surprising statement that night came when Ford maintained that (then Soviet-occupied) Poland was âindependent.â I donât recall having heard that unsettling remark because by then I and most of those who had foregathered in a friendâs den to watch this ordeal, had fallen mercifully asleep.

In contrast to that verbal torture, the debate (if thatâs what it was supposed to be) last Thursday among the ten highest polling Republican presidential candidates was first-rate drama. Most of the candidates seem to have been carefully scripted and unlike their counterparts in the past, spoke grammatically and avoided dangling participles. None of them said anything to upset their donors; and one suspects that Sheldon Adelson, the Koch Brothers and the other fat-cat benefactors of those verbalizing on stage got their moneyâs worth. In the earlier sideshow for the less popular candidates, the former Hewlett-Packard CEO Carli Fiorina gave the most polished performance, mostly by beating up on the absent Hillary, and by talking about (what else?) Obamaâs economic record and the apparently lethal deal with Iran. In the main show whom one thought did best depended on the predisposed ear of the listener.

When I heard Ohio governor John Kasich doing an imitation of Joe Biden on gay relations, I thought this guy in his effort to reach to the Left had done himself in with Republican voters. Perhaps he has but the Fox-Five, who come on before the Fox evening news, were slobbering all over the place about how John has grown on the gay question. The resident ânon-conservativeâ Juan Williams even averred that Kasichâs mature statement on a sensitive issue was the most admirable thing he had ever heard from the mouth of a Republican. Of course there ainât a snowballâs chance in Hell that Williams and those with his views would vote for the GOP candidates who are frantically courting their favor.

Cutting to the chase, however, what made the Thursday night spectacle worth watching, in between talking to a relative over the phone, was how the Fox-news team worked to drive Donald Trump out of the race. Ever since the debate the entire Murdoch media apparatus has been claiming that itâs sheer madness to believe that Megyn Kelly and the other question-askers, Bret Baier and Chris Wallace, were out to get the Donald. The ever objective Jonah Goldberg was dragged on to the Fox-Allstars to let us know how truly âbaffledâ he is that the Donald could even imagine that he was being set up. If the debate began with the demand for a pledge that none of the candidates would ever think of running as a third party candidate and would automatically support whomever the party nominated for president, that demand was clearly aimed at Trump. And one would have had to be an idiot or like Goldberg, a paid tool of the Murdoch media, not to recognize what had been planned. The Republican establishment and their media friends have been viciously attacking Trump for weeks, and even I was shocked to see Trump referred to as an âassholeâ in the New York Post on Friday, in what was supposed to be an epithet used by Jeb Bush to describe him. Apparently Jeb never reached for this obscenity, but the Post went on to explain why its editors considered the description apt in the case of the loud-mouthed xenophobic Trump.

To ease the bafflement of Goldberg and the other usual suspects, who were transported by the sterling objectivity of their coworkers and who canât imagine why anyone in his, her or its right mind would question their impartiality, allow me to offer these alternative opening questions or remarks. Why couldnât the Fox mavens have asked for starters if any of the panelists believes that the wages of the American working class are being helped by importing ever larger numbers of minimally skilled immigrants from the Third World? What about starting off the show by asking whether panelists who are being funded by Sheldon Adelson believe this has no effect whatsoever in how they understand Middle Eastern politics. I mention these examples in order to suggest that some questions are obviously aimed at putting certain participants in disadvantageous positions before the discussion even begins.

Lest the viewer believes this to have been an accident, one could also cite all the nasty comments and leaning questions that came from Megyn Kelly and her pals that were clearly intended to embarrass Trump or cause him to lose his temper. Bringing up, as Megyn did, that the Donald described Rosie OâDonnell as a âpigâ and then calling his comment an affront against all women was more than throwing out a âdifficult question.â It was intended to destroy Trump as a credible candidate, just as the powder puff questions that were directed at Jeb and Rubio were meant to strengthen their candidacy. The justification that one heard from the Murdoch faithful, that Trump got the tough questions because heâs the front-runner would insult the intelligence of a differently abled sea scallop. Jeb, who is the second-place candidate, did not get the same treatment as Trump. He was showered with benign questions, courtesy of FOX. Needless to say, those asking the questions were also doing the bidding of their boss, Rupert Murdoch, who has described Trump as a public embarrassment or worse.

What made the spectacle worth watching, however, was the way Trump responded. He didnât hold back but also never really lost his temper, until he went on twitter after the debate. If I had been in his place, I might have flown off the handle on prime time. But Trump sounded like the host of his own TV show, âThe Apprentice,â firing an incompetent would-be employee, for example, when he told the beautiful but thoroughly malicious Megyn Kelly that her comment had been grossly unfair.

I was exhilarated when in response to the âfollow-up questionâ of Megyn, that he had written insulting things about women other than OâDonnell, Trump shrugged his shoulders in utter indifference and flatly denied he was sorry. Even more telling, he made fun of politicians who are constrained by âpolitical correctness,â for which he confessed he had no time. Trump might have been even more effective if he had dealt with the Megynâs assertion, after she had slimed him, that as a presidential candidate he wouldnât be able to take on Hillary when she accused him of waging âwar on women.â Trump should have mentioned that Hillaryâs husband had said and done worse things to women. Besides, the supersensitive presidential candidates the GOP had been running in recent years had not cut into the feminist vote significantly, and so it might be time to give up on constituencies that arenât going to vote for a Republican presidential candidate, even in the person of Mr. Mom. Trump should also have had an answer when the hit squad accused him of having changed his views. He should have noted that other panelists, even the ones Megyn was making nice to, had done the same thing: What about Rubioâs or Cruzâs evolving views about immigration (albeit in different directions) or the conversion of some of the other panelists to the practice of gay marriage? Certainly Trump was not the only one on stage last Thursday who had rearranged his political furniture.

Mind, you I am not saying that Trump would make an excellent president or that he has a serious chance of winning the nomination from one of our two institutionalized national parties. All Iâm contending is that he and his paid assassins made the debate in Cleveland something more than a âsound and fury signifying nothingâ spectacle. I like Trump even better for having slammed the weasel-like GOP operative (sorry âpollsterâ) Frank Luntz for the organization of a post-debate focus group on FOX. Trump was perfectly right to suspect that this minion of the GOP establishment, whom he dared to call a âlow class slobâ was not exactly a detached scientific observer. Luntz may well have cherry-picked the Trump-haters on the way to providing his supposedly balanced public response. The âreactionsâ of Luntzâs peanut gallery were rather different from the way over forty percent of the public reacted to Trumpâs sometimes crude but refreshingly honest performance.

One final point: If the GOP establishment is afraid that Trump may upset their business by running as a third-party candidate, todayâs decision by the organizers of the Red State conference in Atlanta to disinvite him as a speaker for having disparaged Megyn Kelly in a post-debate tweet may have been fateful. It may have pushed the Donald in the direction in which he already planned to go. Anyhow that decision is one more proof (do we need any more?) of who really runs our âconservativeâ party. ← The Intellectual Roots of the American ...The French National Front and Donald Trump →
Current Commenter
says:
Current Date at Time Now
Leave a Reply - Comments on articles more than two weeks old will be judged much more strictly on quality and tone
Cancel Reply