I know I am not the only one to notice the recent wave of neocon attacks on Sarah Palin coming from David Frum, David Brooks, and Charles Krauthammer. They all make essentially the same point, i.e. that she is not experienced enough to become president. Brooks predictably has the most sophisticated argument, that experience is needed to condition one to act prudently in a crisis situation. That assertion may or may not be true, but it enables the neocons to overtly support Palin while simultaneously undermining her.

If it were anyone but the neocons one might think that the three pundits are speaking up for the good of the nation, suggesting that Palin might actually be a bad choice. But as neocons characteristically are always selling a carefully coordinated and calibrated message that is intended to further their group interest, something else must be at work here. McCain is and always has been their man and Palin reportedly has been receiving intensive briefings both from the neocons on the McCain staff and also from the stalwarts at the American Enterprise Institute. It has been suggested that the neocons have been unhappy with some of Palin’s responses in the briefing sessions on foreign policy issues and there is some concern that she might not be “reliable” if something were to happen to McCain. There have been behind closed doors meetings at AEI involving foreign policy heavies like Pletka and Brooks discussing what to do about the Palin problem.

Does that mean the neocons are covering both bets in the upcoming elections? Possibly. Bill Kristol is still praising Palin but The Weekly Standard and Wall Street Journal have been somewhat less than enthusiastic. Recall also that Kristol was finding a lot to like in Democratic hawk Hillary some months back and that the neocons in general don’t really care about social or domestic issues like abortion or immigration. They might be quite comfortable with an Obama administration in which Democratic hawk Biden is calling the shots on foreign policy guided by the likes of Dennis Ross, neocon-lite. The neocons might now believe that a Democratic administration is their best bet for a sustainable foreign policy that they would be comfortable with and which would allow them to continue to play a major role. 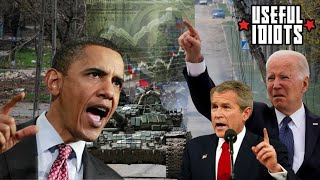