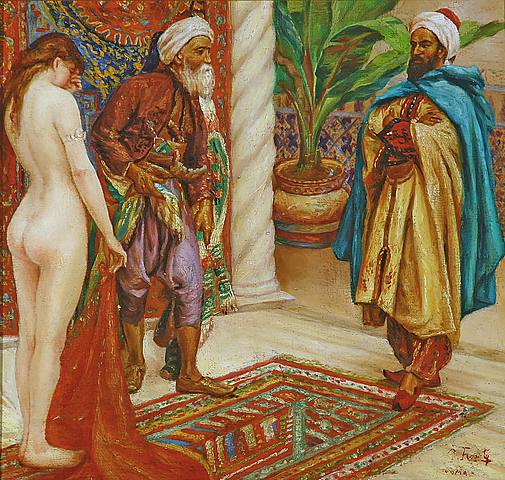 [â¦] I won a genetic lottery, and I am a recipient of a legacy. For the past few centuries, we have defined beauty not just as health and youth and symmetry that weâre biologically programmed to admire, but also as tall, slender figures with femininity and white skin. This is a legacy that was built for me, and that Iâve been cashing in on. (Russell, 2013)

Yes, Ms. Russell did win a genetic lottery, being certainly more attractive than average. But she also mentioned a second unearned windfall: a beauty privilege due to the âlegacyâ of the past few centuries, when Europeans lorded over the world. Without that legacy, she would presumably be a very ordinary woman, perhaps even ugly.

This presumption can be tested. There was a time, not so long ago, when Europeans were weaklings on the world scene, when large parts of their continent were ruled by other peoples, and when the center of geopolitical power lay in the Middle East. In such a context, women like Cameron Russell would have had much less beauty privilege to cash in on.

In reality, they had plenty, and not just in Europe. âWhite slaveryâ today means the international trafficking of women for prostitution. Back then, it meant the provisioning of the Muslim world with European concubines, who were valued for their white skin (Lewis, 1990, pp. 11-13, 56, 72). This trade was considerable in Muslim Spain:

The same convoys of booty also included women, these Frankish women who were all the more sought after in Cordova because they were blond and fair-skinned. It was among them, as among the captive women from Gascony, that the Umayyad princes chose their most pampered concubines and who, once they became mothers, were themselves raised to the rank of veritable princesses, of proven sultanesses (umm walad) who were influential and quick to enter, with the assistance of Slav eunuchs, into secret and complicated palace intrigues. But the Frankish women did not populate only the caliph’s harems; the dignitaries of the khassaand the rich burghers of the cities also procured them at lavish prices, like, in the modern period, the Circassian women who have so curiously tinted the upper classes of oriental Muslim society. (LÃ©vi-ProvenÃ§al, 1953, p. 179)

Such women came from places that were poorer and less advanced than the Muslim world. Neither they nor their future masters knew what white skin would signify over a half-millennium later. Indeed, no one foresaw the rise of Europe to geopolitical preeminence, certainly not this 11th-century Muslim author:

For those who live furthest to the north between the last of the seven climates and the limits of the inhabited world, the excessive distance of the sun in relation to the zenith line makes the air cold and the atmosphere thick. Their temperaments are therefore frigid, their humors raw, their bellies gross, their color pale, their hair long and lank. Thus they lack keenness of understanding and clarity of intelligence, and are overcome by ignorance and dullness, lack of discernment, and stupidity. Such are the Slavs, the Bulgars, and their neighbors. (Lewis, 1990, p. 47)

Nonetheless, their women were considered strikingly attractive, even to the point of being simply called âbeautiful girls.â An 8th-century Arab musician wrote: âThey used not to train beautiful slave girls to sing, but they used only to train yellow and black girls. The first to teach valuable girls to sing was my fatherâ (Lewis, 1990, p. 56).

What gave rise to this desire for light-skinned foreign women? It seems that fair skin has long been key to Arab notions of female beauty:
Praise of a girl’s looks is traditionally couched in such terms as: Her face is like the full moon, her mouth is an almond, her nose a cardamon, she is plump, and dimpled etc. […] The highest praise is perhaps that she is as white as snow â strange praise indeed to come from a people very few of whom had ever seen snow. (Haim 1978, p. 88)

[The moon] is the most common image used to represent female beauty. When attempting to draw the attention of a beautiful girl on the street, a young man may call out, ââEs ya qamar?â (roughly, âWhatâs happening, O moon?â). Two important components of the image, brightness (fairness of skin) and roundness (of face), convey the popular conception of beauty in Palestinian and Arab culture. (Muhawi and Kanaana 1989, p. 60, cf. also 122, 181)

Not just in Arab societies â¦

In general, traditional human societies share a belief that women should be fairer-skinned than men (van den Berghe and Frost, 1986). This cultural norm runs parallel to a physical norm, i.e., in all human populations, women are less pigmented than men from puberty onward. Both melanin and cutaneous blood are involved, with the result that women look paler and men browner and ruddier. Women also display a sharper contrast between facial skin color and eye/lip color. These visual cues are subconsciously used by the human mind to determine whether an individual is a man or a women (Dupuis-Roy et al., 2009; Frost, 2011; Russell, 2010; Russell, 2003; Russell and Sinha, 2007; Tarr et al., 2001).

In addition to aiding sex recognition, these visual cues may also trigger feelings that in one way or another depend on the sex of the person being observed. Since lighter skin is specific not only to women but also to infants, some authors view it as one of several features (smooth, pliable skin, high-pitched voice, small nose and chin, etc.) that the adult female body has borrowed for the purpose of calming aggressive impulses in the adult male and inducing feelings of care (Frost, 2010, pp. 134-135). Such feelings may feed into male eroticism but are not erotic per se. Desire for darker female skin is attested as an alternate, though secondary mode of sexual arousal, even in contexts where exotic otherness seems to play no role, such as premodern European peasant societies, specifically within a context of passionate but short-lived relationships (Frost, 2010, pp. 90-91). This alternate eroticism, previously repressed, has become popular in the Western world since the 1920s with the growing acceptance of tanned skin as a female fashion accessory (Frost, 2010, pp. 91-103).

Men thus seem to be innately oriented toward paler female skin, if only as part of a mechanism for sex recognition. This orientation can, but does not always, translate into erotic attraction and mate choice. One notable exception is the modern Western world, where tanned female skin has become increasingly popular. Another seems to be the high-polygyny region of sub-Saharan Africa and Papua-New Guinea, where attitudes toward female skin color tend to be ambivalent (Frost, 2010, pp. 83-97). First, the relative scarcity of female mates ensures that all available women have takers. Second, due to the higher polygyny rate, fathers invest less in their offspring and mothers invest more. Darker women may thus benefit from a perception that they are better at hoe farming and providing for their children. Ardener (1954) makes this point with regard to the Ibo of Nigeria:

In the choice of a wife, yellow-skinned girls are regarded as beauties, and, other things being equal, they command higher bride prices. On the other hand it is generally held, especially by dark-complexioned persons, that yellow-skinned people are not as strong as the dark and do not live as long. A ‘black’ girl is said to be a harder worker. [â¦] A Mission headmaster was of the opinion that the preference for yellow girls was greater nowadays than in his youth. He thought that the reason for this was that people formerly looked for strength rather than beauty and tended to marry black girls.

There is a widespread belief, particularly among proponents of whiteness studies, that notions of beauty are determined by power relationships. The strong and mighty are inevitably âbeautiful.â This belief is so entrenched that little concern is shown for counterfactual evidence, such as the medieval trade in fair-skinned women for clients in North Africa, the Middle East, and South Asia.

This trade existed for two reasons. On the one hand, European states were too weak to stop it. On the other, European women were considered beautiful by people in geopolitically stronger states to the south and east. Again, this pattern is inconsistent with the belief that power relationships determine notions of beauty.

A Look at an Early European
Peter Frost
• 41 Comments • Reply

A Fruitful Encounter
Did the Christian doctrine of original sin create the guilt cultures of Northwest Europe? Or did the arrow of causality...
Peter Frost
• 60 Comments • Reply
← Still Missing the PointThe Other Slave Trade →
Hide 53 CommentsLeave a Comment
"White Skin Privilege"
• 53 Comments
Commenters to Ignore
Commenters to ignore (one per line)