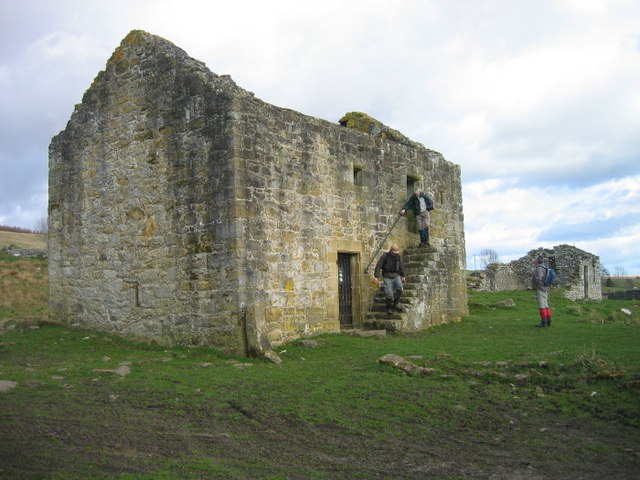 Home sweet home in the Scottish borderlands. This was one of the last regions of Britain to be pacified and brought under State control. People lived in fortified homes where the second floor could be reached only by an external ladder that could be pulled up. The stone walls were up to 3 feet thick. (source â photo owned by Les Hull)

I first went to elementary school in a largely English Canadian neighborhood of Scarborough. Schoolyard fights were only occasional, and there was almost always a good reason. My family then moved to a largely Scotch-Irish town in central Ontario. There, the schoolyard fights were a daily occurrence, and they seemed to happen for no reason at all. I eventually found out the reason â¦ something to do with ârespectâ or rather the lack of it.

We like to think that people everywhere respond to situations more or less as we do. If the response is angerâred boiling anger that can killâwe assume there must be a very good reason. Otherwise, the person wouldnât be so angry.

Hence the puzzlement over the Boston bombers. What drove them to such an act? Had they been treated badly? This was the conclusion reached by Justin Trudeau, the recently elected leader of the Liberal Party of Canada:

But there is no question that this happened because there is someone who feels completely excluded. Completely at war with innocents. At war with a society. And our approach has to be, where do those tensions come from? (The National, 2013)

Actually, the Tsarnaev brothers were hardly excluded from American society. Tamerlan married the daughter of a well-off American family and lived in their spacious home. Sure, if you look hard enough, you may find evidence of exclusion. There must have been slights and indifference, perhaps jokes about his first name, but such things donât cause normal people to kill.

âNormalâ is a relative term. In other societies, people do kill for apparently trifling reasons. In Les damnÃ©s de la Terre, Frantz Fanon discusses male violence in Algeria, particularly the lack of restraint and the apparently trivial motives:

Autopsies undeniably establish this fact: the killer gives the impression he wanted to kill an incalculable number of times given the equal deadliness of the wounds inflicted.

[â¦] Very often the magistrates and police officers are stunned by the motives for the murder: a gesture, an allusion, an ambiguous remark, a quarrel over the ownership of an olive tree or an animal that has strayed a few feet. The search for the cause, which is expected to justify and pin down the murder, in some cases a double or triple murder, turns up a hopelessly trivial motive. Hence the frequent impression that the community is hiding the real motives. (Fanon, 2004, p. 222)

This behavioral pattern begins early in life. Parents seek not to suppress it but to channel it in the right direction, i.e., defense of the family:

In Algerian society for example, children are raised according to their sex. A boy usually receives an authoritarian and severe type of upbringing that will prepare him to become aware of the responsibilities that await him in adulthood, notably responsibility for his family and for the elderly. This is why a mother will allow her son to fight in the street and will scarcely be alarmed if the boy has a fall or if she sees a bruise. The boy of an Algerian family is accustomed from an early age to being hit hard without whimpering too much. People orient him more toward combat sports and group games in order to arm him with courage and enduranceâvirtues deemed to be manly. (Assous, 2005)

This pattern of behavioral development doesnât differ completely from my own. The difference is largely one of degree. But thereâs also a difference in kind: the violent male as an independent actor who fights for himself and his immediate family. For ânormalâ boys in Western society, male violence is legitimate only when done under orders for much larger entities: the home team, the police, the country, NATO â¦ Everywhere else, it is evil, criminal, and pathological.

You may not have heard, however, that this finding holds true only for societies like our own. When the Milgram experiment was done with Jordanian assistants, they were just as willing as Americans to inflict pain under orders (62.5%). But they were more willing than Americans to inflict pain when no orders were given, with 12.5% of them delivering shocks right up to the top end of the scale (Shanab & Yahya, 1978).

How would Chechens have responded in the same situation? Or Algerians? Or Scotch-Irish? Male violence has long been viewed differently in different societies. In our own, it is stigmatized, except when done âunder ordersâ by soldiers or the police. Some societies, however, had no police or army until recent times. Every adult male was expected to use violence to defend himself and his family. Yes, you could go to a law court to settle your differences with someone. But even if the court ruled in your favor, the sentence still had to be enforced by you, your brothers, and other male family members. Thatâs the way things were done. For millennia and millennia.

Humans differ from other animals in that we create a large part of our environment. We adapt not only to a physical environment of climate, landscape, vegetation, and wildlife but also to a cultural environment of our making: codified laws, behavioral norms, religious beliefs, social and political systems, and so on. We shape our environment, and this environment shapes us. To be more precise, it selects the kind of individuals who can live in it.

Initially, all adult males everywhere had to defend themselves and their families, not by paying taxes but by getting their hands bloody. This situation changed with the rise of the State. In other words, some powerful men became so powerful that they could impose a monopoly on the use of violence. Only they or their underlings could use it. Male violence had been ânationalizedâ and could be used only if ordered by the State or in narrowly defined situations of self-defense.

In this new pacified environment, the violent male went from hero to zero. He became a criminal and was treated accordingly. Society now favored the peace-loving man who got ahead through work or trade. This process has been described for England and other parts of Western Europe by several academics, like Gregory Clark. With the establishment of strong States toward the end of the Dark Ages, and a subsequent pacification of social relations, the incidence of violence declined steadily. Violent predispositions were steadily removed from the population, either through the actual execution of violent individuals or through their marginalization and lower reproductive success. The meek thus inherited the earth (see previous post).

Or rather a portion of it. In some parts of the earth, particularly remote mountainous areas, State control came very late. These are societies in the earliest stages of pacification. Male violence is a daily reality, which the State can only contain at best. Such is life in Chechnya â¦ and elsewhere.

But is such gene-culture co-evolution possible? How susceptible is male violence to the forces of natural selection? Are some men more predisposed to violence than others? Is this a heritable trait, or something that men pick up from their peers?

A meta-analysis of twin and adoption studies estimated a heritability of 40% for aggressive behavior (Rhee & Waldman, 2002). A later twin study found a heritability of 96%, where the subjects were 9-10 year-olds of diverse ethnic backgrounds (Baker et al., 2007). This higher figure reflected the narrow age range and the use of a panel of evaluators to rate each subject. In the latest twin study, the heritability was 40% when the twins had different evaluators and 69% when they had the same evaluator. By comparison, many of us accept that homosexuality is inborn even though the heritability of that behavior is much lower: perhaps 34-39% for gays and 18-19% for lesbians (Wikipedia, 2013).

The actual neural basis remains to be sketched out. Perhaps a greater predisposition to violence simply reflects stronger impulsivity and weaker internal constraints on behavior (Niv et al., 2012). Or perhaps there is a lower threshold specifically for expression of violence. Or perhaps ideation of violence comes easier. Or perhaps the consequences of a violent act trigger feelings of pleasure. Frantz Fanon noted that the violent male seems to feel pleasure at the sight of blood. He needs to sense its warmth and even bathe in it. There is in fact an extensive medical literature about âabnormalâ individuals who feel pleasure at the sight of blood and even wish to feel and taste it, whereas ânormalâ individuals feel disgust and often faint (Vanden Berghe & Kelly, 1964). Again, words like ânormalâ and âabnormalâ are relative â¦

All of this may seem incomprehensible to nice folks like Justin Trudeau. Surely, no one in his right mind would enjoy violence. There must be another reason for such horrors. A good reason. A reason that would make sense to nice folks. Because, deep down, weâre all nice folks, arenât we? Does Natural Law Exist?
Peter Frost
• 54 Comments • Reply
← The Gay Germ HypothesisCultural Modernity and Behavioral Moder... →
Hide 45 CommentsLeave a Comment
"Where Do Those Tensions Come from?"
• 45 Comments
Commenters to Ignore
Commenters to ignore (one per line)