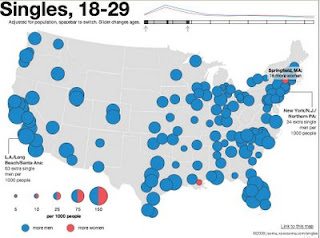 Over the past forty years, there has been a remarkable flip-flop in the ratio of single males to single females, particularly in the reproductive age bracket. Beginning in the late 1970s and early 1980s, this âoperational sex ratioâ slipped from male scarcity to parity and then to a relative excess of males, due to a decline in male mortality and an increase in divorce and remarriage by older men with younger women (Pedersen, 1991). The imbalance seems to have steadily worsened. In Germany, single men now outnumber single women up to the age of 60 (Glowsky, 2007). In England and Wales, the latest statistics show that the tipping point has inched up to the age of 75:

But good news is on the horizon. Figures show a growth in the pool of potentially eligible men â now they may end up being the ones doing the chasing. There are more single men in England and Wales than the total number who are married, divorced or widowed for the first time since comparable records began in 2002.

Single men outnumber unmarried women in every age group apart from the over-75s, according to the official statistics on marriage, published yesterday. (source)

The imbalance is even worse (or better, from the above journalistâs viewpoint) if we look only at childless singles. And then thereâs the rising incidence of polygyny among ostensibly âsingleâ people â¦

What about the United States? Jonathan Soma has created an interactive map that shows the operational sex ratio by city and by age group. In the 18 to 29 group, single men clearly dominate (see above map). The tipping point is reached in most East Coast cities with the 35-39 group and in New York with 40-44 year-olds. So shy American males can count themselves lucky. They only have to wait until their late 30s to get married.

Surprisingly, this demographic shift has elicited little comment. I suspect part of the reason is that shy males tend to become computer programmers rather than members of the âchattering classâ. The latter tend to be â¦ single women.

Young, Male, and Single
Peter Frost
• 331 Comments • Reply
← John Tooby and Leda Cosmides. Why Not C...China and Interesting Times ... →
Hide 10 CommentsLeave a Comment
"When Is the Tipping Point?"
• 10 Comments
Commenters to Ignore
Commenters to ignore (one per line)

← John Tooby and Leda Cosmides. Why Not C...China and Interesting Times ... →
Current Commenter
says:
Current Date at Time Now
Leave a Reply - Comments on articles more than two weeks old will be judged much more strictly on quality and tone
Cancel Reply
Commenting Disabled While in Translation Mode