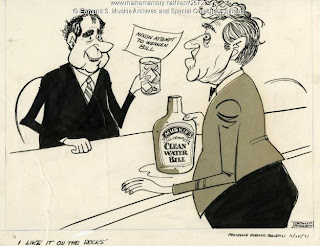 In 1972, the U.S. passed the Clean Water Act, despite a presidential veto by Richard Nixon. Did this act also end an era of unusually high estrogen levels in the environment? (cartoon source)

There has been much concern over the presence of âenvironmental estrogensâ in our drinking water and elsewhere in the environment. These are man-made chemicals, like DDT, PCBs, and dioxins, that mimic the effect of natural estrogens. Among other things, theyâre blamed for declining sperm counts and rising male infertility.

Yet estrogen also enters our environment from a source that excites much less concern. This is the estrogen that women excrete every day in their urine. Shouldnât that source also be cause for worry?

At first thought, no. People have been urinating for a very long time. And other animals for even longer. During that time, microorganisms have evolved to break down and feed on whatever is present in urine. Larger organisms have likewise had plenty of time to adapt to this aspect of their environment. Urine is so ubiquitous and unchanging that it could not possibly pose a danger. Or could it?

Actually, two things have changed in recent times. One is that humans have become much more numerous, with the result that much more urine is being discharged into the environment. Another is the way it is discharged.

Before the late 19th century, urine entered the environment via privies, cesspools, and ditch sewers (Rockefeller, 1996). It was thus discharged into a warm stagnant medium rich in organic matterâideal conditions for rapid breakdown of the estrogen molecule by nitrifying bacteria (Vader et al., 2000). These same conditions, however, increasingly became a threat to public health, particularly in the ever larger and more numerous urban centers.

And so a new disposal system was developed. Human waste was now expedited via sewers to a central facility where the liquid component would be separated and rapidly discharged into the nearest cold body of waterâwhich often doubled as the cityâs source of drinking water. It was a perfect system for discharging urinary estrogen into the environment with as little biodegradation as possible â¦ and then bringing it back into the human organism. As for urinary androgen, it was also present in wastewater but at much lower levels because of its lower solubility in water (Tabak et al., 1981).

That system survived until the late 1960s and early 1970s, when concern about pollution brought an upgrading of almost all sewage treatment facilities. If we look at the total number of Americans who produce untreated wastewater, this number peaked at 70 million in 1960 before falling to 2 million after passage of the Clean Water Act in 1972 (Copeland, 1993; US Council on Environment Quality, 1984). Primary treatment removes 35?55% of estrogen from wastewater, and this proportion rises to 50?70% for secondary treatment (Tabak et al., 1981). Today, tertiary treatment removes 90% of all natural and synthetic estrogenic compounds (LeQuire, 1999).

But what about the 100-year period when most wastewater went untreated? During that time, the main sources of drinking water must have been highly contaminated with estrogen. What were the effects? The most obvious ones would have been a decline in sperm counts and a rise in male infertility. But were there others? And should we soon see a reversal of these trends?

I tried to publish a paper on this subject, but the reviewers were skeptical. I was indulging in speculation that could never be proved one way or another. There simply are no records of estrogen levels in the environment for the period in question.

So I published my speculations on my blog (here, here, and here) and let the matter lie â¦ while keeping an eye on the literature. Recently, three findings have come to my attention:
Primary treatment less effective than previously thought

A recent paper confirms that tertiary treatment of wastewater removes over 90% of all estrogen. On the other hand, primary treatment is less effective than previously thought, the removal rate being only 10% (Limpiyakorn et al., 2011).

In the past, estrogen levels were measured only for the three most common kinds of estrogen: estrone (E1), estradiol (E2), and estriol (E3). Other natural estrogens, however, are present in urine. The total estrogen level in wastewater is thus 18-34% higher than previously thought:

[â¦] the total excretion rates of EEQ [estrogen equivalent] by estrone (E1), 17?-estradiol (E2), and estriol (E3) only accounted for 66â82% of the total excretion rate of EEQ among four different groups, and the other corresponding natural estrogens contributed 18â34%, which meant that some of the other natural estrogens may also exist in wastewater with high estrogenic activities. (Liu et al., 2009)
River and ocean sediments reveal formerly high estrogen levels in the environment

It is possible to look into the past by taking cores of sediments from the bottoms of lakes, rivers, and coastal waters. A study of the River Thames has found that estrogen levels are higher in river sediments deposited before the 1960s:

There is an indication of higher concentrations of E1 and E3 in samples deemed to be deposited before the mid-1960s, prior to the introduction of biological treatment at STWs [sewage treatment works] discharging to the estuary. [â¦] This provides indirect evidence that historical improvements to wastewater treatment have resulted in a decrease in the concentrations of steroids in the effluent, as observed for PCBs and DDT from the same core (Gomes et al., 2011)

A similar finding comes from a study of sediment cores from Japanese coastal areas:

The concentration of natural estrogens such as 17?-estradiol (E2) and estrone (E1) in the sediment of coastal areas in Japan was determined [â¦] Core samples were sliced every 2cm from the surface to 20cm deep for the measurement of estrogen. Although the concentrations of estrogens decreased with the depth of core samples, fairly high levels of estrogens were again noticed at the layer deeper than 16cm. (Matsuoka et al., 2005)

The most promising line of research seems to be the use of sediment cores to estimate past levels of estrogen in the environment. One problem will be calibration of sediment dating. Gomes et al. (2011) have pointed to a possible solution by noting that the mid-1960s correspond to the first sediment layer that contains synthetic estrogen, i.e., from birth control pills. Another problem is that estrogen seems to degrade gradually over time, even in river or ocean sediments.

The Lack of Progress in Science: Sex Differences
Razib Khan
• 98 Comments
← Too Darn Hot?He Who Pays the Piper ... →
Hide 7 CommentsLeave a Comment
"What You Don't Know Can Hurt You"
• 7 Comments
Commenters to Ignore
Commenters to ignore (one per line)

← Too Darn Hot?He Who Pays the Piper ... →
Current Commenter
says:
Current Date at Time Now
Leave a Reply - Comments on articles more than two weeks old will be judged much more strictly on quality and tone
Cancel Reply
Commenting Disabled While in Translation Mode