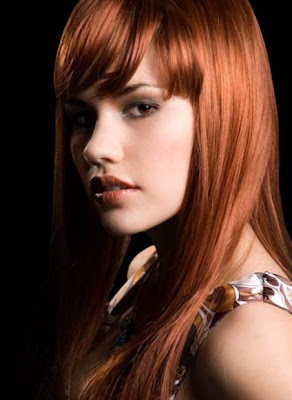 The âhotâ hair color this year (source). While there seems to be a general trend to prefer average physical characteristics, this doesnât seem to apply to hair color. People seek colors that are uncommon or even unnatural.

Europeans have departed from the species norm of black hair and brown eyes by evolving a wide range of bright hair and eye colors. What is the selective advantage of these new hues? Or are they merely a side effect of something else?

Iâve argued that these new colors were selected for â¦ their newness and colorfulness. To be precise, their selective advantage lay in their novelty and brightness. These eye-catching qualities enabled women to improve their mating prospects at a time when the operational sex ratio was skewed toward a female surplus and a male shortage.

This is the logic of advertising. Visual merchandising matters most in saturated, highly competitive markets that offer too many interesting choices (Lea-Greenwood, 1998; Oakley, 1990). Such a context rewards products that stand out because of their bright or novel look, as seen in colors for home interiors. This market has grown more competitive over the past half-century, and the novelty factor has correspondingly grown more important: preference for one paint color rises until satiated, then falls and yields to preference for another (Stansfield & Whitfield, 2005).

In the natural world, and under conditions of intense sexual selection, this same logic leads to a color polymorphism. A new color appears through mutation and spreads through the population until it is as common as the established color. This equilibrium will then last until another color variant appears. The total number of colors thus grows over time.

This aspect of sexual selection can be demonstrated under controlled conditions. In an American study, male participants were shown pictures of attractive brunettes and blondes and asked to choose, for each series, the woman they would most like to marry. One series had equal numbers of brunettes and blondes, a second series 1 brunette for every 5 blondes, and a third series 1 brunette for every 11 blondes. Result: the scarcer the brunettes were in a series, the likelier any one of them would be chosen (Thelen, 1983).

This sex difference undoubtedly reflects the use of artificial hair coloring, although female hair color is naturally more diverse than male hair color (a legacy of the female-directed nature of sexual selection in Europe). Interestingly, women are using hair dyes to give themselves less typical hues, rather than more typical ones. Such colors may be uncommon but naturally occurring, such as platinum blonde and red. Or they may not exist at all in nature, such as green, purple, and magenta.

Ikizler, A.S. (2007). Gender role representations in Turkish television programs, Submitted as a St. Mary’s Project in Partial Fulfillment of the Graduation Requirements, St. Mary’s College of Maryland for the Degree of Bachelor of Arts in Psychology
http://www.smcm.edu/psyc/_assets/documents/SMP/Showcase/0607-AIkizler.pdf

← Why Are Redheads Less Common Than Blondes?Vitamin D Deficiency Among Northern Nat... →
Current Commenter
says:
Current Date at Time Now
Leave a Reply - Comments on articles more than two weeks old will be judged much more strictly on quality and tone
Cancel Reply
Commenting Disabled While in Translation Mode