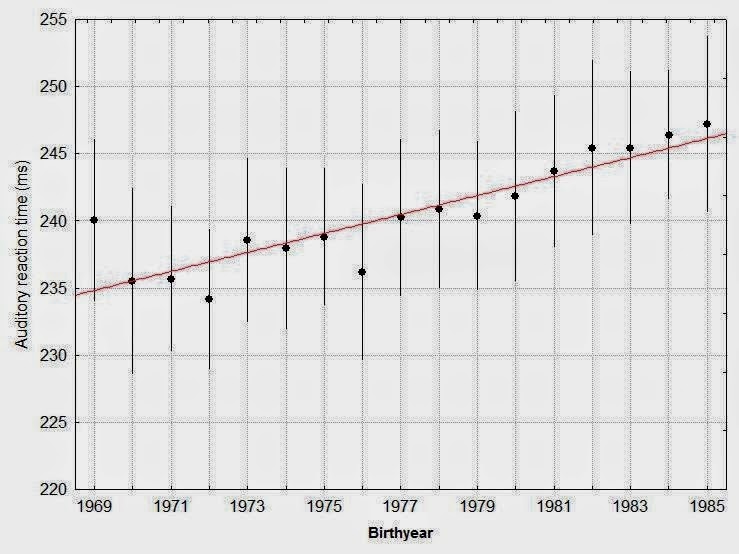 A steady increase in reaction time seems to begin circa 1980 in Sweden, Great Britain, and the United States (h/t to hbd* chick)

Has reaction time been steadily increasing from generation to generation? This was the finding of a paper last year, which argued that mean IQ had fallen in Britain by 13 points since Victorian times (Woodley et al., 2013). The problem here was not the extrapolation from reaction time to IQ, which in any case should not have changed over the past century. The problem was the possibility of sampling bias. The early samples (from the Victorian age) were slanted toward people of elite origin. In one case, they were University of Chicago students; in the other, museum visitors who had paid to take the reaction test. In contrast, the recent samples were much more representative, largely because the educational system had become more universal. Thus, the drop in reaction time over time may be largely, if not wholly, an artefact of better sampling of the general population (hbd* chick, 2013).
This criticism seems less applicable to a study of this drop in more recent times. This study was presented as a conference paper and only the abstract is available. But it does seem interesting:

Here, we show that change in genetic intelligence can be estimated, independently of the Flynn effect, by way of simple reaction time (RT). Data from three studies with different samples from Sweden, UK, and USA converge at an RT increase of 0.7-0.9 ms per year, which corresponds to a decrease in intelligence of between 4 and 5 IQ points per generation, or 1.3-1.7 points per decade in these countries. (Madison, 2014)

Thatâs a big jump in reaction time. Moreover, most of the increase seems to be squeezed into the last six years of the study, from 1980 to 1985 (see above chart). No selection pressure could have produced such a change over such a short time. So what could possibly be going on here?

Keep in mind that Sweden, the United Kingdom, and the United States are not closed systems. All three countries are open to the world, and the early 1980s corresponded to a time when they became much more open. Consequently, we are not looking at change within a population, but rather the replacement of one population by another, and this change would have been most noticeable in the school classrooms where these tests were conducted.

The other finding of this study is that the Flynn Effect has been masking a decline in intellectual capacity. Yes, weâre getting better at giving standardized answers to standardized questions, but this change doesnât reflect an actual increase in intelligence. Weâre just allocating more and more mental resources to the task of test-taking. The reaction time data suggest that real intellectual capacity has been declining since circa 1980.

At the same conference, Armstrong (2014) likewise argues that the Flynn Effect may be illusory for the most part:

However, “general intelligence”, the biological substrata which cause the positive manifold amongst different IQ tests, has not increased, since the sizes of Flynn effects on different tests are inversely related to those tests’ g loadings. The same pattern holds amongst items. Thus, for example, vocabulary size (generally the most or among the most g loaded tests) has shown a small Flynn effect, and by some measures even a decline. However, the “Coding” test (from the Wechsler) or the “Draw-a-Man” test both have low g loadings and have shown very large Flynn effects.

To date, Madisonâs paper is unavailable. All we have is an abstract that raises more questions than it answers. We will have to wait for the full paper before a thorough assessment can be made.

Woodley, M.A., J. Nijenhuis, and R. Murphy. (2013). Were the Victorians cleverer than us? The decline in general intelligence estimated from a meta-analysis of the slowing of simple reaction time, Intelligence, 41, 843-850. http://lezgetreal.com/wp-content/uploads/2013/05/were-the-victorians-smarter-than-us.pdf

Why Is Intelligence Declining? Our Rulers Donât Want You to Know
Lance Welton
• 189 Comments • Reply
← The Puzzle of European Hair, Eye, and S...A Pathway to Pro-Social Behavior →
Hide 20 CommentsLeave a Comment
"What Happened in the 1980s to Reaction Time?"
• 20 Comments
Commenters to Ignore
Commenters to ignore (one per line)

← The Puzzle of European Hair, Eye, and S...A Pathway to Pro-Social Behavior →
Current Commenter
says:
Current Date at Time Now
Leave a Reply - Comments on articles more than two weeks old will be judged much more strictly on quality and tone
Cancel Reply
Commenting Disabled While in Translation Mode