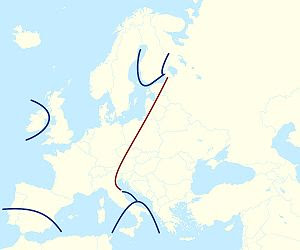 The âHajnal lineâ marks the eastern limit of a longstanding pattern of late and non-universal marriage. The line in red is Hajnal’s. The dark blue lines show areas of high nuptiality West of the Hajnal line. Source

In the 17th and 18th centuries, settlers emigrated from land-poor France to land-rich Canada. The result was a lower age of marriage. Young men and women no longer had to wait for their parents to hand over the family farm. Land was plentiful, and early family formation much easier.

This new social reality led to a new biological reality. From one generation to the next there was a steady contraction of the time between age of marriage and age of first birth. Married womenâmany as young as 15â were getting pregnant faster. The mean age of full reproductive maturity seems to have slowly fallen at a steady rate, apparently through the reproductive success of women who could better exploit the opportunities for early family formation (Milot et al., 2011).

But what about the homeland of these French settlers? Had that land-poor environment selected for a later onset of full reproductive maturity? That would seem to be a logical inference. Late and non-universal marriage was in fact the pattern throughout Europe west of a line stretching from Trieste to St. Petersburg:

By 1650, when village reconstitution studies become sufficiently numerous to render the generality of the pattern indubitable, the average age of women at first marriage was twenty-four or over, 7 to 20 per cent of women never married, and the incidence of childbirth out of wedlock was below 3 per cent. This marital pattern restricted fertility massively. A very considerable minority of women remained single and bore no children; those who married bore none for the first ten years of their fecund life-phase, on average. If they had their last child at the age of forty, their entire reproductive careers would span roughly fifteen years, a long time by modern standards but remarkably brief in a pre-transition context. Resulting fertility was less than half the rate that would have been achieved if all women between fifteen and fifty were married. (Seccombe, 1992, p. 184)

The âWestern European marriage patternâ was initially thought to have developed after the Black Death of the mid-14th century. But this belief has been challenged by a study of marriage between 1252 and 1478 in an English community:

The average age at first marriage in the Lincolnshire Fenland before the Black Death would be 24 years for the woman and 32 years for the man. The wife would die one year before her husband and the marriage would last for about 13 years. The couple could have six children, if their fertility was higher than average, of whom, judging by pedigrees, perhaps three would survive to become adults. After the Black Death the mean age would be 27 for the woman and 32 for the man. The husband would die three years before his wife and the marriage would last about 12 years. Again the couple could have six children, of whom perhaps three would survive to become adult. (Hallam, 1985, p. 66)

This pattern of late marriage may have been accentuated by the Black Death, but it was already present beforehand. Hallam (1985, p. 56) cites additional evidence for late marriage farther back in 9th-century France. On the estates of the Abbey of St Germain-des-PrÃ©s near Paris, about 16.3% of all adults were unmarried. In Villeneuve-Saint-Georges, the figure was 11.5%. Seccombe (1992, p. 94) cites a 9th-century survey of the Church of St Victor of Marseille, where both men and women appear to have married in their mid to late twenties.

Going even farther back, Seccombe (1992, p. 94) cites the Roman author Tacitusâ reference to Germanic women being ânot hurried into marriage [and] as old and as full-grown as the men [who were] slow to mate.â

So when did the Western European marriage pattern begin? I suspect its origins lie in the late Neolithic of Western Europe, when farming communities had reached a saturation point. With farmland in short supply, young men and women had to wait their turn before they could marry and have children of their own. And some would never marry.

What happened to these never-married? They may have turned toward community service of one kind or another. If they couldnât have children of their own, they wouldâve invested their energies in helping others of their communityâwho were often their kinfolk. In this respect, the Catholic Church may have simply adopted and further developed a cultural pattern that was already present in Western Europe.

By the early Christian era, this pattern was clearly in evidence: monks and nuns dedicated their lives to creating centers of learning and, eventually, colleges and universities. They also founded hospices for the sick and injured. Much of what we now call the âwelfare stateâ has its origins in the work of these celibate men and women.

Together with the prohibition of cousin marriage, this pattern of lengthy and sometimes lifelong celibacy paved the way for a future of larger and more open societies where the State, and not oneâs clan, would provide collective services. Of course, it wasnât planned that way. Nothing is planned in cultural or biological evolution. Western Europe simply accumulated a mix of cultural traits that would later make possible the rise of âmodern society.â

Did this marriage pattern shape the biology of Western Europeans through natural selection? Was there gene-culture co-evolution? This is likely with respect to the pace of sexual maturation. Keep in mind that the time between menarche and first birth was ten to twelve years on average. Nature abhors a vacuum, and there would have been a tendency to slow the pace of sexual maturation for both biological and psychological traits. Just as land-rich North America selected for successful pregnancy at younger ages, the reverse had probably happened in land-poor Europe.