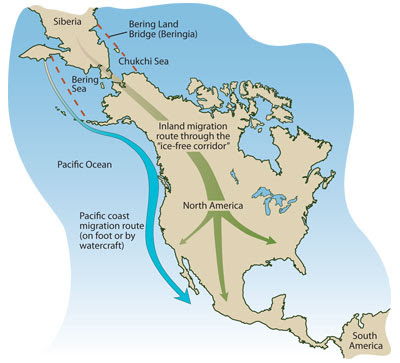 Modern humans entered the Americas from northern Eurasia. As they entered tropical environments farther south, they had to evolve new genetic adaptations from scratch. They no longer had the ones their remote forbearers had back in Africa. (Source)

OK, so modern humans have archaic admixture, and the degree of admixture seems to be highest among sub-Saharan Africans and Melanesians. But what does this factoid mean? Does it mean anything at all?

One school of thought says it means nothing at all. Ernst Mayr held this view:

The claim has been made that species owe much of their genetic variability to introgressive hybridization. However, all the evidence contradicts this conclusion so far as animals is concerned. Not only are F1 hybrids between good species very rare, but where they occur the hybrids (even when not sterile) are demonstrably of inferior viability. The few genes that occasionally introgress into the parental species are not co-adapted [â¦] and are selected against. Introgressive hybridization seems to be a negligible source of genetic variation in animals. (Mayr, 1970, p. 80)

âCo-adaptationâ means that genes are selected for their ability to work with other genes. âOn one genetic background a given gene may add to the fitness of the genotype; on another genetic background the same gene may create an unbalance and produce a severely deleterious effectâ (Mayr, 1970, p. 169).

Yet some genes seem to be of the âstand aloneâ sort. We see this when genetically modified organisms are created, such as by transferring an antibiotic-producing gene from a microbe to a cultivated plant.

Mayr also overlooked the possibility that introgressing genes might benefit a species that is expanding into new territory and gradually displacing the native species. Such genes can circumvent the need to evolve genetic adaptations that already exist in the native population. This argument was used by Greg Cochran, John Hawkes, and Henry Harpending a few years back, when they thought that the most recent microcephalin variant had introgressed from the Neanderthals. Another case of Neanderthal introgression seemed to be the diversification of European hair colors, via the MC1R gene:

A few years ago, I was thinking about Out-of-Africa, and it occurred to me that we probably picked up a lot of favorable alleles from Neanderthals [â¦] Looking at the new article in PNAS, I’d say that Bruce Lahn and company have probably found one.[â¦]

Now if the Neanderthals were really effectively isolated before we expanded into their territory, they’d have a lot of significantly different alleles. Some would have involved various kinds of regional adaptations, which might be a good thing to have in Eurasia. (MC1R?) But it’s entirely possible that some alleles solved adaptive problems that had existed in Africa as well – but solved them better.

Brains had expanded over the last half-million years in both Africans and Neanderthals, but it seems likely that those changes in size and structure were driven by different mutations, just as light skin in Europe and East Asia was. The Neanderthals had slightly bigger brains than Africans: obviously those brains were useful for _something_.

[â¦] So when you think about the cultural explosion that occurred shortly after we overwhelmed the Neanderthals (cave paintings, sculptures, new tools and weapons, all that jazz) – well, you have to wonder if assimilating a passel of adaptive alleles in a few thousand years, way more than the typical number that would arise and become established over such a short time span, didn’t give us a hell of a boost. There are signs of behavioral modernity a bit earlier in Africa – but those ostrich eggshells are dull as hell compared to Gravettian cave paintings. Expansion out of Africa must itself be a sign of new capabilities (I’d bet on sophisticated language) but you only see full-fledged behavioral modernity in the European Upper Paleolithic…

Since then, the Neanderthal genome has been fully reconstructed. The most recent microcephalin variant isnât on it. Nor are the European MC1R alleles. It seems that the best laid theories of mice and men gang aft agley.

No one likes to be proved wrong. Especially in public. For some time yet, certain people will be busy flogging the dead horse of Neanderthal introgression. Will they find anything? Undoubtedly. Anything to do with intelligence or artistic creativity? Probably not.

In sub-Saharan Africa, the main genetic change since the advent of modern humans has been the replacement of hunter-gatherers by farming peoples. This process began perhaps 6,000 to 7,000 years ago near the Nigerâs headwaters. A small core population of hoe farmers progressively expanded westward and southward, eventually occupying almost the whole of sub-Saharan Africa, except for a few marginal environments in central and southern Africa inhabited by Pygmy and Khoisan hunter-gatherers (Murdock, 1959, pp. 44, 64-68).

This new means of subsistence set off a cascade of social and, ultimately, biological changes. Year-round farming enabled women to provide for themselves and their children with little male assistance. Because more men could afford a second wife, the polygyny rate soared from around 5% of all sexual unions to 20-40%. Men now had to compete more fiercely against each other for access to women, the result being selection for greater stature, muscle mass, and bone strength. Many of these changes were and still are testosterone-mediated, i.e., through higher testosterone levels in young adult males or through testosterone receptors that bind the target molecule more effectively. Other changes may have been initially testosterone-mediated and then gradually hardwired (Frost, 2001; Frost, 2008).

A similar process has affected Amerindian farming peoples in the tropical New World, but not to the same degree. Among the YanomamÃ¶, an agricultural people of Amazonia, 10 to 20% of all men have more than one wife at any time (Hames, 1995). They are thus more polygynous than non-tropical Amerindians but not as polygynous as tropical Africans. Their bodies likewise donât show the same degree of robustness. Despite living in the tropics for millennia, they still look remarkably Arctic-adapted. As Holliday (1997, pp. 425-426) notes:

Despite having as much as 18,000 years of selection in environments as diverse as those found in the Old World, body mass and proportion clines in the Americas are less steep than those in the Old World. [â¦] In fact, as Hulse (1960) pointed out, Amerindians, even in the tropics, tend to possess some âarcticâ adaptations.

In Mesoamerica, farming began about 6,000 to 7,000 years agoâthe same time depth as in West Africa (although there is evidence of proto-agriculture going back to 12,000 years ago in West Africa). The difference between the two culture areas seems to have been more in the speed of co-evolution with this new means of subsistence, and especially with its social consequences. Briefly put, natural selection has had less raw material to work with among tropical Amerindians than among sub-Saharan Africans. Because modern humans entered the Americas from northern Eurasia, their genetic variability had been whittled down to the bare minimum for Arctic survival. They have thus evolved more slowly away from anatomical traits and behavioral predispositions that were originally meant for Arctic environments.

This is in contrast to the relatively rapid change in morphology that we see in sub-Saharan Africaâfrom a small, gracile, and almost childlike appearance, as typified by Pygmies and Khoisans, to a much larger and more robust body form. Just as radical has been the shift from a low rate of polygyny to a very high one.

Did evolution get a helping hand in sub-Saharan Africa? Was this change in physique facilitated by introgression of archaic genes? Perhaps Greg Cochran and John Hawkes were right after all. They just had the wrong example.

Take the example of tropical Amerindians. With the advent of year-round farming, they started down the same path that sub-Saharan Africans were taking on the other side of the Atlantic, i.e., more reproductive autonomy for women, lower cost of polygyny for men, higher incidence of polygyny, more male-male competition for access to women, etc.

But their progress down that path was slower. They had less of the relevant genetic variability for natural selection to act on. Meanwhile, another path opened up. This was the one leading to the formation of more complex societies, such as the Mayans, the Toltecs, and the Aztecs in Mesoamerica, and the Incas in South America. They were able to take that path because of their relatively low level of male-male rivalry. There was consequently less need for pacificationâa key precondition for development of complex social relations (i.e., State formation, specialization of labor, creation of roads and other public infrastructures, etc.).

This was not the case in sub-Saharan Africa. The high rate of polygyny, and hence male-male competition, became a serious impediment to the creationâand survivalâof complex societies.

The Geography of the Noosphere
Anatoly Karlin
• 345 Comments
← Encounters Between Modern Humans and Ar...Were There Neanderthals in Africa? →
Hide 18 CommentsLeave a Comment
"Were They Right After All?"
• 18 Comments
Commenters to Ignore
Commenters to ignore (one per line)

← Encounters Between Modern Humans and Ar...Were There Neanderthals in Africa? →
Current Commenter
says:
Current Date at Time Now
Leave a Reply - Comments on articles more than two weeks old will be judged much more strictly on quality and tone
Cancel Reply
Commenting Disabled While in Translation Mode