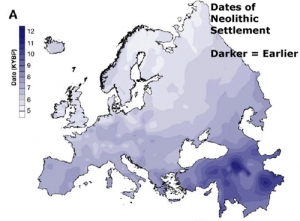 Between 9,000 and 3,000 years ago farming spread through Europe and replaced hunting, fishing, and gathering. Was this process just a change in lifestyle? Or was it also a population change? Did Middle Eastern farmers replace native Europeans?

For Greg Cochran, the answer is clear:

Increasingly, it looks as if the hunter-gatherers who lived in Europe at the end of the ice age have been largely replaced. Judging from all those U5 mtdna results from ancient skeletons, Iâd say that the hunters donât account for more than 10% of the ancestry of modern Europeans. (Cochran, 2011)

Actually, the U5 haplogroup remained common after the transition to farming. This was the conclusion of a study of 92 Danish human remains that ranged in time from the Mesolithic to the Middle Ages. The study found genetic continuity from late hunter/gatherer/fishers to early farmers:

The extent to which early European farmers were immigrants or descendents of resident hunter-gatherers (replacement vs. cultural diffusion) has been widely debated, and new genetic elements have recently been added. A high frequency of Hg U lineages , especially U5, has been inferred for pre-Neolithic Europeans based on modern mtDNA data, with Hg U5 being fairly specific to Europe. […] Our study therefore would point to the Early Iron Age and not the Neolithic Funnel Beaker Culture as suggested by Malmstrom et al. (2009), as the time period when the mtDNA haplogroup frequency pattern, which is characteristic to the presently living population of Southern Scandinavia, emerged and remained by and large unaltered by the subsequent effects of genetic drift (Melchior et al., 2010)

Thus, the sharp genetic divide was not between late hunter/fisher/gatherers and early farmers. It was between the earliest farmers and groups that had been farming for at least a millennium or so. The evidence is more consistent with natural selection than with population replacement.

But isnât mtDNA unresponsive to natural selection? Thatâs what I used to think. There is growing evidence, however, that some mtDNA loci respond to natural selection. In particular, some haplogroups seem to reflect a trade-off between thermogenesis and ATP synthesis (Balloux et al, 2009). This trade-off might explain differences in disease risk between different mtDNA haplogroups. Haplogroup U, in particular, is associated with a lower risk of glaucoma (Wolf et al., 2010). There also seems to be an age-related association between this haplogroup and risk of Alzheimerâs (Santoro et al., 2010).

If true, the decline of U-type haplogroups among early farmers may reflect the different patterns of physical activity between them and hunter/fisher/gatherers.

So was it cultural diffusion or population replacement?

The jury is still out, but the consensus is moving towards a position where Middle Easterners initially established pioneer farming settlements in central Europe but were over time largely replaced by native farmers. Rowley-Conwy (2011, p. S434) describes this new model:

Our explanations must now rest on two major foundations: most Neolithic genes were native, but the major domesticates were exotic. Small-scale rather than continent-wide migrations are the best way to integrate these into one model. Agriculture in a region may have been introduced by immigrants, but that does not mean that the immigrants carried mainly Near Eastern genes (Richards 2003; Rowley-Conwy 2004b; Zvelebil 2005). The LBK, for example, originated in the Carpathian Basin; the population that moved westward emerged there carrying a complex mix of European and Near Eastern mtDNA and no doubt picking up more as it moved.

There is evidence that these pioneer farming settlements assimilated local hunter-gatherers, especially women. In at least some cemeteries, the female skeletons are likelier than the male skeletons to have come from outside the local farming community (Rowley-Conwy, 2011, p. S439). Thus, over time, this recruitment of local hunter-gatherers would have steadily diluted the original gene pool, and this dilution would have been more advanced in later, secondary settlements that budded off from the early centers of colonization.

This process was hastened by the extinction of many of the early farming settlements. In northwestern France, the Villeneuve-Saint-Germain culture represented the furthest westward extension of these colonizing farmers. After a couple of centuries, however, it disappeared and was replaced by farming cultures of local origin (Rowley-Conwy, 2011, p. S439)

A Look at an Early European
Peter Frost
• 41 Comments • Reply
← How Late Is Too Late?Suicide and Inuit Youth →
Hide 18 CommentsLeave a Comment
"Were Native Europeans Replaced?"
• 18 Comments
Commenters to Ignore
Commenters to ignore (one per line)

← How Late Is Too Late?Suicide and Inuit Youth →
Current Commenter
says:
Current Date at Time Now
Leave a Reply - Comments on articles more than two weeks old will be judged much more strictly on quality and tone
Cancel Reply
Commenting Disabled While in Translation Mode