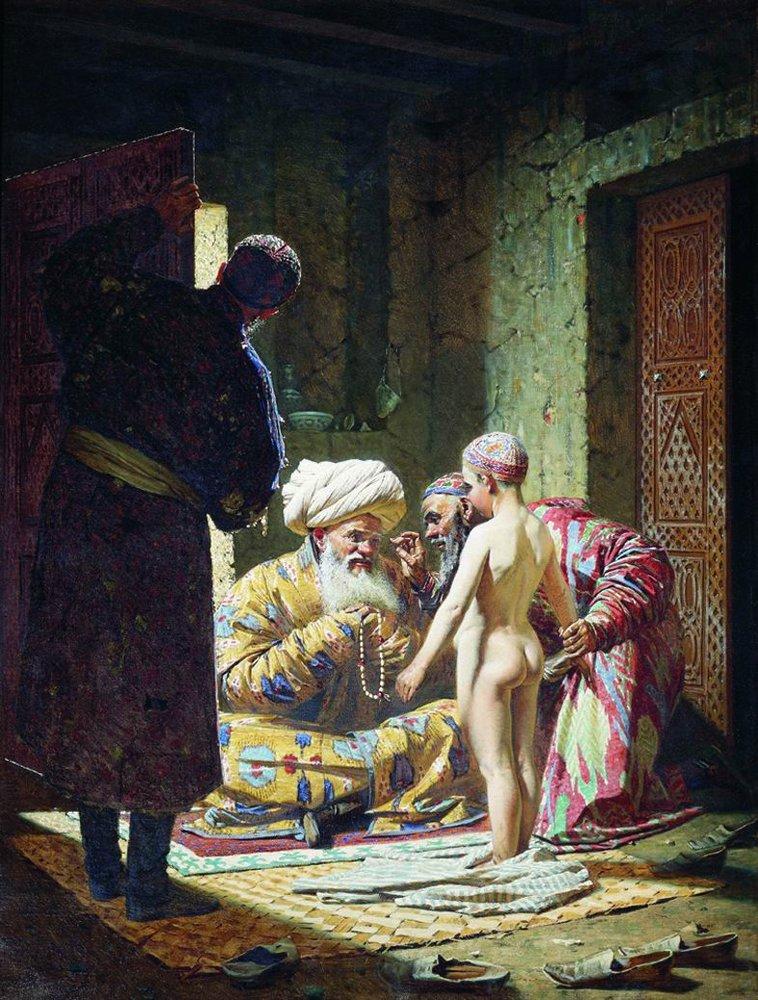 Although the slave raiders usually left infants behind, older girls and boys could be taken, if suitable for immediate sale (Selling a child-slave, painting by Vasily Vereshchagin â source).

Europe used to export slaves to the non-European world. Such a statement would astonish most people today, even among the university-educated. Surely, those slaves were few in number, certainly fewer than the African slaves taken across the Atlantic. And surely all of that happened long before the Atlantic slave trade.
Well, no and no. The numbers were huge. At the height of that trade, over 10,000 Eastern Europeans were enslaved each year between 1500 and 1650 for export to North Africa, the Middle East, and South Asia â¦ a total of 1.5 million. By comparison, the Americas received fewer than 300,000 African slaves before 1600 and another 1.5 million between 1600 and 1700 (Fisher, 1972; Kolodziejczyk, 2006). Western Europeans were likewise enslaved and taken abroad, mainly to North Africa. How many? More than 1 million between 1530 and 1780 (Davis, 2004).

And, yes, those European slaves were going across the Mediterranean while African slaves were going across the Atlantic. Officially, the âharvestâ ended with the Treaty of Carlowitz (1699), which called on the Ottoman Empire to stop all slave raiding (Abou-el-Haj, 1969). Unofficially, it did not end on a large scale until Russia annexed the Khanate of the Crimea in 1783âa quarter-century before the abolition of the slave trade in the British Empire. Fair-skinned women were thereafter exported on a smaller scale until the late 19th century, mainly from the Caucasus.

Differences from the African Slave Trade

The white slave trade differed from its black counterpart in a few key ways. In Africa, a slave-trader typically purchased prisoners of war who had already lost their freedom through local conflicts. In Europe, he played a more active role.

This was the case with the Crimean Tatars who lived under Ottoman protection in the Black Sea region. Beginning in the mid-15th century, they would fan out each year on raids into what is now Ukraine and southern Russia. These raids served no military purpose, being driven by the profits to be made in the slave trade:

[â¦] most of these raids do not appear to have had any military purpose and, moreover, had little or no relationship to Ottoman policy. They were an integral part of the Crimean economy, a “harvesting of the steppe” as the Tatars explained it. (Fisher, 1973)

In a royal [Polish] document dated 1555 we read: âThere are many Turks who send Tatars supplied with their horses and armour into our domains, and later share the profits in the fieldsâ, this last expression referring to the fact that the division took place far from the eyes of the Ottoman police and customs officers who might have viewed negatively the breaking of the peace treaty or the failure to pay taxes due by those involved in the slave trade.

Notwithstanding such efforts to escape the tax duties, the Ottoman state was among the principal share holders in the Black Sea slave trade. According to Pretwicz, the sultan’s income from the slave trade in Akkerman and Ocakiv (Turkish ÃzÃ¼ ) amounted to a few 100,000 akÃ§e a year. Strikingly similar are the numbers for Caffa established by Inalcik on the basis of Ottoman tax registers. The slave tax collected in Caffa amounted to 620,000 akÃ§e in 1520 and 650,000 akÃ§e in 1529.26 The same author estimates the total state revenue from the slave trade as approaching 100,000 gold florins (i.e. circa 6,000,000 akÃ§e) in the mid 16th century. (Kolodziejczyk, 2006)

The white slave trade was different in a second way. Most black slaves were destined for physical labor on plantations. There was thus a stronger preference for men over women. In contrast, white slaves were used more for domestic service, particularly concubinage and marriage. There was thus a stronger preference for women, as reflected in the sex ratio of the slave population: black slaves were predominantly male, and white slaves predominantly female. Furthermore, while blacks of both sexes sold for the same price, Russian and Circassian women fetched 50% more than men of the same nationality. (Verlinden, 1977, pp. 211, 224, 306, 315, 330-331, 460, 517; see also Frost, 1990). This price differential continued until the end of white slavery. A mid-19th century report from Turkey states that a âtrained, strong, black slaveâ would cost 4,000 to 5,000 piasters, whereas âwhite slave girls of special beautyâ were worth 50,000 piasters or more (Lewis, 1990, p. 13).

Slave trading existed in many parts of the world and during many historical periods. Trading in fair-skinned women, however, was much more limited in space and time. There is no evidence of it during Roman times, at least not on a large scale. If a Roman notable wanted a bride with milk-white skin, he would look among the families in his entourage and not among the slaves at the local market. After all, a native-born woman of good family would bring a dowry and valuable family connections.
All of this changed in the 7th century with the dramatic expansion of the Arab world into the Middle East and thence into North Africa and Spain. The new elites were darker in skin tone and, also, more polygynous. It was these two factors that would fuel demand for fair-skinned brides and concubines.

A third factor was of course the relative weakness of European societies, particularly during the Dark Ages that followed the collapse of the Roman Empire. With the gradual strengthening of European states, this trade increasingly took the form of hit-and-run raids that focused on poorly defended areas, such as the plains north of the Black Sea. This raiding would finally end only with European annexation of those âstatesâ that earned most of their income from the slave trade, such as the Khanate of the Crimea and the Beyliks of North Africa.

Would this trade have continued if Europe had remained weak? Probably. Would it have eventually become more humane and sustainable? Doubtful. Though often described as âharvesting,â there never was any effort to make it sustainable. A Tatar raid typically left behind the old and the very young, as a Polish report noted: âIn the fields and forests they [i.e. the Tatars] left behind over 200 poor children whom they could not take along since everyone preferred to take horses and oxen rather than childrenâ (Kolodziejczyk, 2006).

The result was widespread depopulation of much of Ukraine and southern Russia, which in turn forced the Tatars to raid farther and farther afield, even as far as present-day Poland. Demographic wastage was considerable:

The Crimean Tatar society was based on raiding the neighbouring Slavic and Caucasian sedentary societies and selling the captives into the slave markets of Eurasia. Approximately 75 percent of the Crimean population consisted of slaves or freedmen, and much of the free population was highly predatory, engaged either in the gathering of slaves or in the selling of them. It is known that for every slave the Crimeans sold in the market, they killed outright several other people during their raids, and a couple more died on the way to the slave market. (Britannica, 2013)

There was no resource management, only resource depletion (Wikipedia, 2013). As Kolodziejczyk (2006) notes:

We should not close our eyes to the consequences of depopulation, affecting large Slavic territories in Eastern Europe. If an “alternative” history of Ukraine were imaginable, perhaps the country’s historical development would have looked different had it not been for the slave trade.

Ukraine is considered to be part of âOld Europeâ yet the plains north of the Black Sea were finally opened for settlement at about the same time as the plains of the United States and Canada.

Kolodziejczyk, D. (2006). Slave hunting and slave redemption as a business enterprise: The northern Black Sea region in the sixteenth to seventeenth centuries, Oriente Moderno, 86, 1, The Ottomans and Trade, pp. 149-159.

The Can of Worms
Israel Shamir
• 169 Comments • Reply