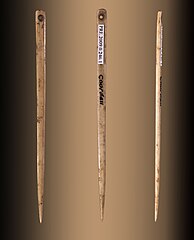 As early modern humans spread farther north, they entered more challenging environments. This was particularly so when they left the boreal forests and entered the open steppe-tundra that covered much of northern Eurasia. Food was plentiful but largely took the form of meatâherds of reindeer and other herbivores. With few plant foods to gather, women took on other tasks: meat processing, shelter building, and garment making. Men also had to make the most of their hunting successes, since no other food was available during lean times.
Necessity is the mother of invention. Northern hunting peoples had to create a wider range of new and complex tools, as well as mental simulations of how their actions would play out in the future:

The technology of recent hunter-gatherers is also influenced by temperature and diet. Both the diversity of tool types and the complexity of individual tools and weapons [â¦] increase as effective temperature and the percentage of plant foods in the diet decline [â¦]. This apparently reflects the need for greater foraging efficiency in habitats where resources are available for limited periods of time. Recent hunter-gatherers in cold environments also tend to make increased use of storage technologies and untended facilities (e.g., traps and snares). The former represent another adaptive response to seasonal variations in resource availability, while the latter reflect an efficient approach (i.e., reduced mobility) to collecting unpredictable and widely dispersed resources [â¦]. Finally, modern hunter-gatherers in northern environments produce relatively complex technology for heat conservation and cold protection (e.g., tailored fur clothing).(Hoffecker, 2002, p. 10).

On the frozen steppe-tundra, each base camp became a center of activity for production, processing, and storage. Deep storage pits were dug into the permafrost for meat refrigeration. Hand-powered rotary drills made their appearance. We find âtraces of fired ceramic technology, including remains of kilns heated to as much as 800 degrees C.â There is also evidence of woven textiles, as well as eyed sewing needles and other fine instruments for the making of tailored clothing (Hoffecker, 2002, p. 161, 107).

Much of this activity was driven by the need to do a lot in a short time:

In such [non-tropical] areas, one or two seasonally abundant resources may be relied on to produce the critical storable surplus for the lean seasons. This would require short periods of intensive harvest and precise scheduling during those times of the year when these resources were available. In such âtime-stressed environmentsâ, time was at a premium and hunter-gatherer societies responded by developing time-saving devices: by budgeting their time and by preparing in advance more sophisticated, but also more complicated tools designed for the specific tasks involved. The development of capture facilities, such as pits, traps, weirs, and nets can be also seen as time-saving devices. Another technological requirement for effective exploitation of seasonal resources consists of storage. [â¦] These technological developments, combined with the development of the microlithic industry, could be called, with some justification, the original industrial revolution. (Zvelebil, 2009, p. 170)

Did these new cognitive demands have an evolutionary impact? Did they select for certain mental capacities over others? Piffer (2013) has addressed these questions by seeing how hunter-gatherers differ from farming peoples in alleles at COMT, a gene linked to executive function, working memory, and intelligence:

[â¦] hunter-gatherers living at high latitudes (Inuit) show high frequencies of the Met allele, possibly due to the higher pressure on technological skills and planning abilities posed by the adverse climatic conditions near the North Pole.

Modern humans arose in Africa, and founded the first civilizations in the Middle East. These two milestones are separated by the development of a new mental toolkit, i.e., an improved ability to imagine how resources can be used collectively not only in the present but also over long periods of time in the future. Surely, then, this mental toolkit must have arisen in the same geographic area. Wouldnât that be the simplest answer?

Sometimes the simplest answer is not the right one. Evolution can appear unnecessarily complicated at times, and this is a fine example. Although the new mental toolkit was initially an adaptation to harsh semi-Arctic conditions, it would later prove useful in warmer climes. We see this in an apparent series of demographic expansions out of the northern tier of Eurasia, beginning as early as 15,000 years ago, as indicated by the existence of the Eurasiatic language macrofamily and the more hypothetical Borean macrofamily. Today, most of the human gene pool has its origins in people who once roamed the northern wastes of Eurasia.

Piffer, D. (2013). Correlation of the COMT Val158Met polymorphism with latitude and a hunter-gather lifestyle suggests cultureâgene coevolution and selective pressure on cognition genes due to climate, Anthropological Science, 121, 161-171.https://lesacreduprintemps19.files.wordpress.com/2014/01/correlation-of-the-comt-val158met-polymorphism-with-latitude-and-a-hunter-gather-lifestyle-suggests-culturee28093gene-coevolution-and-selective-pressure-on-cognition-genes-due-to-climate.pdf