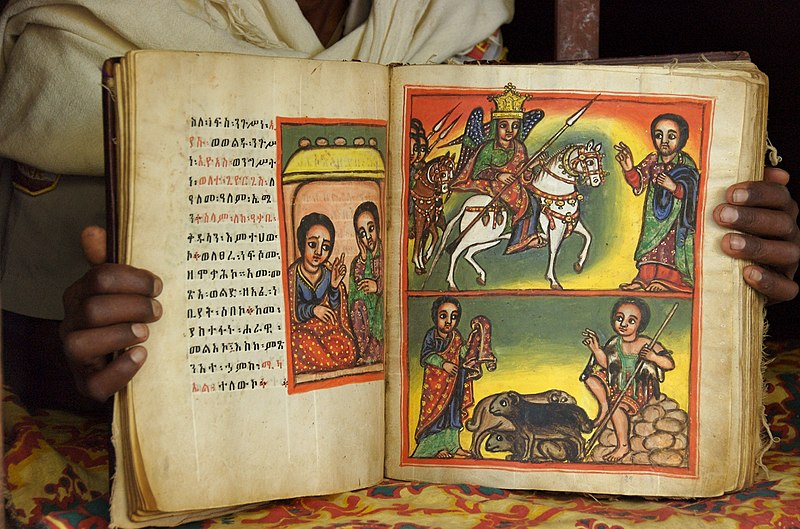 Ethiopian manuscript paintings (source: A. Davey). Ethiopians have a self-image that is lighter-skinned than their actual selves. If the prevalence of SLC24A5 is higher in Ethiopia than the degree of admixture from lighter-skinned peoples across the Red Sea, this discrepancy may be explained by social selection for lighter skin.

Greg Cochran has been asking why the âEuropeanâ allele for SLC24A5 has been so successful, not only in Europe but also elsewhere. He seems to be hinting that this allele has a selective advantage that is unrelated to skin color.

SLC24A5 is one of three genes involved in the whitening of European skin, the other two being SLC45A2 and TYRP1. This whitening occurred over a relatively short time and long after the entry of modern humans into Europe some 40,000 years ago. Sandra Belezaâs team estimates that all three genes âwent whiteâ between 11,000 and 19,000 years ago (Beleza et al, 2013). Victor Canfieldâs team, working only with SLC24A5, estimates between 7,600 and 19,200 years ago (Canfield et al., 2014).

So, yes, white European skin is not an adaptation to weaker sunlight; otherwise, it would have evolved much earlier. Are we looking at some pleiotropic effect then? In that case, this effect would involve not only SLC24A5 but the other two genes as well. Perhaps, but Iâd like to see the evidence.

How then do we explain the much greater geographic and historical success of this allele? The answer is part of the larger one of why lighter-skinned folks have done better than darker-skinned folks. Mean temperature is inversely correlated with technological complexity, even going back to the hunter-gatherer stage of cultural evolution. This is partly because colder environments created a greater need for heat conservation (by means of tailored clothing and insulated shelters) and partly because their food resources were more dispersed and typically available for short periods of time. There was thus strong selection in such environments for time budgeting, forward planning, and the ability to manage storage technologies (ice cellars) and untended facilities (traps, snares). Northern hunters were pre-adapted for technological complexity and thus better able to exploit the sort of complex cultural environments that developed much later in time (Hoffecker, 2002, pp. 6-12).
Is this the whole story? You point to Ethiopians as an example where SLC24A5 seems to be present at a higher frequency than Caucasian admixture. This discrepancy can probably be explained by social selection for lighter skin, as indicated by an Israeli study that found light-skin preference among Falasha children (Munitz et al., 1987). This preference may be learned, although there is evidence that people are predisposed to associate lighter skin with certain good qualities (as a result of a mental algorithm that uses skin tone for identification of women and young infants) (Frost, 2011). For whatever reason, social selection for lighter skin is a reality in Ethiopia, and it probably has had some impact on the prevalence of SLC24A5.

Question from âRSâ: Sexual selection, especially sexual selection of women, occurs under very limited circumstances. So you are equally attracted to all women?
Sexual selection is not the same thing as sexual preference. In other words, what you prefer is not necessarily what you will get. It all comes down to the law of supply and demand.

Sexual selection occurs when too many of one sex have to compete for too few of the other. Normally, the males have to compete for the females. The reverse is rare in nature. It happens when (1) males die much earlier than females do and (2) the costs of providing for a second mate are too high for almost all males. In human hunter-gatherers, the ratio of men to women on the mate market declines as one moves away from the equator. It reaches its lowest point in open steppe-tundra environments, where almost all food is obtained by men through hunting and where male mortality is high because men have to pursue mobile herds of game over long distances in a cold environment that offers few alternate sources of food.

Steppe-tundra covered most of northern and eastern Europe during the Late Pleniglacial (25,000 to 10,000 BP). I use the term âlast ice ageâ in order to be better understood. There was a series of ice ages during the Pleniglacial (70,000 to 10,000 BP), but modern humans had to adapt only to the last one. To date, it looks like the most visible features of Europeans (white skin, multi-hued hair and eyes) evolved during the time window of the Late Pleniglacial. If the estimates by Beleza and Canfield are to be believed, the time window is somewhere between 20,000 and 10,000 BP.

These estimates seem to conflict with the recent findings of brown-skinned Mesolithic Europeans from Spain (7,000 BP) and Luxembourg (8,000 BP). I would argue that the changes to hair, eye, and skin color took place within a relatively restricted geographic area (essentially the plains of northern and eastern Europe) and later spread outward. Itâs silly to argue that these changes must have originated in the Middle East, since the Middle East was inhabited by an African-like population until at least 12,000 BP. This population (the Natufians) shows no biological continuity with later Middle Easterners.