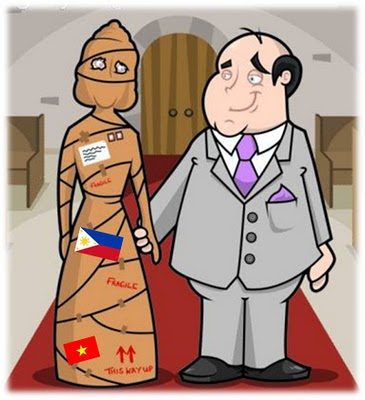 Cartoon lampooning the traffic in mail-order brides (source). About 40% of married men in rural South Korea have wives of foreign origin.

Until recently, South Korea had no ethnic minorities. Nor did it have a history of being a colonial power. While slavery did exist, the slaves were not from elsewhere.

Today, however, the country is in the throes of demographic change. In the late 1980s, it began to open its borders to immigrants, initially diaspora Koreans from Manchuria, Uzbekistan, and other sources. Since the mid-1990s, the zone of recruitment has been extended to the Philippines, Vietnam, Indonesia, Bangladesh, Sri Lanka, Pakistan, and even countries as far afield as Nigeria (Kim, 2004).

How much has immigration changed South Korea? In 2010, foreigners officially made up 2.6% of the population, and this proportion is set to reach 9.2% by 2050 (Park, 2011; Yoon et al., 2008). Like all statistics, these figures should be viewed with caution. For instance, a third of all foreigners may be diaspora Koreans, whose cultural impact is much less than that of other immigrants.

On the other hand, the official statistics greatly understate the impact of immigration in at least three ways. First, the term âforeignerâ doesnât mean âforeign-born.â It refers only to those residents who havenât received South Korean citizenship yet. When a foreigner becomes a citizen, he or she disappears from the statistics and is deemed to be sociologically the same as any other Korean. No statistics are kept on ethnic origin.

Second, the official statistics exclude Korean-born children of foreigners. This group is far from negligible, especially in the case of mail-order brides from southeast Asia and elsewhere:

These children are most often born to mothers from countries with higher fertility, and such countries also differ more from Korea in terms of culture, religion, and ethnic makeup.

Third, the official statistics exclude illegal immigrants, who are estimated to make up half the total immigration intake (Moon, 2010).

So how much is immigration changing South Korea? There is no exact answer, but an exact one may be unnecessary. When American-style open borders combine with East Asian fertility (1.2 children per woman in 2010), the future is a foregone conclusion.

How will this future play out? Will South Korea avoid the problems of ethnic conflict and discrimination that other countries have experienced? There are already growing concerns. Lim (2010) deplores the high dropout rate among biracial children and suggests they âface a future as the countryâs permanent, racialized underclassâ (Lim, 2011).

Poor academic performance does seem to be a problem among Korean children with at least one foreign-born parent. The cause is widely said to be social exclusion.

Because their mothers have difficulty in speaking and writing Korean, these children may be making slow progress in language development in comparison to the Korean children. They then are also likely to be seen as having learning difficulties and as being less adapted to school life with friends due to such delayed development in language and cultural understanding in the home (Sul, G.-S. Han, and J.-R. Lee 2003; Oh 2005; Cho 2006). As a consequence, the children confront difficulties at school, often being viewed as learning-disabled. (Kang, 2010)

The kind of âlearning-deficiencyâ treatment leads them to drop out of school and discourages their enrolment at higher levels of schooling. The drop-out rate among mixed-blood youths is estimated at 9.4% in elementary schools and 17.5% at the secondary level, compared with less than 3% among ordinary Korean youths (Docuinfor 2004). These youngsters may be alienated from mainstream society, feeling prejudice and discrimination, and frustration about the lack of positive future prospects. (Kang, 2010)

In short, it is argued that these children fare worse in school because they improperly learn the Korean language at home. This in turn leads to poor social skills and rejection by peers.

If the above explanation is correct, these children should do worse in subjects that demand much social interaction and language use. Conversely, they should do better in subjects that require abstract skills, like mathematics, or memorization of names and dates, like social studies. This is, in fact, the pattern we see among children of East Asian immigrants in North America.

But this is not really the pattern we see among children born in South Korea to non-Korean mothers:

The learning deficit seems to be strongest in those subjects that require the most abstraction and memorization. These learning skills, however, are the pillars of Korean education.

It will thus not be enough to mandate social inclusion. The educational system itself will have to change:

Traditional forms of education which reflect little more than âcrammingâ knowledge or fact are inadequate and counterproductive for children with different cultural needs (Kang, 2010).

Should âcrammingâ be abandoned in the new Korea? It depends on the kind of new Korea one wants. Keep in mind that the country has few natural resources. Its most important resource is its people, specifically a workforce that can âcramâ knowledge. To the extent that it loses this resource, it will become poorerâand probably less interesting for immigrants.

Moon, S. (2010). Multicultural and Global Citizenship in the Transnational Age: The Case of South Korea, International Journal of Multicultural Education, 12, 1-15.