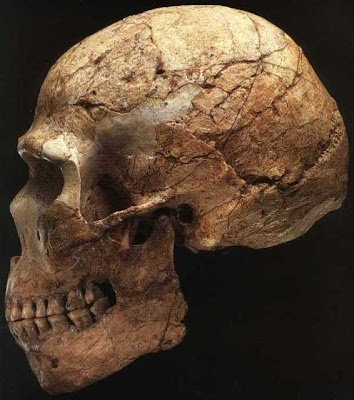 Skhul V â one of the Skhul-Qafzeh hominins. Were they the middleman between Neanderthal genes and the modern human genome?

When I initially published my last post, I pooh-poohed the rumors about the reconstructed Neanderthal genome. How could modern humans have Neanderthal DNA when no such admixture appeared in previous analyses of mtDNA, dentition, and noncoding DNA? Any Neanderthal admixture would have to be less than 1%.

I then logged on to Razib Khanâs site. The news had just broken: modern humans outside Africa are 1 to 4% Neanderthal. I hurriedly rewrote my post and spent the rest of the day eating crow.

In retrospect, I now realize I had put too much faith in the existing data. I had also ignored the warning signs. The HBD community correctly decoded the silence that had fallen over PÃ¤Ã¤boâs research team, as well as a remark made by Linda Vigilant.

Despite the crow-phagia, this is good news. It means the end to a long and bitter conflict between proponents of two models of human origins: âOut of Africaâ versus multiregionalism. Anthropologists may still disagree, but the room for disagreement has greatly shrunk from what it was only a week ago. We can now move on.

The winning model is a weak version of Out of Africa. Modern humans are largely descended from a series of population expansions that began around 80,000 years ago somewhere in eastern Africa and culminated c. 60,000 BP in a âbig bangâ that would create 96-99% of the gene pool outside Africa. The remaining 1-4% came from archaic Europeans and Asians, i.e., Neanderthals in Europe and West Asia, and other hominins elsewhere (Almas in Siberia? Hobbits in southeast Asia?). This admixture seems to have occurred in two stages: an early one in the Middle East, when modern humans began spreading out of Africa, and a later one, when modern humans began to spread from Asia to Oceania (Dalton, 2010). Curiously, the admixture looks Neanderthal in both cases.

Did this admixture contribute anything useful? We still donât know. Some academics had identified the new variant of the microcephalin gene as being probably of Neanderthal origin, but this variant is absent from the reconstructed Neanderthal genome. To date, PÃ¤Ã¤boâs team is of the opinion that âthe Neanderthal DNA does not seem to have played a great role in human evolutionâ (Wade, 2010).

There are several possible explanations:

1. Noise in the data obscures the higher level of Neanderthal admixture in present-day Europeans. The picture should become clearer once we have sequenced 100% of the Neanderthal genome, and not the current 60% (Richard Green in an interview on CBC).

5. Neanderthal genes entered modern Eurasian populations indirectly, via an intermediate Middle Eastern population that already had Neanderthal admixture (because of prolonged contact) while being fairly close to modern humans in appearance and behavior. Modern humans may thus have more readily intermixed with them but not with Neanderthals in Europe. The latter were so different in appearance and behavior that admixture would have been minimal (my idea).

Iâm inclined toward the last two explanations. Explanation #4 would explain why the later admixture in Asia/Oceania seems to have been as âNeanderthalâ as the early admixture in the Middle East. Unfortunately, to test this explanation, we must first reconstruct the genome of archaic humans from the Asia/Oceania transition zone. This will be difficult, if not impossible, given the accelerated degradation of DNA in the tropics.

Explanation #5 is also tempting. Not long before modern humans began spreading out of Africa, the Middle East was home to a population with both modern human and Neanderthal characteristics, as attested by remains from Skhul and Qafzeh in northern Israel. These hominins first appeared in the Levant some 120,000 years ago, perhaps as part of an earlier out-of-Africa expansion into south Asia. Their technology was Mousterian and Neanderthal-like, but their anatomy was relatively modern with some archaic features (Kidder et al., 1992; Pearson, 1998). These âalmost-modernsâ existed on the periphery of a range centered on the African continent. Only a bit farther north were the Neanderthals of Europe and West Asia.

When the climate cooled during the Early Pleniglacial (70,000-55,000 BP), the southern limit of the Neanderthal range shifted accordingly. Neanderthals then occupied the Levant until the arrival of modern humans some 50,000 years ago (Grun & Stringer, 1991; Schwarcz et al., 1989; Valladas et al., 1987).

What happened to the Skhul-Qafzeh hominins? They probably moved farther south, perhaps to the Hejaz. Such a location would have been athwart the main line of expansion of modern humans as they spread out of Africa. Unfortunately, despite many interesting sites, there has been no dating so far of early human occupation in Saudi Arabia (Petraglia & Alsharekh, 2003).

A Look at an Early European
Peter Frost
• 41 Comments • Reply

← Ask the RhinoArchaic Admixture in Africans →
Current Commenter
says:
Current Date at Time Now
Leave a Reply - Comments on articles more than two weeks old will be judged much more strictly on quality and tone
Cancel Reply
Commenting Disabled While in Translation Mode