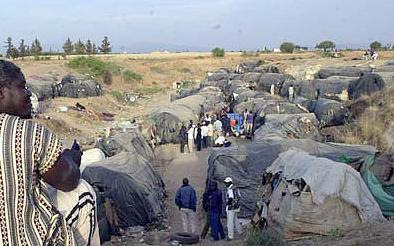 The 21st century will see a surge of emigration from sub-Saharan Africa that will eclipse the one that used to pour out of Europe into the Americas, southern Africa, Siberia, and Australia. Millions upon millions will be claiming new lands for themselves, just like Europeans of another age.

The biggest surprise will be their push into a wide range of territories, and not simply the homelands of the former colonial powers. Remember, this is not a game of âtit for tat.â It is not some kind of just recompense for colonial wrongs, although its enablers will portray it as such. This is a game that predates our notions of justice and even humanity itself. In fact, it is as old as the oldest life forms.

One front of this population expansion will be Algeria, a Mediterranean country immediately north of sub-Saharan Africa. Until recently, it was a country of emigration, not immigration, its population growing almost entirely through natural increase. The last decade, however, has seen its demography become more and more âEuropeanâ. On the one hand, the fertility rate has fallen to 2.27 children per womanâjust enough to replace the existing population. On the other, immigration has become a significant source of population growth.

The current influx began in the mid-1990s. Initially, it flowed into the Saharan portion of Algeria from the neighboring states of Niger and Mali. Over the past decade, its sources have broadened to include all of West Africa and even Central and East Africa. This âtrans-Saharanâ immigration is also spreading to the north of the country, i.e., the Mediterranean coast:

Further north, in Alger, between the migrants in the old Arab city (the Casbah), the old colonial center (the Port-SaÃ¯d quarter essentially), and those in the peripheral quarters (Dely Brahim, ChÃ©raga), and even though the migrants keep a very low profile, there are at least 15,000. In Oran, Algeriaâs western metropolis, though closer to the border, there are several thousand (between 3,000 and 5,000) whereas for Maghniyya, a town next to northern Morocco, [â¦] the member of the legislative assembly for that town gives a figure of 3,000 migrants in a camp nearby (Oued Jordi) and 4,000 others in the town itself. (BensaÃ¢d, 2009)

This is something new for Algerians:

The phenomenon of clandestine immigration in Algeria is relatively new for a country like our own, which has become, in only a few years, one of the desirable destinations for nationals of sub-Saharan countries, with some of them attempting to settle here. (Algerie-dz.com, 2005)

At first, it was thought that they were simply passing through on their way to Europe. Many were, but many more saw Algeria itself as their new home:

Some might think that these Black African immigrants are just passing through Algeria, while they wait to find a way to enter Europe. But in reality they say they have found what they want in Algeria. As proof, they have moved in with their families. (Algerie-dz.com, 2005)

Last year, the national gendarmerie estimated that 70% of all clandestine immigrants intend to settle in the country permanently (Algerie360.com, 2009).

Efforts are certainly being made to control the influx. BensaÃ¢d (2009, p. 18) reports that 3,000 migrants are being expelled per month at Tin Zouatin, on the Mali border. And Tin Zouatin is just one of three âexpulsion points.â Even though Algeria has signed all of the international conventions on refugees, it has never granted anyone refugee status (BensaÃ¢d, 2009, p. 20)

Yet the influx continues and anti-immigration sentiment is rising among Algerians. It is unclear, however, how this sentiment will translate into political action. The current administration is committed, at least superficially, to a paradigm that took shape during the independence struggle of the early 1960s, i.e., international socialism, pan-Africanism, and Third Worldism. There is a political oppositionâthe Islamistsâbut they too are committed to a universalist paradigm that could hardly be used to mobilize opposition to immigration. Remember, most of the trans-Saharan immigrants are also Muslims.

Algeria is thus caught in an ideological gridlock that will probably allow the influx to continue, at least for now. Will we eventually see population replacement? Such a scenario might seem unlikely. After all, Algeriaâs fertility rate has not fallen below the replacement level and its gendarmerie has shown a degree of seriousness in dealing with clandestine immigration that would put many Western countries to shame.

Against this, it should be pointed out that the fertility rate has already fallen below replacement in neighboring Tunisia (1.84 children per woman), and this decline will likely spread to the rest of North Africa. Meanwhile, immigration cannot help but increase. First, there is the long porous border with sub-Saharan Africa, particularly with those regions that now have the highest rates of natural increase on the continent. Second, production of oil and natural gas will spur economic growth and create employment for immigrant workers. Third, the Algerian leadership is committed to maintaining at least an outward show of pan-African solidarity. This might explain the secrecy that seems to surround most immigration data (BensaÃ¢d, 2009, pp. 17-21). Too much information could inflame public opinion or, as the demographer Ali BensaÃ¢d puts it, force the Algerian authorities to address âa new societal reality for which they have no legal and social answers.â

So, yes, if current trends continue, we will eventually see population replacement. This process will be fueled not only by high levels of African immigration but also by the youthful age structure and high fertility of the immigrant population, which may pass the one-million mark as soon as five years from now. At that point, immigration control will start to break down, with clandestine immigrants simply melting away into the existing community. Algeria too will be entering the âage of interesting times.â