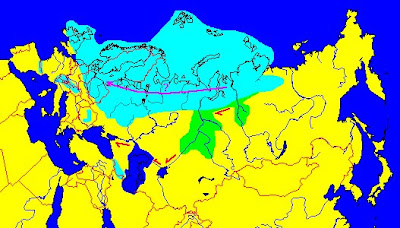 With the onset of the glacial maximum c. 20,000 years ago, and the ponding up of the Ob River, humans circulated less easily from one end of the steppe-tundra belt to the other. This barrier separated ancestral Europeans from ancestral East Asians.

Outside Africa, people seem to have the same amount of Neanderthal admixture, be they Europeans, East Asians, or Papua/New Guineans. How come?

Perhaps the admixture was a one-time event that occurred just as modern humans began to spread out of Africa and into the Middle East. Only there did they encounter an âalmost-modernâ population that had long bordered and probably intermingled with the Neanderthals to the north. Our ancestors thus received Neanderthal admixture indirectly, via a partially hybridized population. As they spread beyond this transitional zone, they encountered archaic hominins that differed much more from them in appearance and behavior. Admixture accordingly decreased.

This leads us to an alternate explanation: all of the archaic hominins throughout Eurasia, including the Neanderthals, were related to each other. The second admixture looks Neanderthal because it came from a related archaic population somewhere on the Asia/Oceania boundary.

Did archaic admixture also occur separately in Europe and East Asia? Not if we believe the Joyce and Long study. Moreover, there is growing evidence that ancestral Europeans and ancestral East Asians were one and the same people until 22,500 years ago, long after the Neanderthals had gone extinct (Laval et al., 2010). This might seem surprising. Modern humans were already in Eurasia by 40,000 BP, if not earlier. How could these early Eurasians have stayed together as a single breeding population for the next twenty thousand years?

They didnât. The modern humans who initially settled the south and east of Asia were later pushed out and/or absorbed. Today, their descendants are limited to a few relic groups: the Veddas of Sri Lanka, the Andaman Islanders, the Semang of the Malayan Peninsula, and the Aetas of the Philippines.

Present-day Europeans and East Asians descend largely from a small nomadic population that once roamed Eurasiaâs northern tierâa belt of steppe-tundra that stretched from southwestern France to Beringia during the last ice age. This population then split in two about 20,000 years ago at the glacial maximum: on the one hand, an immense ice sheet spread south and east from Scandinavia; on the other, large glacial lakes formed along the Ob (Rogers, 1986; Crawford et al, 1997). Chronologically, this barrier to east-west gene flow matches the dating by Laval et al. (2010) of the split between ancestral Europeans and ancestral East Asians.

Even before the ice age ended some 10,000 years ago, these two northern groups had been spreading south, initially into the Middle East on the west and into the Americas on the east. Later expansions encompassed not only the rest of Asia but also North Africa and Oceania. Today, a common northern origin is suggested by linguistic similarities. There seems to be a core Eurasiatic macrophylum, principally Indo-European, Uralic, and Altaic, that stretches across the northern tier of Eurasia. To the south are other related language families, principally Afro-Asiatic, Dravidian, and Amerindian, that have nonetheless undergone more change, due to linguistic âfounder effectsâ or to lexical and grammatical borrowing from pre-existing southern languages (Rogers, 1986; Wikipedia â Eurasiatic languages, Nostratic languages).

But how did these northerners replace humans who were not only âmodernâ like themselves but also native to southern latitudes? After all, the southerners were playing on their own turf. They had been adapting to their own climate and ecosystem for much longer. What happened to the home team advantage?

Some answers are offered by Hoffecker (2002, p. 135). Among early modern humans, tools and weapons were more complex at arctic latitudes than at tropical latitudes. âTechnological complexity in colder environments seems to reflect the need for greater foraging efficiency in settings where many resources are available only for limited periods of time.â Arctic humans coped with resource fluctuations and high mobility requirements by planning ahead and by developing untended devices (e.g., traps and snares) and means of food storage.

In addition, these increased cognitive demands fell on both men and women. Paternal and maternal investment were much more equal than in the tropical zone, where women could provide for their families year-round with less male assistance (Kelly, 1995, pp. 268-269; Martin, 1974, pp. 16-18). Indeed, because the arctic zone compelled men to shoulder most of the food provisioning, women were free to enter a new range of tasks: food processing (e.g., butchery and carcass transport); shelter building; garment making; leather working; transport of material goods; etc. (Waguespack, 2005). It was this technological revolution that ultimately led to what we now call âcivilizationâ (Frost, 2008).

Of course, none of this could have been foreseen at the time. Northern Eurasians were simply pre-adapted for what came later. They were especially able to exploit the shift to agriculture and the ensuing need for seasonal planting, harvesting, and food storage, as well as more complex forms of social organization. This was their competitive edge over humans farther south.

← Archaic Admixture in AfricansThe Use and Abuse of Doll Tests →
Current Commenter
says:
Current Date at Time Now
Leave a Reply - Comments on articles more than two weeks old will be judged much more strictly on quality and tone
Cancel Reply
Commenting Disabled While in Translation Mode