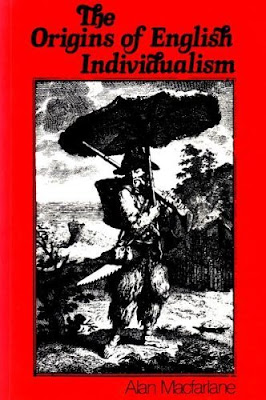 Did the end of the Middle Ages bring a rapid shift to individualism in English society? Or was something already going on beforehand?

For most of human history and prehistory, our lives were based on kinshipâeconomically, socially and even spiritually. Kinship determined who provided whom with the basics of life: food, shelter, and clothing. And kinship decided whom we trusted and whom we didnât, who was âusâ and who was âthem.â

That worldview lingers on in our language. We still talk about âfamily,â âbrotherhoodâ and ânationâ but these words have lost their original meanings. A nation, for instance, is no longer an ethnic community with a shared historical and cultural heritage. Itâs now an administrative unit. The word itself has become more or less synonymous with âcountry.â

As for âfamily,â even that final holdout seems increasingly irrelevant.

One of my aunts died recently, and my brother phoned her sister to break the bad news. She appreciated the phone call but said it wasnât necessary. She hadnât seen her sister in decades! I first thought there had been a conflict between the two of them. But, no, they had merely lost touch with each other. Each had gone her own way.
Our modern kin-free society would have been unthinkable to our ancestors and still is to most people on this planet. Ours is a society where you should treat strangers as you would your own kith and kin. To act otherwise is to break the rules.

How did this revolution come about? A long line of historians, going back to Marx and Weber, have argued that it all began in late medieval England. As summarized by Macfarlane (1978a), this view holds that England had previously been a kinship-based peasant society:

The basic element of society is not the individual, but the family, which acts as a unit of ownership, production and consumption. Parents and children are also co-owners and co-workers. The separation between the household and the economy which Weber thought to be a pre-requisite for the growth of capitalism has not occurred. For our purposes, the central feature is that ownership is not individualized. It was not the single individual who exclusively owned the productive resources, but rather the household.

[â¦] In this situation, farm labor is family labor. Hired labor is almost totally absent. Production is mainly for use, rather than for exchange in the market. Cash is only occasionally used within the local community. Land is not viewed as a commodity which can be easily bought and sold. There is a strong emotional identification with a particular geographical area.

[â¦] this totally different social and economic system was destroyed, above all in the sixteenth and seventeenth centuries, by a number of factors. Some lay stress on the expropriation of the peasantry, who then became a landless laboring force, others suggest that the growth of world trade and markets, encouraging the use of cash, severed the old face-to-face relationships. Others again stress the rise of a new acquisitive ethic which paralleled the rise of protestantism.

Whatever the cause, the basics of life were no longer being produced, exchanged, and consumed primarily among close kin. Markets had largely taken over this task. And they were no longer just marketplacesâdiscrete points of activity localized in space and time. These scattered points were growing and coalescing to form a true market economy. A web of production, exchange, and consumption was developing between people who were neither kith nor kin and, often, strangers to each other.

This view is challenged, however, by Alan Macfarlane in his book The Origins of English Individualism. He agrees that the end of the Middle Ages brought momentous changes to Englandâthe expansion of the market economy, the rise of parliamentary government, the beginnings of the scientific revolution, the advent of Protestantism, and the establishment of a colonial empireâbut these were consequences, and not causes, of a mindset that had been developing for some time. As early as the 13th century, individualism was already trumping kinship in England:

Recent work on thirteenth century manorial documents has uncovered a very extensive land market from at least the middle of the thirteenth century. There is rapidly accumulating evidence of the buying and selling of pieces of land by non-kin; the idea that land passed down in the family is now increasingly regarded as a fiction. Whether in Suffolk, Huntingdonshire, the Eastern Midlands, Berkshire or elsewhere, the evidence suggests that the supposedly free and the unfree were buying and selling land.

[â¦] It appears probable that in many areas of England in the period before the Black Death up to half of the adult population were primarily hired laborers. It was not parents and children who formed the basic unit of production, but parents with or without hired labor. This was only made possible by the widespread use of money. The work of Kosminsky and Postan has shown that commutation of labor services for cash was widespread by the middle of the twelfth century. Cash penetrated almost every relationship; selling, mortgaging and lending are apparent in many of the documents. Most objects, from labor to rights in all kinds of property, were marketable and had a price. Production was often for exchange rather than for use. (Macfarlane, 1978a)

Today, the consensus seems to be that Macfarlane is half-right. In the Middle Ages, England had already gone further toward social atomization than the rest of Europe. But loyalty to familyâin the sense of lineageâstill reigned supreme well into the post-medieval period. A study of an Essex manor between 1550 and 1750 found that most land holdings were still being passed down within the family:

English individualism seems to have developed gradually over a lengthy time span that began long before the end of the Middle Ages and continued long after. In particular, it was not a product of major events like the Black Death or the break with Roman Catholicism. It was instead driven by rather subtle behavioral and attitudinal changes that have eluded standard historical analysis.

In this, Alan Macfarlane is on the same page as Gregory Clark (2007; 2009a; 2009b), who argues that historical change in England was fueled by incremental changes in behavior and attitude from one generation to the next, which in turn reflected an incremental process of demographic, cultural, and even genetic change.

This process began with the imposition of Norman rule in the 11th century. England became a unified, pacified country and would remain so for the next millennium to a greater extent than elsewhere. This pacification extended to the local level, with the State now enforcing court rulings (previously the job of the aggrieved party and his kin). The violent young male went from hero to zero, his place now taken by the law-abiding man who bettered himself not through plunder but through work and trade. This was particularly so within the nascent middle class, whose descendants steadily grew in number and replaced the lower classes through downward mobility. Their class valuesâthrift, foresight, self-control, and sobrietyâeventually became national values.

Meanwhile, the State and the market economy were increasingly taking the place of close kin. People looked to the State for protection, and the State could provide it much more effectively and over a larger land area than blood relations ever could have. This freer environment also enabled the market economy to expand out of the marketplace and into every nook and cranny of society. People were no longer confined to dealing with close kin or long-time friends. They could trust total strangers. Blood relations thus became of minor importance, even obsolete.

Macfarlane is less willing than Clark to dwell on initial causes: âWhere this [behavioral] structure came from and hence its causes are problems for further investigation.â But he does spell out some consequences of not seeing English history clearly:

[â¦] to draw parallels between England and currently developing Third World peasantries without realizing the enormous differences which flow not merely from a disparity in wealth, but in the social, political and psychological sphere, is a recipe for disaster. If most contemporary countries are trying to move from “peasantry” to “urban-industrial” within a generation, whereas England moved from non-industrial but largely “capitalist” to “urban-industrial” over a period of at least six hundred years, it will be obvious that the trauma and difficulties will not only be very different but probably far more intense. Furthermore, if such countries absorb any form of western industrial technology, they are not merely incorporating a physical or economic product, but a vast set of individualistic attitudes and rights, family structure, patterns of geographical and social mobility which are very old, very durable, and highly idiosyncratic. They therefore need to consider whether the costs in terms of the loneliness, insecurity and family tensions which are associated with the English structure outweigh the economic benefits. (Macfarlane, 1978a)

Clark, G. (2009a). The indicted and the wealthy: surnames, reproductive success, genetic selection and social class in pre-industrial England. http://www.econ.ucdavis.edu/faculty/gclark/Farewell%20to%20Alms/Clark%20-Surnames.pdf Clark, G. (2009b). The domestication of Man: The social implications of Darwin. ArtefaCTos 2(1): 64-80. http://es.youscribe.com/catalogue/tous/conocimientos/tecnicas/the-domestication-of-man-the-social-implications-of-darwin-1845989

Macfarlane, A. (1978a). The origins of English individualism: Some surprises, Theory and society: renewal and critique in social theory, 6, 255-277.http://www.alanmacfarlane.com/TEXTS/Origins_HI.pdf

Macfarlane, A. (1978b). The Origins of English Individualism: The Family, Property and Social Transition, Oxford: Blackwell